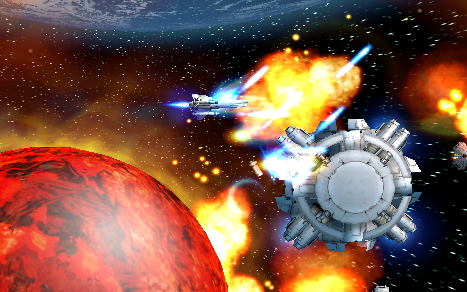 After the disappointing Gradius IV, the series needed a bit of a shake-up. For that, Konami brought in veteran game developers Treasure to design Gradius V. On the surface, it looks and feel like the earlier entries, but there are numerous changes that drastically alter the way the game is played. 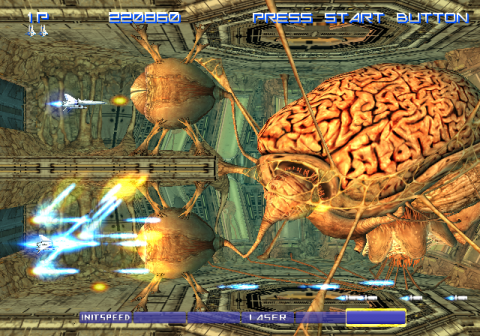 The game is still played on a 2D plane, of course, but all of the visuals are 3D, thanks in part to a graphics engine provided by G.Rev, the developer behind Border Down and Under Defeat. Gradius IV used polygonal graphics very sparsely, but they’re put to much greater use here, with dizzying backgrounds and fantastically designed bosses. The graphic style is actually a lot like Radiant Silvergun and Ikaruga, two of Treasure’s previous shooters. It has a hazy feel to it, consisting mostly of metallic browns and grays. Some of it looks absolutely fantastic, especially the army of pulsing Zelos cores floating above planet Gradius, but many of the stages lack the personality that the Gradius games are known for.

Compared to the previous Gradius titles, the stages are on the long side. And, for the most part, the “themed” stages are gone. There’s a biological level, much like in the previous games, but that’s about it. Even the Moais are completely missing. The first level is a space station in orbit around Earth, and the second stage ends with a boss rush – relatively early for a Gradius game. The fifth level takes place in an asteroid field – usually a cliche in shooters, but the screen is littered with rocks flying all over, without even a hint of slowdown. The sixth stage rotates back and forth as you fly forward, with drains spilling green gas all over the landscape. The seventh stage is the usual final base level. But what’s really cool about Gradius V is the time loop. 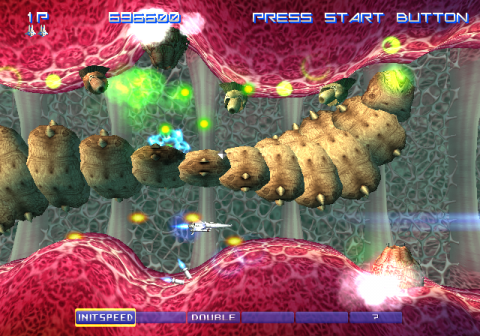 The second level begins with the opening of a wormhole. Two vessels fly out – a gigantic battleship, and another ship that appears to be exactly like the Vic Viper. The other pilot instructs you to help him take down his target, so the two of you split up and take different routes – he takes the top and you take the bottom. At the end, you help him open the final door to a huge monstrosity, then escape as the battleship blows up behind you.

The game continues up until the eighth stage, where you encounter the same battleship that you conquered earlier in the game. However, it requires that it be attacked from two different spots, and your single ship just isn’t up to the task. You solve this problem by transporting both yourself and the enemy vessel back in time. It’s here that the circle completes and you meet your past self from the second stage – except this time, you fly through the top route and get to destroy the boss, finally completing the game. The boss cries that he used to be called Venom, which ties Gradius V back to the MSX games. 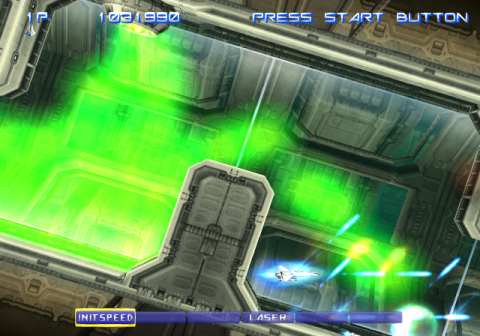 The music is also a big departure for the series. It’s composed by Hitoshi Sakimoto, who’s usually known for tense orchestral scores like in Final Fantasy Tactics and Radiant Silvergun. Some of this style shows through here, especially with the pounding drums, but most of the music is dark electronica. It lacks a strong melody, but has a catchy beat.

When the game first begins, the weapon selection seems a bit limited – just four configurations, with drastically limited power-ups. Once you beat the game, you unlock a variety of weapons, including the classic Ripple Laser, the Spread Bomb, the E-Laser from Gradius III, and the return of the Fire Blaster from the MSX Gradius 2. 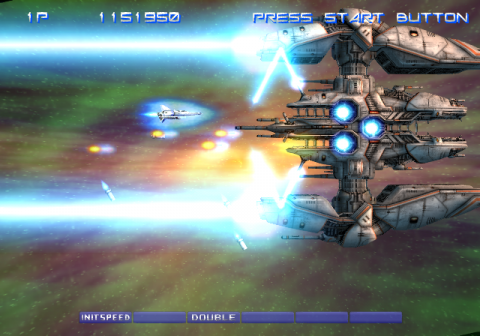 A new feature of Gradius V is the Option control. By holding down the R1 button, you can command your Options to do different things. The Freeze command will keep them in place, allowing you to focus your firepower. The Spacing command will make them spread vertically, allowing you to widen or tighten your attacks. The Rotate command tells them to spin around the ship.

By far the most impressive is the Direction command. When you hold down the R1 button, you’ll freeze the movement of your ship, but you can aim your weapons in any direction. It’s remarkably cool to fire your lasers and whip them around with the analog sticks, creating a wave of destruction. 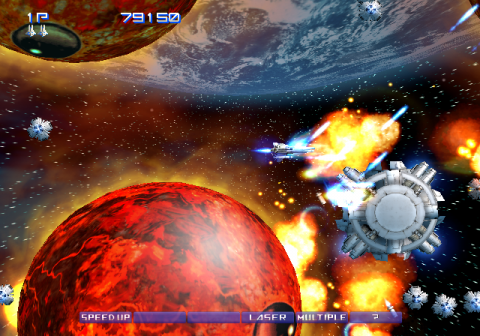 As awesome as this is, it kind of messes with one of the fundamental principles of Gradius. The game has always challenged you to balance power and versatility, and the limited range of your ship’s firepower is what has always given the series such a claustrophobic feeling. In Gradius V, there’s no need for a Double and barely any need for missiles – all you need to do is aim your Options and shoot. You can fire around any corner and hit practically anything on the screen. It makes for a remarkably different game, but that’s certainly not a mark against it, and helps keep the Gradius experience fresh.

Despite this power, Gradius V is still far from easy. The hitbox of the Vic Viper has been reduced, but Treasure sticks a lot more projectiles on the screen at once, especially in the aforementioned asteroid stage. To compensate for this, it borrows a few aspects from Salamander – most notably, the auto-resurrection option is turned on by default. You can enable the checkpoint system if you want, but the difficulty is so brutal – even on the easiest mode – that it’s not really balanced for it. It also allows you to regain Options after you’ve been killed. 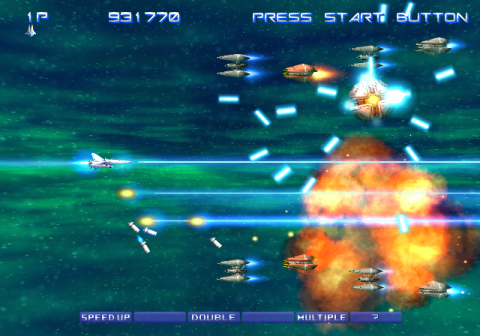 There’s also the return of the two-player mode, although both players have to share the Options between them. You also only have three credits at the beginning of the game. With each hour of play, you’ll get an extra credit, so if you keep at it long enough, eventually you’ll be able to get through it.

The changes in Gradius V mark a positive evolution for the series. Gradius Gaiden is perhaps the better title when it comes to stage design, but the Option controls make this one notably unique, and definitely one of the best shooters on the PS2.

Certain editions also came with a bonus DVD with assorted promo videos. This was included in the US as a pre-order bonus, dubbed “Gradius Breakdown”.