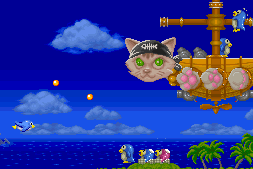 Arriving on the scene after Gradius III, Parodius Da! was first released in the arcade (its subtitle means “From Myth to Laughter”, a play on Gradius III‘s subtitle, “From Legend to Myth”.) The title means something like “It’s Parodius!”, but most of the time is simply referred to as “Parodius“, since that’s what’s written in English lettering.

There are four playable characters – Pentarou the penguin, Octopus the octopus, and the Vic Viper return from their stint in the MSX Parodius, while TwinBee makes its first appearance in this series. All four characters have distinct arsenals, similar to the four weapon loadouts in Gradius II. Each has their own ditty played during the navigation scenes. 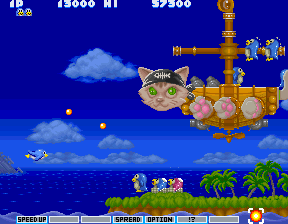 The 16-bit arcade hardware allows for much brighter, more attractive visuals than the MSX game. In the arcade game, there are a total of ten stages. The first takes place in a pirate themed ocean cove. It’s here where the famous cat-faced battleship is introduced, which mews adorably as you shoot it, then explodes after taking enough damage, with a simultaneously baffled/annoyed look on its face. The level boss is a flying penguin in a pirate outfit, one of the few returning enemies from the MSX game.

Subsequent levels include a circus, where the Moai heads are replaced with clowns, and the spider robot from Gradius II is replaced with a gigantic Vegas dancer (named Chichibinta Rika); a Japanese themed stage features cheery blossom trees that walk around on their own volition; an area full of pink clouds and bubbles; an ice cavern; and a pachinko-themed stage decorated with neon lights. Two level themes are recycled from the MSX game, though the layouts are completely different: a dessert level, and a graveyard level entitled “Night of the Living Dead”, filled with zombie penguins.  There’s also a battleship stage, similar to the one found in R-Type, where the screen slowly scrolls around as you dismember a giant vessel commanded by a variety of strange Moai heads. Some of the bosses include an eagle dressed as Uncle Sam; a spiked pufferfish that grows to nearly the size of the entire screen, similar to the rock monster boss from Super Castlevania IV; and a sumo pig, based off famous wrestler Asashio Tarou IV, who whips off its fundoshi (sumo undergarment) to attack. 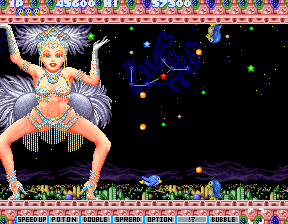 The bell system has been changed slightly, and most of the weirder abilities from the MSX game, like the warp powers, have been removed. You can obtain screen-clearing bombs, barrier lasers, and a megaphone, which spouts various goofy, halfway nonsensical phrases that can damage enemies. Most of them are in Japanese (“Do you believe in God?”, ”I want a girlfriend!”, “Call me queen!”), but are a few are universally understandable, like the quadratic formula. These are all secondary weapons, but there’s a defensive ability too – the ability to grow to jumbo size, which grants temporary invulnerability.

The difficulty has been lowered to match its lighter tone. While the arcade Gradius games technically offered various levels of difficulty, the “easiest” ones were still brutally difficult. Not so with Parodius Da!, where the lower levels are approachable for novices, while the higher levels still prove a challenge for experts. 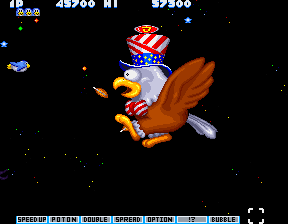 Much of the soundtrack, again, consists of classical music, and the richer arcade synth makes them sound much better than the MSX version. Songs include the “Can Can”, “Waltz of the Flowers” from The Nutcracker Suite, as well as tracks from Gradius games. Like Gradius, on the high score entry you can pick your gender, but there are also several “other” options, including an alien, a baby, a Moai, or a pair of boobs.

Parodius Da! is a great game, but it really is just Gradius with different levels, graphics and music. Subsequent titles not only develop the humor but also offer some gameplay variations that make it stand out a little more.

The best of the console ports is the Super Famicom version. It looks almost identical, and outside of some slowdown, plays faithfully too. It includes an extra level that takes place in a bathhouse, and an “omake” mode, which is a bonus level. This version was released in Europe, which translates the megaphone messages (“Shaving is boring”, “Toaster overheated”) and renames the “omake” mode to “lollipop”. 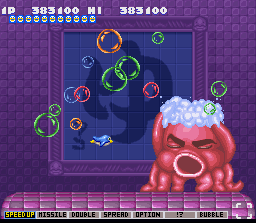 There is, however, an odd bit of censorship. In the arcade version, the Vegas dancer would occasionally stop, make a moan and swing her hips. Despite her skimpy outfit, apparently that hip sway was just too much for the folks at Nintendo of Japan, so it was removed from the Super Famicom version. To make up for it, there’s an extra phrase in the megaphone attack – “Koshi fura sete yo!” (“Swing those hips!”).

The PC Engine port looks decent, but it’s not as faithful as the SFC version. The screens needs to scroll up and down to fit the playing field, the music is somewhat downgraded, and there’s some noticeable flicker. The Moai battleship and ice cavern stages are also missing. However, the Vegas dancer hip shake is in this version. There’s a new, rather strange intro in this version, with what appears to be the various enemies holding a festival. There’s also an exclusive score attack “omake” level available on the title screen, though it’s completely different from the SFC version.

There are a number of different bosses in this mode, depending on your final score. Gain more than 1,000,000 and you’ll face off against the Super DX Emperor Penguin, who sits atop a throne and wears a turban. Gain between 900,000 and 1,000,000 and you fight the Lord of Gourmet Manjiri-kun, the multi-armed statue that appears in the dessert stage. Score less than 30,000 points and you’ll face The Great Green Mantle, a penguin with a cape and thief’s mask.

The 8-bit Famicom / NES port holds up remarkably well. The graphics still manage to look pretty good for the system, despite the slowdown and flickering that was common for shooters on the platform. The megaphone bell power up is missing, and it’s replaced by a white bell that will grant a 1up. The music is decent, though the voices are gone.

Several levels are missing, including the Japanese mountain level, the pachinko level, and cloud level. The cemetery level has been drastically shortened to a small part at the end of the third stage. The Vegas girl was changed into a carnival barker named Miss Mishitarina, with striped pants and silly hat. The biggest addition is an entirely new level that takes place in a carnival. Out of all of the console exclusive levels, this is probably the best one. It features a roller coaster, which your character can hop into, though it doesn’t do much beyond speeding up your journey through the level. There are two new bosses – a strange Moai pirate ship with spiked poles, and the even stranger duck boat. There’s a new bonus stage where you can fly into the interior of the Moai battleship by destroying and entering its mouth. There’s also a different ending message in this version too. This port came out in Europe as well.

Parodius Da! also showed up in handheld form for the Game Boy. It’s missing the ice cavern, pink clouds, and cemetery levels. You can pick which stage you want to start on, though you need to play all of them if you want to get to the eighth and final stage. The new exclusive level is a crystal cavern. This stage begins with crystal chunks that break into parts when you shoot them, like Gradius II. The end boss is piloted by the brain from Life Force / Salamander, but otherwise it’s not a tremendously great level. There’s also an extra hidden bonus zone in this area, as well as an extra midboss, a parody of the Gunwall, in the pachinko stage. There’s quite a bit of flicker in here, although it’s still playable. As a neat addition, the character’s ages are all added on the player select screen – Vic Viper is quite ancient at the relatively old age of 58. This version was also released in Europe, and rereleased on the Konami Classics Vol. 4 compilation pack. 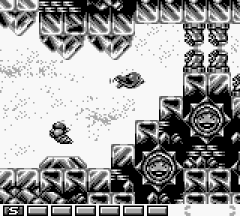 The X68000 version is almost a precise port of the arcade version, although the music has been changed to accommodate the computer’s MIDI generator. The status bar is also black rather than transparent.

The PlayStation and Saturn version, featured on the Parodius Deluxe Pack, is based off the arcade game, and is almost a perfect port. There’s an extra hidden stage, based on the battleship boss from the fourth level of Thunder Cross, reimagined as an intergalactic train.  To reach this, in the navigation area before stage 2, kill all the enemies in the first formation of bad guys, then only hit the first enemy in second formation. Don’t attack anything else, and soon everything will explode and take you to the alternate level. Both platforms are basically the same, other than a few extra background layers in the Saturn version. The Saturn version was also released in Europe. 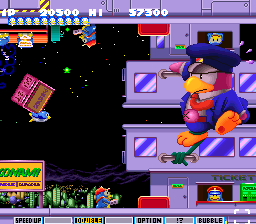 The version featured on the PSP Parodius Portable collection is another port of the arcade version, but without any extra levels. However, there are extra options, like additional difficulty tweaks. There’s also an option for a remixed soundtrack, which is mostly the same as the arcade but slightly cleaner. The theme of the fourth stage was originally “The Sabre Dance” but was changed to “Hungarian Dance No. 5”. 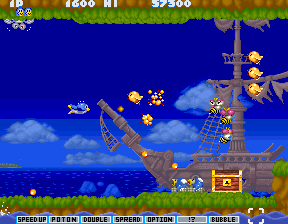 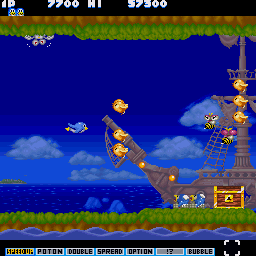 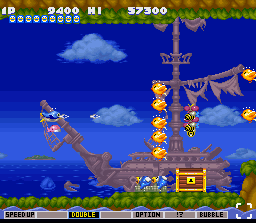 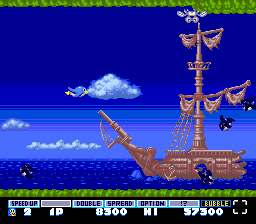