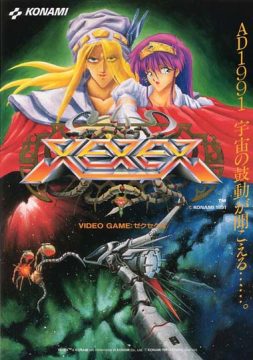 Released in 1991, Xexex (pronounced “zeks-zeks”) is perhaps the ultimate Konami shooter, a culmination of the craft they had honed over the past decade. Visually it’s unlike anything Konami has ever done, and mechanically it stands apart from their line up too. The game was initially advertised to Western audiences under the name Orius. 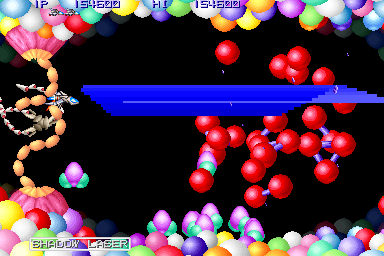 The story involves saving the planet E-Square from a rather effeminate looking evil lord. Each stage is punctuated with a cutscene of Princess Elaine La Tias crying for help as she’s tortured by the evil Lord Klaus Pachelbel. As the game goes on, she begins to lose clothing – not unlike Artemis from Namco’s Phelios.

The action feels more like R-Type than Gradius. Your ship, the Flintlock, has one of several weapons (at least, in the Japanese version), but it also has a floating orb attachment called a Flint. When the orb is separated from the ship, it flies around and attacks enemies, and your ship can auto-fire its primary weapon. As the orb becomes more powerful, it grows more tentacles, naturally making it more dangerous. When the orb is attached to the ship, it can be used to charge a power shot, which fires a huge, electrified tentacle that reaches across the screen. The main weapons consist of the Photon Beam, a standard laser; the Ground Laser, which shoots downward and moves across the surface, similar to a weapon from R-Type; the Spiral Laser, which has tremendous width; the Homing Laser fires in a single laser forward, as well as two other beams that bend upward and downward; and the Shadow Laser, one of the coolest, which is a standard laser that creates a damaging shadow as your move your ship up and down.

Each of the game’s seven stages are gorgeously detailed, with a unique theme and incredible technical effects to go along with it. The first stage takes place in some kind of crystal planet, with a hypnotic green background. The second stage is filled with colored orbs, sort of like those molecule diagrams from science classes, which break apart from the scenery, spin around, and try to crash into your ship. 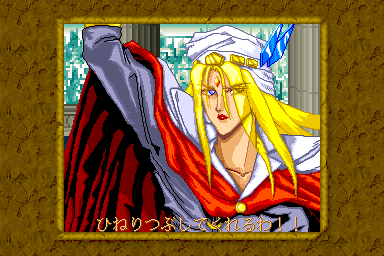 The third stage is against the pink backdrop of an alien planet, amid floating islands with suspended water, and a small moon rotating in the background. The fourth stage is a biological nightmare, with walls that shift and creep back and forth. This would later form the basis for several other stages in the Gradius games. The fifth stage looks like a virtual reality simulator, with the level boss using a shield that has a polygonal portrait of head, which speaks in a garbled language.

The sixth stage continues with your ship jumping in and out of hyperspace, fighting enemies along the way. The seventh stage starts off against the backdrop of a galaxy, until the background is bent to the side – an insanely cool effect – as you’re warped into the entrance of the final battle cruiser. Of course, in keeping with the R-Type / Gradius tradition, Xexex is incredibly difficult. In the Japanese version, the Flintlock can only take a single hit before dying, sending you back to the most recent checkpoint. After dying, your shattered ship reassembles into a single whole and begins a new life, which is a throwaway effect that looks remarkably cool. The difficulty ramps up by the third stage, and doesn’t let up all the way to the end, making it particularly brutal, especially since there aren’t any shield power-ups, or anything to absorb enemy bullets.

The World version, however, switches things up quite a bit. You only have a single life, but the Flintlock can take multiple hits, indicated by an energy bar at the top of the screen. When it runs out, the ship explodes, and you need to continue, but you’ll resurrect right where you left off. The checkpoint system is completely gone. There’s a two-player simultaneous option, with the second player piloting a ship with an orange color scheme. This might seem like it would make things less frustrating – and it does – but they also hacked out almost the entire weapon system. You only get the standard laser, which can be upgraded a few levels, and homing missiles, and that’s it. Furthermore, the rapid fire functionality is completely gone. It’s clearly the inferior game. The World version also features text in English – although the voiceovers are still in Japanese – and actual titles for the levels. In the Japanese version, each level just begins with the text “CHARGE THE ENEMY”.

There’s some odd bits about the game too. Upon getting a Game Over, you obtain a Japanese-style fortune reading. In the ending, the Flint is sent down to the planet, where it morphs into a naked fairy, and then leads into the end credits, which features super deformed versions of the staff bouncing around the screen. It ends with an uplifting message – “We continue to produce the games you love.” The bootup screen has a similar message – “Our dreams come true.” It seems like this was a true labor of love. The problem with Xexex‘s technical achievements is that it was too intensive to be ported to any of the 16-bit consoles without drastically downgrading it. There were reportedly plans for a PC Engine port, but they were scrapped. By the time the Saturn and PlayStation came along, the game was three years old, and probably a bit too old to be ported. Additionally, Xexex was released the same year as Street Fighter II, so it was not nearly as successful as Konami had hoped. The company did not publish another arcade shooter until Gokujou Parodius, released three years later.

For years, the closest thing anyone got was a minigame stage in Ganbare Goemon 2 for the Super Famicom, where you could play a variation of the second stage in a small window. Even this scaled back version features large amounts of slowdown.

There were plans for a port to the PlayStation 2 as part of Hamster’s Oretachi Geesen Zoku line, much like Thunder Cross, but it was also canceled. Instead, Konami released it themselves on the Salamander Portable collection for the PSP in 2007. It’s more or less arcade perfect, including options for pixel perfect ratios or an upscaled, stretched display to fit the whole screen. It uses the Japanese version of the game, thankfully.