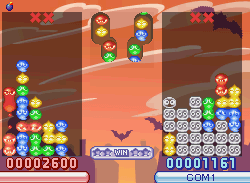 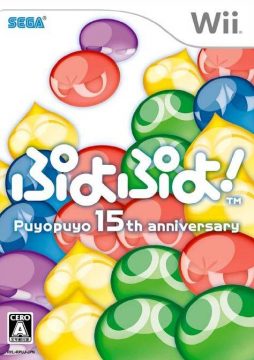 Many game series release a game in celebration of an anniversary, and the Puyo series is no different. PuyoPuyo 15th Anniversary is meant to be a reflection upon the entire series as a whole – not just the games that Sega created – and it does so quite well. Though one would just expect a rehash of the previous games, PuyoPuyo 15th Anniversary not only introduces entirely new game modes, but changes up the basic formula of how the game advances, setting the standard for the later games in the series.

The main draw of the game is the wide variety of game modes to toy with. Not only are you able to play using the rules of PuyoPuyo, Tsu, and Fever, but a total of nine new modes of play are brought into the game, which are certain to hold anyone’s interest for a great deal of time.

The grid for a match is now a 3×6 size, and size of puyo are obviously increased. In order to make up for this, though, you only need 3 puyo to form a chain, the power of which have been reduced to accomodate for the size change. Puyo Puyo Tsu rules of dropsets apply, though Fever rules apply for offsetting.

Nuisance puyo are now replaced with bombs – one line of nuisance puyo is equivilant to one bomb. When a bomb drops down, you have four turns to clear it as if it were a nuisance puyo before it explodes, turning the surrounding puyo into hard puyo. Bombs can even cause chain reactions with each other. Puyo Puyo Tsu rules of offsetting and dropsets apply.

Players are put into an endless fever mode. What stops the players from attacking each other is that they have to clear a set of nuisance puyo beforehand (they don’t drop if you don’t chain, so they’re just there as a way to block you from attacking). Offsetting all of said nuisance puyo allows you to finally send nuisance puyo to the opposition – these nuisance puyo will drop down if an opponent makes a move without setting off a chain, putting a huge deal of pressure on them.

A star is placed down in the same location upon players’ grids, surrounded by hard puyo, and then the grid is halfway filled with a random assortment of normal puyo. The goal is to erase the star as if it were a nuisance puyo, as doing so sends a huge amount of nuisance puyo to your opposition. The strength of a normal chain has been reduced dramatically so that getting to the bottom isn’t too difficult. Puyo Puyo Tsu rules of dropsets apply.

Instead of sending nuisance puyo, frozen puyo are dropped down. After three turns, these puyo thaw out and are able to be used for chains, which may very well happen if you don’t send enough. Every player has their own unique pattern of frozen puyo that they send over. Puyo Puyo Fever rules of offsetting, but Tsu rules of dropsets.

A competitive mission mode. Complete four tasks before the opposition, and you win. Puyo Puyo Tsu rules of dropsets means everyone has an equal chance to clear the random tasks.

A player’s entire grid is dark, save for a searchlight that moves from side to side, illuminating puyo. As your puyo get stacked closer to the top, the searchlight moves faster, giving you more of a chance to make a comeback. Puyo Puyo Fever rules of offsetting and dropsets, though what’s interesting is that fever mode is at play here as well – fever mode thankfully has its whole grid illuminated.

After ten seconds, everyone’s entire grid spins 180 degrees, making puyo fall from the top to the bottom. The board won’t do so until everyone has placed their puyo down, and everyone is forced to wait until this happens. Positioning your puyo so that a chain happens after the spin powers up the stregth of said chain. Puyo Puyo Fever rules of offsetting, but Tsu rules of dropsets.

Players drop puyo in water, where they’ll float as close to the surface as possible. Positioning of puyo can be quite difficult because of this. If even one puyo comes out above water due to said water filling up, you lose. Puyo Puyo Tsu rules of dropsets, though something to take note of is that nuisance puyo won’t fall until at least one line has been accumulated; only lines will fall afterwords. If you’ve accumulated three lines of nuisance puyo and two nuisance puyo extra, for example, three lines will fall and the two extra will carry over. Thankfully, you can offset. 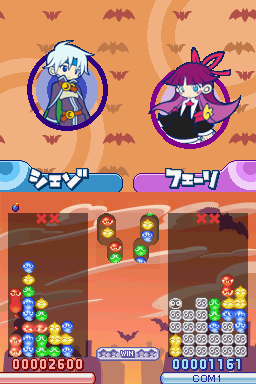 Something quite nice is that you’re able to customize the rulesets of certain modes if you play them outside of story mode, such as making bombs take from 1 to 9 turns to explode, or having the spinner’s timer be anywhere from 2 seconds to 20. It’s a nice addition which serves to add some diversity if you aren’t satisfied with the default rules.

The story is something that got overhauled massively, as well. Though the plot is as simple as ever – a tournament is held, and everyone wants to win it in order to win a medal that can grant a single wish – you’re able to play through said mode with an unprecedented amount of 22 characters, each fighting eight opponents. The cutscenes are something that got changed as well; instead of the usual spritework for the characters, there are now portraits of them that change depending on their actions, a tactic used by many other games. Unfortunately, this can lead to every character’s story feeling a bit repetitive, since there’s not much that sets them apart. Indeed, where there would usually be graphics at the end of a character’s storyline in the earlier games, there’s none in this game (or the ones that follow), possibly due to space restrictions. This also means that you can’t really see the characters’ expressions and actions as well as the other games, so it may be hard to get invested at first. However, the dialogue is still as fun and engaging as ever, so it’s still a nice enough experience to play through.

Although there are no new characters, six more characters from the Compile-era puyo series make a return alongside Arle. Only four of them (Schezo, Rulue, Satan, and Suketoudara) manage to stay around for the later games in the series, but it at least set the precedent for some characters to start returning. Even though this is their first time handling the characters as protagonists of their own stories, Sega managed to keep their personalities as intact as possible, easily pleasing fans.

Thankfully, the fun doesn’t end in story mode. There are still the traditional endless fever, puyo, and mission modes, though the endless battle mode of Puyo Puyo Fever 2 has been brought over as well, and even improved upon. Whereas in Puyo Puyo Fever 2 you would have to wait after every battle through a menu to select an item if you wished and then wait again for the game to seemingly load the next opponent, here the battles take place one after another in a much more fluid manner. Because of this, you’re forced to keep your placement of puyo from battle to battle, upping the challenge and allowing for a bit more strategy. Not only are you able to battle in this mode with the Fever mode, but you’re also able to battle using Puyo Puyo and Tsu’s rulesets, increasing the replay value slightly. 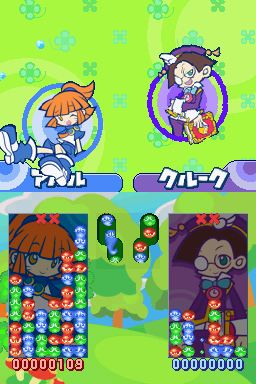 Finally, as a first for the series, a lesson mode has been included. However, unlike the “lesson mode” in fever where you’re merely given general advice on how to play the game, this mode massively helps players out by teaching them how to create patterns of chains, based on ones that professional players have done in the past and still continue to do.

To start, the lesson mode offers up three patterns of chains for players to practice. The first of these chains is what’s known as the “stairs” pattern. In it, you stack a vertical column of same colored puyo 3 tall, and then place a different colored puyo on top. The color of this puyo matches the column next to the stack, and so on. This is the beginner chain: it’s rather easy to preform since there’s little planning needed, though its main drawback is that if you don’t get the exact puyo you need, or if your opponent creates pressure, it can be hard to adapt. Still, it teaches you the basics of how to chain, and should be learned as quickly as possible.

The second of these chains is what’s called the “sandwich” pattern. In this, you simply place a different colored puyo in between a group of four like-colored puyo, and work off from there. This builds off of the knowledge gained from the stairs pattern, and even allows you to combine the two patterns. This gives you a higher amount of chains, and you’re far less likely to waste puyo by setting said chains up.

However, both of these chains have a common problem upon learning them, in that once you stack them horizontally and basically fill the bottom rows, it can be a bit hard to continue them without some help. The third lesson, “transitioning”, gives you the help needed to extend said chains and create quite the large amount.

Even though it’s a first for the series, each lesson is quite comprehensive; not only is each divided into three sections, but after every section, you’re given a test where you have to replicate each chain given to you a total of five times. Even after the lesson is complete, you’re still not done, however. Each lesson comes with a total of 100 drills for you to practice further, with really hammers the knowledge down. With a great lesson mode with a large deal of practice, this makes Puyo Puyo 15th Anniversary the best game for beginners to start with.

Puyo Puyo 15th Anniversary is definitely a game many should check out. With its large amount of modes to play, and huge cast of characters to play with, it’s a game that you’ll find yourself occupied with for a great deal of time.