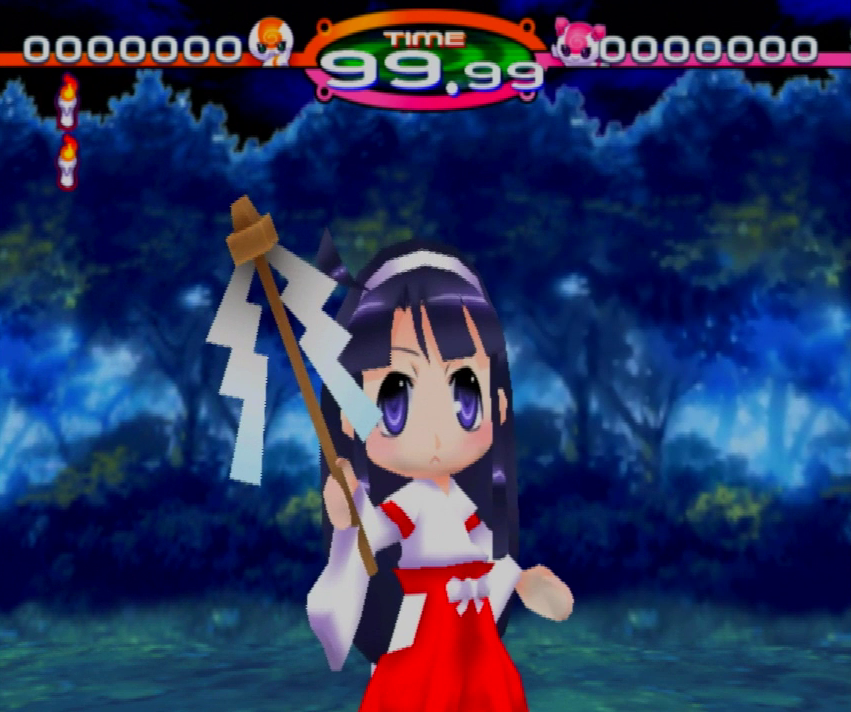 As the beloved protagonist of an arcade hit that turned into a successful series, Sayo-chan naturally found her way into plenty of Taito games and other surprising places. The Famicom era saw several appearances from Sayo-chan, including a cameo in the ending of Fudou Myououden (Demon Sword outside of Japan) as the significant other of protagonist Ashura as well as the home port of Rainbow Islands featuring an entire world themed around Kiki Kaikai that culminates with a boss fight against Manuke posing as Sayo-chan. Golf-kko Open features an even more elaborate role for Sayo-chan; if you make enough mistakes on a particular hole under specific, obtuse circumstances, Sayo-chan will come to save you from a Hashiritai and then offer to play golf with you! She brings her gohei to use as a golf club and it’s also possible to trigger a hidden scene where she appears in a swimsuit.

Even with the series all but buried prior to Reshrined’s release, Sayo-chan kept surviving through cameos in newer titles. The Wii minigame collection called FuruFuru Park features minigames based on Taito properties like Bubble Bobble and Kiki Kaikai. The Kiki Kaikai minigame is impressively elaborate, featuring a simplified take on the first level ofthe arcade game that ends with a boss fight against Zuzu/Bean Head, who you can now stun by reflecting projectiles back at him. Elevator Action Deluxe features several DLC characters, one of which is Sayo-chan. FuruFuru Park and Elevator Action Deluxe are notable for being two of Sayo-chan’s few appearances in 3D alongside occasional collaborations in games like Spelunker World. The music of Kiki KaiKai is nostalgic and memorable enough that it oftentimes comes included with Sayo-chan’s cameos, so it’s only natural that Taito’s Groove Coaster series includes various remixes of it. This series tends to put a lot of tracks behind DLC, but the Switch version, Groove Coaster: Wai Wai Party!!!!, features an unlockable Kiki Kaikai song in the base game. In terms of cameos outside of video games, there’s the manga/anime Hi Score Girl; among its many video game references is the PC Engine version of Kiki Kaikai, which has its box art and some gameplay shown for a moment during an episode in which two characters explore the wonders of the PC Engine.

Return of the Ninja