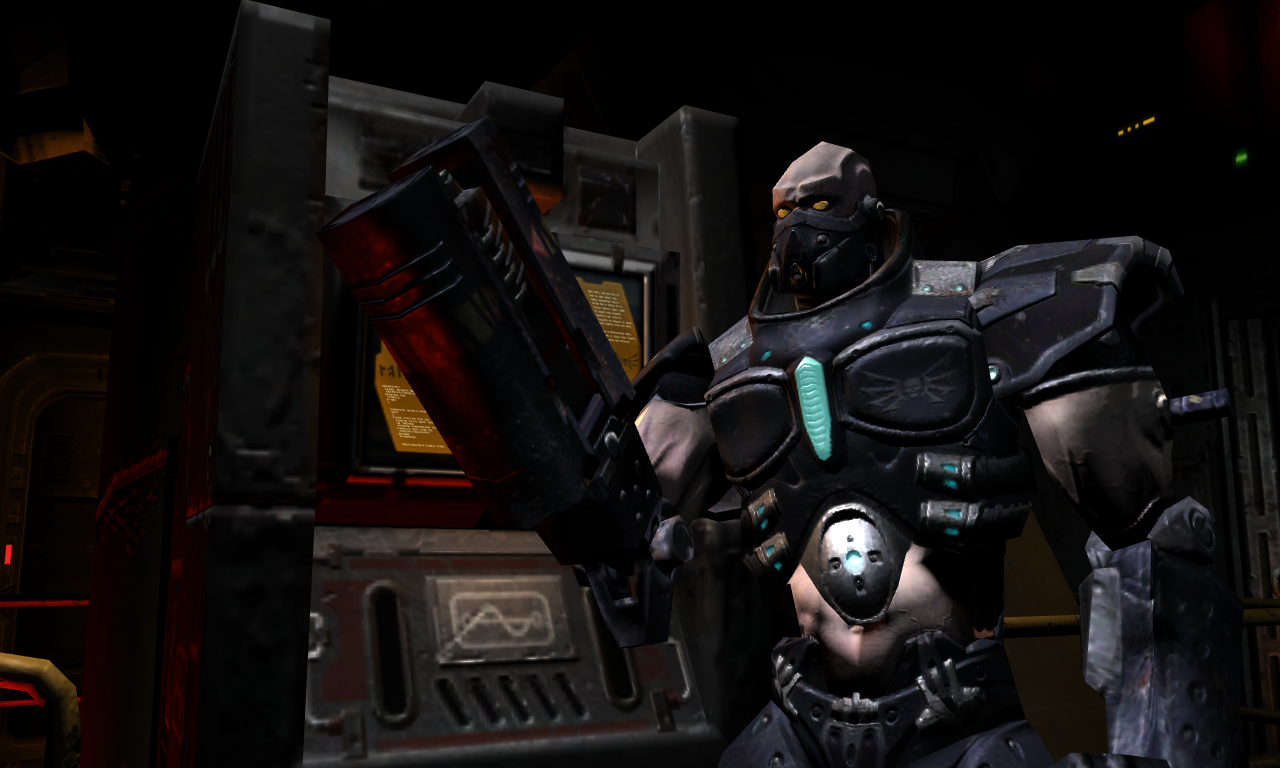 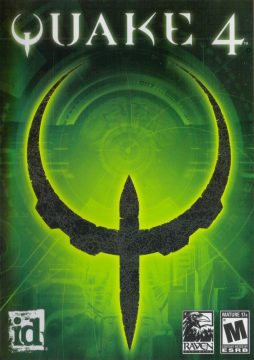 Quake 4 was the last game with a proper single player campaign in the franchise, and the game that perfectly defined the gory, biopunk obsessed menace of the Strogg. It isn’t really remembered all that well, but that’s not too surprising with the period it released. Raven’s take on the series was co-developed alongside the tad sluggish DOOM 3, which people were mixed on and still are to this day, with a somewhat similar design style. 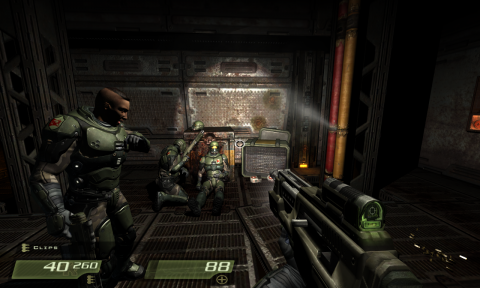 It was also an Xbox 360 launch title, and that port did indeed suffer from some choppy frames and slow down. It was id Software trying harder to get into the growing console market, though it’s hard to say if the sluggish nature of Quake 4 was due to trying to copy the Halo formula a bit for a game easier to play with joysticks, or because of the DOOM 3 similarities.

The issue is less that Quake 4 is bad, far from it, but very different from both the classic id Software style and their fleshed out modern style, the awkward teen years where they couldn’t decide between atmosphere and gameplay. Of that era, this is probably the best of the bunch, and the most fitting representation of the Quake II-verse. It takes place just after Bitterman destroyed the “Big Gun,” the invasion of the Strogg home planet starting up in force. Your guy, Kane, has to help the Rhino Squad and other marines topside take down the Strogg infrastructure and destroy the nexus core, a sort of hivemind that commands their armies. 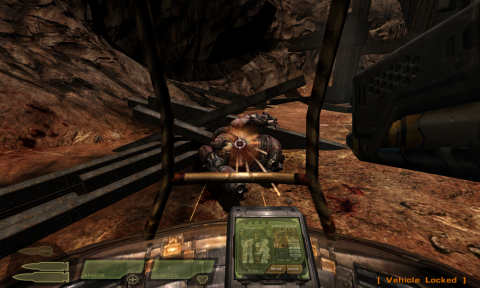 The narrative bones of Quake II are fleshed out here, with characters and arcs abound. The marines are characterized about how you expect and all look very similar due to how chunky models in id Tech 4 tend to look, but you get the occasional surprise. Strauss sticks out in particular, a seemingly cowardly and egotistical tech who proves to be your closest ally and a survivor who helps create the final master plan to win the day. There’s also a brilliant and downright gnarly scene halfway through the game that flips the narrative a bit, probably the game’s most infamous moment and lasting legacy for very good reason. The campaign feels like a proper story and adventure, even managing to outdo DOOM 3 in that respect by throwing out audio logs for live characters for most of the stretch.

The moody DOOM 3 lighting and comm chatter make for an engaging experience, as do the addition of bot controlled NPC allies. You can even ask medics and techies to heal and repair your armor. You really feel like you’re in the trenches, and the Strogg are made up in more intimidating forms. The berserker now has a nasty electric attack and comes at you like a freight train, and the new brawlers are weird looking tech gorillas with rage modes. Every enemy is unique and memorable in design and ability, a huge improvement over Quake II. 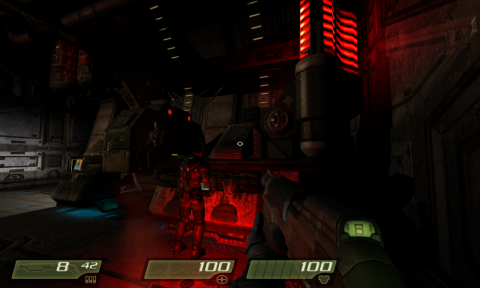 New enemy types keep getting thrown at you the entire campaign, including a send up to the parasite in a weird dog monster with an enemy spawning teleporter on its back. Iron maidens are turned into weird, ghost-like floaters who can phase in an out. Even the tanks are replaced with big bulky boys of a variety of power and movement style. There are even genuinely memorable challenges scattered throughout, one of the final rooms throwing multiple flying tanks at you, the most dangerous normal enemy in the game, testing your ability to aim, dodge, and make the most of your ammo.

The arsenal this time around is a lot of the greatest hits of the Quake and DOOM franchises, mixing in a single shotgun instead of two variants ala DOOM 3. Your two weakest weapons, the blaster and machinegun, also may actually come out now because they’re the only weapons with flashlights, a solid solution to the light issue from DOOM 3 by giving you offensive options but limiting them severely. It keeps the tension up without the obnoxious forced helplessness, further helped by dark areas being toned down a bit with more open area sprawls and mobs. 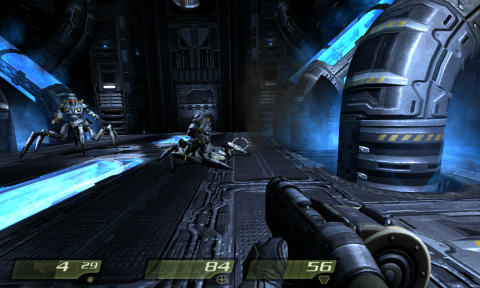 Old goodies like the nail gun also get new tricks as you play through the campaign via earned upgrades, like homing nails when you’re using your sights on an enemy. The BFG is sadly replaced by the less useful dark matter gun, which does nothing to high tier enemies (which is most enemies), but chain lightning and wall bouncing hypershots kind of make up for this lacking bit. Multiplayer also includes the gauntlet and the napalm launcher, which sets those hit on fire.

This was an interesting release because the switch in development focus from deathmatching gave the game some push back. This was partly due to limited play options at launch, though tons more eventually came as time went on. Quake was a multiplayer focused franchise at this point, and breaking away from that by 2005 was a mistake in some sense. The fanbase didn’t really accept the game at first, though like DOOM 3, they learned to respect it for what it was over time. Didn’t really stop the competitive scene drying up by 2007. 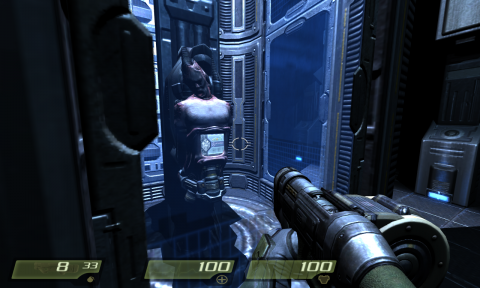 There is also the issue of the turret and vehicle sections. The Halo era of FPS games really ran with the idea of controlling battle tanks and such, a great way to work in slower gameplay for console players. Quake 4 does use these scenes well for the sake of pushing the overall feel of chaotic battle with the loud and abrasive sound design, and they offer some fun challenge here or there, but they often just feel like padding – as was common for the era. They’re specific segments instead of additions on a map you can make use of, and they’re so clunky at times that it’s hard not to be a bit frustrated with them, especially if you’re used to the speedy gameplay of old school id and Raven games. Kind of a pace killer.

Still, you could argue this is kind of the definitive Raven game. They had a habit of taking established id Software formulas and adding their own twists and ideas to it, and that has resulted in some of the most interesting games in the greater id catalog. Quake 4 took the ideas and structure of DOOM 3 and made them more action focused, keeping a similar atmosphere drenched in gory goodness. The look of the Strogg in this game is incredible and genuinely iconic to how they’d look in all future appearances. Their twisted bases were also loaded with cool details, like human torsos turned into batteries and computer parts, or chopped up people in frozen storage. The zombie segment even works great due to how it connects to “Stroggification” performed on captured marines to make more Strogg soldiers. 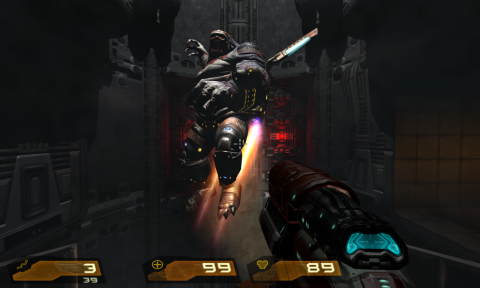 Quake 4, as a result, somehow both feels like a relic of the time and something very unique and of itself. That’s what Raven did best, from their start with the DOOM engine-made Heretic to their take on Wolfenstein. They did a spin on something familiar, and you could make out the ambition and creativity in the details. The weird ideas applied to your arsenal, like the simple brilliance of turning the railgun into the game’s sniper rifle, and enemies and world kept it feeling fresh in play, as did the surprisingly engaging story. Even if it’s not the height of storytelling, you will want to win the fight at the end, especially after this game’s version of the drop ship scene from Quake II‘s starting FMV being much more rad in-game. They even made the Strogg leader a petty jerk who laughed at you all the time, a tiny addition that gives the game just that much more character.

It’s hard to say what the Quake franchise’s future will be at this point. While things have improved in terms of releasing games since the gap between DOOM 3 and RAGE, id Software still takes their time with development. If a third party studio gets a chance, it’s hard to say who it would even be with Microsoft now in control. Still, it’s hard to say we’ve seen the last of Quake with Champions, especially with DOOM Eternal doing so well and the “boomer shooter” retro craze in full effect. This bizarre mixing of three sub-series still has life in it, and as long as that’s the case, there’s gonna be those wanting to see some more Quake.