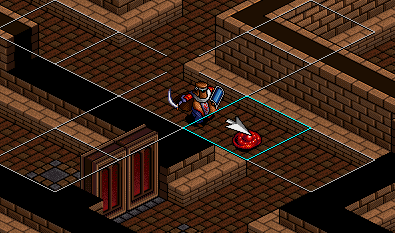 The final Brandish game drastically retooled the formula in order to attract a new audience. In fact, it was originally conceived as a totally different game, but became a Brandish title due to the similarities in the interface and basic gameplay. The overhead rotating viewpoint has been ditched entirely and replaced with an isometric stationary viewpoint. The result is a game that’s faster and less confusing. On the flip side, all enemies are now visible, even if they’re behind walls, making it a much less tense experience. 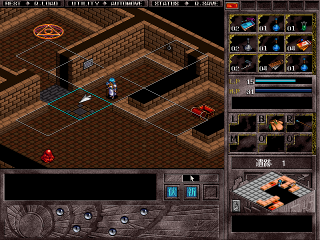 Additionally, the cast and story of the previous Brandish games has been left behind, with a totally new set of faces. Unlike Brandish 3, each character has their own unique story mode, which has them playing through different maps. You’ll often run into other player characters in your quest, and how you respond to them can change your character’s alignment, which in turn will affect the ending. The Fata Morgana Templum (or “Tower of the Sleeping God”, also known as the Victim’s Tower, which is where the “VT” part of the title comes from) is a huge tower in the middle of the desert (think like the Tower of Darm from Ys), and all characters have their own reasons for exploring it.

A young boy wielding a flame whip, who starts off the game in a dingy, dark prison. His class is a “stalker,” which is a kind of ranger according to AD&D.

Clare is a young elf girl with magical powers and a tragic past. Through the course of the game, she transforms into various types of demi-beasts.

This masked sword wielding guy is all kinds of mysterious. “Quien” means “who” in Spanish, which lends to the mystique in some weird way. He is initially locked in the PC98 version.

Brandish still needed some kind of sexy sorceress, and Mermelada fills that role nicely. She can also turn into a cat. Her name means “marmalade” in Spanish. She is only playable in the Windows version, Brandish 4.

This fistfighting warrior shows as an NPC in various chapters of Brandish VT, but was given his own chapter in the Windows version. Yes, “Garahad” is the official spelling of his name – Falcom’s a bit off when it comes to English names. 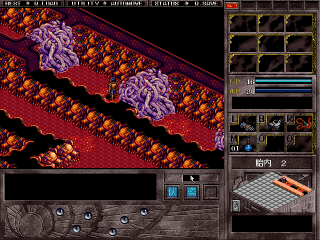 Two years after the release of Brandish VT, Falcom ported the game to Windows and renamed it Brandish 4. Other than a redesigned interface and some slightly improved graphics, it plays almost exactly the same. However, a few new scenarios have been added (Mermelada’s and Garahad’s), bringing the total number of playable characters from three to five. The Windows version features improved streamed audio, although it’s not redbook, so the quality is a bit degraded. The music is good, but it’s more up tempo than the other Brandish games. In some ways it fits in with the game’s faster, less methoical pace, but it still feels like it’s more suited for a Sorcerian game. The whack-a-mole minigame found in the casinos is also included as a separate application called “Hammer Slime”.

A big thanks to MP83 for supplying some of the hard-to-find disk images, and ReyVGM for aid with screenshots from the first SNES game.