The original Crime Fighters was never an especially well-loved game, both during its time in the arcades and its second chance on emulators such as MAME. It’s fortunate that Konami gave the property another shot, however, as it led to what’s probably one of their most unique and more memorable brawlers. Unfortunately, it’s also one that didn’t get a home console port for thirty years, meaning that it wasn’t until emulation that people would truly get to enjoy it.

Somewhere in the slum of Dead End City (perhaps not quite as much of a red flag as ‘Crime City’, if not by much, the Dead End Gang captures Kate, the “protégé” of one of the members of rival gang “The Cobras”. Unfortunately for the Dead End Gang, the Cobras consists entirely of four people who look suspiciously like Hulk Hogan, Mr. T, Jean-Claude Van Damme, and possibly Billy Dee Williams. Having brought down the force of what the 80s would consider some of the most manliest men alive, the Dead End Gang will now proceed to get beaten up and down the city until Kate is safely returned. It’s a standard beat em up plot, with very brief cutscenes to warn you about the upcoming boss. Of course, this should be an issue to no fans of the genre. 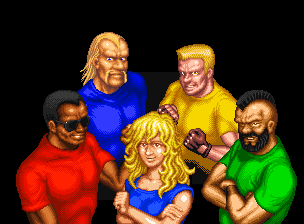 (Pro tip: Sledge is generally the best choice, because his ‘hit a grounded enemy’ animation makes it looks like he’s teabagging the mooks.)

The general basics of gameplay haven’t changed much since the original game. Each of the characters now has a distinct look as well as their own animations, even if the properties of their moves don’t change all that much. The controls generally work the same way as in the original game as well, featuring a button for punches, one for kicks, with stronger attacks performed by pressing both together. There’s a handful of new moves as well, such as the ability to kick while prone to push back oncoming enemies. 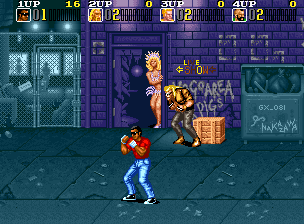 While Crime Fighters was a sluggish and unfair game at the best of times, Vendetta uses what novelty it had and makes for a much more polished experience. The pace is a little slower than Final Fight and its ilk, but there’s never any point where you’ll be stuck on the same screen because your hits won’t make contact with your foes. Most opponents also generally die a lot faster, so you’ll spend more time brutalizing foes than you will getting surrounded and wailed on by them. In somewhat of a tradeoff, Vendetta is also a more difficult game, perhaps even more at points than Crime Fighters ever was. Most enemies can take out a third of your health with a single hit, and certain opponents can kill you with a single combo. Bosses are generally easier than the mooks you’ll fight on the way to them, since they tend to telegraph their attacks a little more. 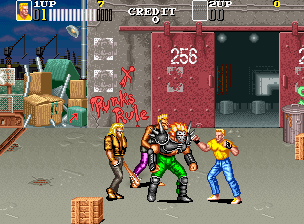 What really makes Vendetta stand out is just how often the environment comes into play. There’s plenty of weapons to be found, including the traditional knives and pipes. You’ll also come across things like pump-action shotguns, as well as things in the enviroment that can be picked up and chucked, from crates to barrels that roll over everything in their path. Weapons are actually surprisingly common, so much so that there aren’t many screens where somebody won’t be wielding one that you can disarm and pick up for yourself.

There are also a few points where you can use certain things in the enviroment to inflict more damage on your foes. The dock on the first stage has enemies sometimes fall off the edge of the pier. While they cling from dear life, this is your chance to pound on them and send them falling into the waters below. Hit the streetlights in the third stage and the bulbs will fall onto whoever’s beneath them. It’s a little touch of extra interaction that really helps sell the “brutal street fight” feel that even Final Fight didn’t always convey. 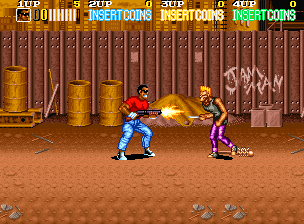 The game also generally does a very good job of keeping itself interesting for its entire runtime. There’s hardly ever a point where it feels like a run is taking too long to finish, and the game introduces new enemies and obstacles at a more than satisfactory pace. The game also has a somewhat unique sense of humor, too, building on the goofier elements of the orignal game. Every so often, your attacks will land solidly into the enemy’s groins, for example, forcing them to react as a faint ‘ding’ comes through the speakers. 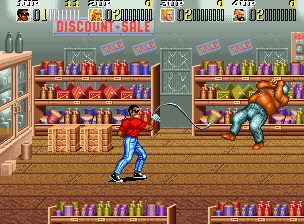 For something that’s both different from your usual Final Fight clone as well as your standard Konami brawler, Vendetta excels at both. Its slower, somewhat more heavy feel might bring a large learning curve if you’re used to the more agile, almost strategic brawling of the games that inspired it. That sort of uniqueness is what makes it worth playing, however, especially if you’re lucky enough to have a full crew with you. For a long time, it didn’t receive any home ports, but eventually popped up as part of Hamster’s Arcade Archives for the PS4 and Switch.

The Japanese version has a couple of differences, outside of the altered title. For one thing, you’re limited to two players, although you can choose your character freely upon starting a new game or continuing. More noteworthy though are the leather daddies that only appear in this edition’s Stage 3 (see mid-bottom screen), which were also in the Japanese version of the first Crime Fighters. As before, these rather unfortunate stereotypes will attempt to grab you and dry hump players to death, and will go as far as to mount them and continue humping their prone forms as they die. It’s more than a little uncomfortable, and their absence isn’t much of a loss at all.