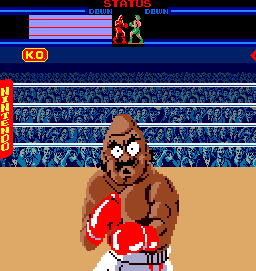 The very first outing of Punch-Out!! had players assume the role of a nameless green-haired boxer. For the game’s arcade machine, Nintendo used two screens stacked on top of each other – one for the actual gameplay and the other for keeping track of stats. Matches lasted for three minutes, with the timer counting down from the sound of the first bell. Your character is portrayed in a green mesh, which is the closest the hardware could get to transparency. There’s also quite a lot of voiceovers, with the announcer calling our your opponent’s name and detailing every single attack you land. (“Body blow! Body blow! etc.) The game also makes use of some unique sound effects, especially the distinct sound when you send someone flying to the mat – this has practically become a trademark of the series.

The game gives you an array of punches to throw, depending on your character’s position (up or down) and which button you press (left button or right button). As you punch your opponents, a KO meter will build (it’s kind of like a super meter for a 2D fighting game). If your attacks are blocked, the meter will drop. When it reaches maximum, you can throw what is called a KO punch (either a Right Hook or an Uppercut). If they connect, they can be devastating to the competition. You shouldn’t throw too many, however, because eventually the computer AI will pick up on this, and dodge them with ease. One thing that is a bit unnoticeable at first: When you are hit by your opponent, you can not throw a punch for about one or two seconds. This makes the game incredible tough, seeing how when you get hit, you’re trying to punch back only to be hit once again.

There are six boxers total to compete against, which are in order: Glass Joe, Piston Hurricane, Bald Bull, Kid Quick, Pizza Pasta, and Mr. Sandman. Each boxer has a different tactic to be brought down, and it’s not always noticeable at first on how to knock them out. You can always tell when they’ll be attacking, as their eyes always turn yellow beforehand. Once you finish defeating everyone and gaining the title, you then have to defend it and go through each opponent again, and this time they really mean business. Particularly annoying in this game is that when you are KO’d by your opponent, you only have one more chance to try and defeat them if you put in another quarter. If you lose again, you will be forced to start back to the beginning.

Not so much of a sequel as it is an upgrade (and barely an upgrade at that), not much has changed since the first installment – which isn’t surprising as this came out the exact same year as the first Punch-Out!!. Matches are still three minutes, and the control scheme is mostly the same. New is only the ability to duck from attacks, which is done by pulling a knob on the control panel. Other changes are all pretty minor. The upper screen has a different set-up, where it gives the top three scores and KO times right on top, instead of just the first top score. The timer has also been changed. Where in the last game it counted down how many seconds you have left to defeat your opponent, here it shows how long you’ve been fighting.

There are five new characters to do battle with, such as fan favorites Bear Hugger and Dragon Chan. This version is definitely harder, as it unleashes all of it’s fury from the very first round (Bear Hugger is a much more formidable foe than Glass Joe could ever be). The boxers this time are Bear Hugger, Dragon Chan, Vodka Drunkenski, Great Tiger, and Super Macho Man – and once again, when you win the title you have to defend it and fight each character again. Other than that, it is pretty much the same deal. If you really want to nitpick about changes, your character’s portrait has him donning a new haircut, which makes him resemble Principal Skinner from The Simpsons.