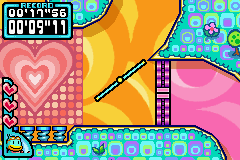 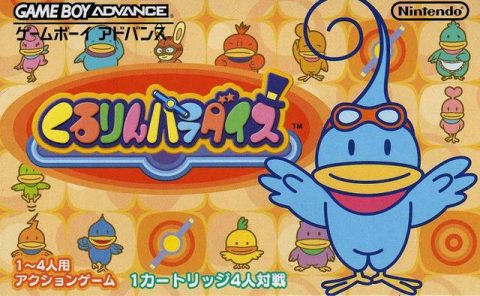 Kururin Paradise greatly expands on the original game without messing with the formula much at all. The only real control difference from its predecessor is that you can speed up the rotation of the Helirin by holding the R button. But there’s plenty more depth, especially in the level design. Although there still aren’t very many stages (34 in the main Adventure mode, 30 more the Challenge mode), they get really hard, really quickly. It’s definitely meant for veterans of the first game, but it’s ultimately a much more satisfying experience. For example, instead of exploring the stages to obtain meaningless color variations, you can now hunt for bonus keys, which will unlock sections of previously played levels and open new areas on the map. 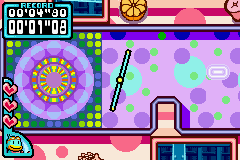 Each section also ends with a “boss” encounter, which is some kind of mini game. One of them is a Balloon Fight rip-off, where you have to control Kururin as he flaps between spiked objects. Another requires that you bounce around a huge playing field and collect stars. Yet another is a multi-player variation of air hockey. Another is a simple race. There are fifteen of these games in total, most of which can played with up to four players. There are also a few of (mostly) useless non-games, which require that you reboot the GBA to play. These include a Love Tester (rank your compatibility with your significant other), among other silly doo-dads. 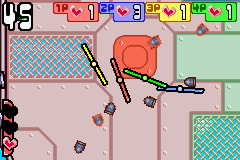 The graphics, too, have improved substantially. The original has adequately colorful visuals, but everything has been given a pastel, cel-shaded gloss, making it look even more like a cartoon come to life. There are even more cutscenes this time – some evil doer has swindled away Kururin’s family – and they’re also pretty amusing. Kururin Paradise was apparently rumored for an American release, but that fell through completely, and the game never left Japan.