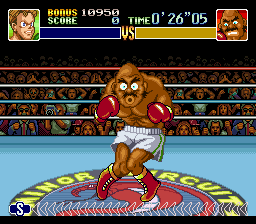 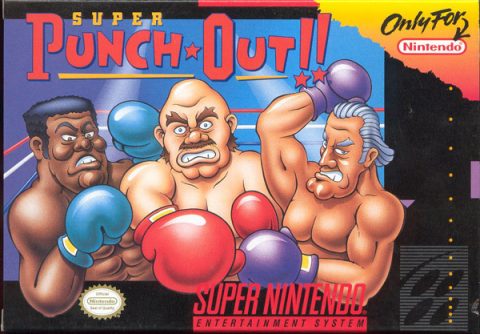 Though different from the arcade game of the same name, the SNES Super Punch-Out!! is much closer to the originals than Mike Tyson’s Punch-Out!!. Gone is the little boxer named Little Mac, who has been replaced by a new nameless blonde haired kid whose mission it is to win the title of the greatest World Video Boxing Association boxer. The perspective is the same as the arcade game, except your character is transparent instead of being a wireframe model. The timer has gone back to the three minute limit with one single round. There are a total of four circuits (Minor, Major, World, and Special), with the Special Circuit only becoming accessible with a record of twelve wins and zero losses. Besides the regular game mode called Championship Mode, this game features a Time Attack Mode that lets you beat your time records, which can be viewed in Records View Mode. This time, the game uses battery-backed memory instead of passwords.

The regular punches have now been tampered with in this game, as each punch has varying speed and power. From fastest to slowest, and weakest to strongest: Left Jab, Right Jab, Left Body Blow, Right Body Blow. The star KO meter has been ditched for the original KO meter, so the more blows you land, the higher your meter goes to finally deliver KO punches (uppercuts, huge body blows, and new rapid punches). New to the series is the power-up system. As time passes, the color of your character’s portrait above the stamina meter changes, signifying the increase of your power. It will go from blue, to green, to yellow, and finally to red – you can also think of it as weak to strongest. When your KO meter is filled, your boxing gloves flash, while normal punches have more speed and KO punches are more powerful. You can actually change the settings of the power-up in the Button Setting Mode to change from Auto (power-up begins when power is at maximum and you throw another punch) to Manual (lets the player choose when to start power-up with a button press whenever your power is at maximum). Knowing the properties of your punches and utilizing them is key to besting the opponents.

The dodging system has been revamped as well, making this version the easiest to defend oneself. In the other games, you had to press the direction you wanted to block an attack with (Up blocking upwards, Down blocking downwards). In Mike Tyson’s Punch-Out!!, you could only block upwards, anyway. Here, pressing up blocks upwards – however not pressing anything allows you block body blows automatically. It really makes the game that much easier, and gives more control about the character instead of being thrown off due to not pressing the correct directional button. You can also dodge left and right as well as duck. 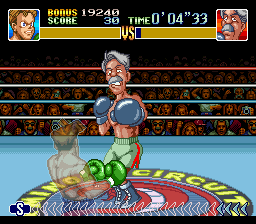 Another much welcome addition is the self-healing. When you knock down the opponent and the referee is counting down, you can press any button as fast as you can to regain lost health in the battle (as usual, the enemies’ punches are always much stronger than your own). You still need to mash buttons to get up after being knocked down. Don’t think that the game is any easier with the added defensive and offensive options, because it’s still quite difficult, especially in the final two circuits. If anything, the result is a much faster-paced game compared to the others.

The game features a diverse group of boxers to challenge. Many of them have been in previous outings, such as Bear Hugger, Piston Hurricane, Bald Bull, Mr. Sandman, Dragon Chan, but there are also a lot of new faces such as Mad Clown, Aran Ryan, Heike Kagero, Masked Muscle and the Bruiser brothers. Much like the last games, each fighter follows a certain pattern. Each of them has a huge arsenal of signature moves, whereas previous games had only around two or three moves that separated them from the other boxers. An example would be Heike Kagero, a Japanese kabuki dancer who floats around the ring with a fast dance, and hits you with his large grey hair. Or Mad Clown, who at one point does black flips to the back of the ring, juggles balls, and then throws them at you – all before jumping forwards and attempting to smack your head and knock you down with a single attack. Or a match up against Hoy Quarlow, a 78-year old martial artist, who literally beats the living tar out of you with his walking stick. Despite the frustration with some of these cheesy attacks, it lends even more to the personality of the series (get knocked down from Super Macho Man and watch him flex the entire time you’re down. It’s ridiculous). Your opponent’s coaches will even yell tips at them, telling them to either attack or take it easy. These should be a sign that they’re about to lay a huge attack on you, so dodge or attack accordingly.

This game was criticized by fans of the NES game for being too different. What people didn’t realize, though, is that this version was closer to the original spirit of the arcade games. If anything, Mike Tyson’s Punch-Out!! is the only game in the series that deviates from the norm.

For a few years, Super Punch Out!! was an American/European exclusive game – it was initially released in 1994, and didn’t come out in Japan until 1998. The game was only sold through the “Nintendo Power” vending system, where you would purchase a blank cartridge, and pay to have various games written on to it. 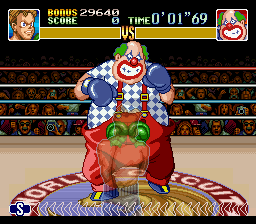 Super Punch Out!! has also made an appearance in the EA boxing game Fight Night Round 2. Since the GameCube version lacks the online modes of the Xbox and PS2 versions, EA gave GameCube owners the ability to play Super Punch-Out!! in the game. It’s actually emulated very well, and is definitely a welcome bonus to an already great boxing game. You can even unlock the fighter from Super Punch-Out!! for the modes in Fight Night Round 2 in all 3D glory. The game has him wearing shorts that say “MAC” on them, implying that the boxer is Little Mac, which is incorrect (again, in Super Punch-Out!! he did not have a name).