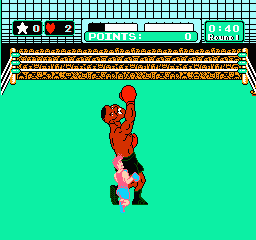 Mike Tyson’s Punch-Out!! is a bit of a departure from the arcade games. Players assume the role of Little Mac, an eighteen-year old New York City hopeful who’s determined to become the greatest boxer. With the help and training of his coach Doc Louis, he will duke it out against several much larger boxers to win the title.

The look and feel of the game differs greatly from the arcade games. First of all, instead of being a wireframe character, Little Mac is just incredibly short. It kind of makes the game even more humorous, seeing how he has to pretty much jump up to punch the opponents in the face. (This was done to accommodate the NES hardware, since it wasn’t quite powerful enough to replicate the arcade game.) Little Mac has the usual four punches and he can dodge left or right, duck, and only block upwards, for the opponents never hit below his face (probably due to his size). Gone is the KO meter, and strength is now regulated by a star counter. As you throw punches at your opponent, you will receive a star at certain points. Once you have obtained one, you can throw a KO punch by hitting the Start button. To get these stars, you have to time a punch just right to get them, like punching the opponent right as he’s about to attack. These punches are valuable and should only be used if there is a huge opening, preferably when the opponent is stunned.

Also new is the fatigue meter, signified by hearts. Little Mac has a set number of punches he can throw before becoming tired. The counter goes down when he either misss, has his attacked blocked, blocks an opponents punch or gets hit. If the counter goes down to zero, he will become purple and unable to attack, leaving only the dodge and block. If you are hit while fatigued, you are still disabled and can not attack. Blocking moves also leaves you fatigued, but once you dodge a move, you can begin attacking again as the fatigue meter is reset. It makes the fights more challenging, but it gets in the way as you try to defeat your opponents and suddenly you can’t attack because you weren’t paying attention to the meter. One minor change from the arcade version – instead of opponents’ eyes turning yellow, their entire bodies will flash when they’re about to attack.

The game’s timer is also different, as this game introduces rounds. Each round is three minutes, but you do not have to defeat your opponent in that specific time. You are now given three rounds, so you actually have a total of nine minutes to KO your opponent. If neither character gets a KO, a decision will be made based on performance. This makes it more realistic than the arcade and SNES versions of the game, where you automatically lose the match when the time is up. In between rounds, coach Doc Louis gives a hint on how to defeat the enemy, while your opponent sits there and says something that is completely stupid and/or hilarious (“Make it quick… I want to retire.” – Glass Joe). Each time a new round begins, you still have whatever stars you had in your star meter, and you and your opponent’s damage is carried over as well. (Although you can “cheat” and hit select between rounds to gain a bit of health.)

The game is divided into circuits, and there’s three fights per circuit. Once you have bested the final opponent in a circuit, you win the title for that and move on to the next. After each title, the game gives a little cinematic of Little Mac running through the streets of New York City in a pink sweatsuit, with Doc Louis following him on a bike, then it gives you a password so you can go back to fighting at any time. The scene with Little Mac and his coach has produced an internet fad that has spawned a song and several flash videos from sites like YTMND and Newgrounds.

A lot of characters return from the arcade games such as Glass Joe, Bald Bull, Great Tiger, and Vodka Drunkenski (renamed Soda Popinski), while new characters include Piston Honda (who is really only a Japanese version of Piston Hurricane), Don Flamenco, and fan favorite King Hippo. The main draw to the game would have to be the inclusion of Mike Tyson. He’s the final match for a good reason, for he is ridiculously fast and powerful. When fighting him for the first time, it’s hard to even last for fifteen seconds.

Mike Tyson’s Punch-Out!! was one of the many NES titles that was featured on the Playchoice 10 arcade machine. The game is exactly the same, except now you are timed on playing the game for 300 seconds for each quarter you put in. The only noticeable change is the ability to put in your initials right at the beginning.

When it came time to re-release the game, the game’s star had lost his title belt. So when it came to resign the contract, Nintendo opted not to renew it (this was before his rape trial, so not related to that). Punch-Out!!‘s new boss became Mr. Dream. Although different in appearance, he has the exact same moves as Mike Tyson, meaning the method of defeating him is exactly the same. It is a shame though, seeing how Mr. Dream is in no way as intimidating as Mike Tyson was. This version can be found as a bonus game in Animal Crossing for the GameCube and was used for all Virtual Console releases, but the actual cart is one of the rarer NES games to find.

Even rarer is the special gold cartridge Nintendo gave away as a prize in a Nintendo Famicom Golf US competition, which was held in June 1987. So this actually predates any of the regular versions, and it was still called just Punch Out!!. The game is mostly the same as Mike Tyson’s Punch-Out!!, except it’s still missing Mike Tyson himself. Once you beat Super Macho Man, the game is won. Nintendo didn’t originally plan for a retail release in Japan, but the high demand made them change their mind. Both Japanese versions use a different color scheme than the Western versions, and have a bit more hilarious Engrish.

Mike Tyson’s Punch Out!! is the only NES game to use the MMC2 chip. (MMCs were memory mapper chips that allowed the system to pull off effects that would otherwise be impossible for the NES.) This allowed for the huge characters seen in the game. The Japanese version uses the MMC4, although it’s not clear why it uses a different chip, because there aren’t any immediately noticeable differences. In fact, the whole game is still in English, even referencing the Nintendo Fun Club newsletter, which didn’t exist in Japan. A few other Japanese games, like Fire Emblem, also use the MMC4 chip.