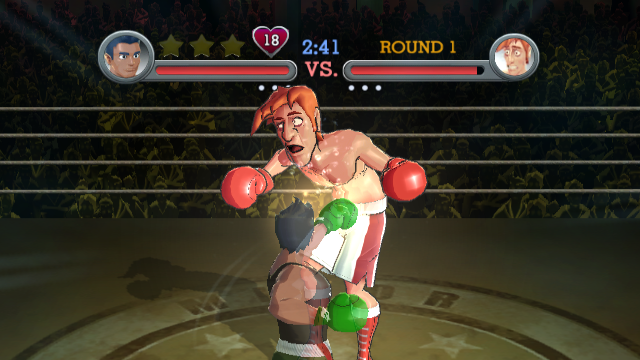 After fifteen years, Nintendo finally decided to revitalize the Punch-Out!! franchise. Given to the Canadian development team Next Level Games after the success of the Super Mario Strikers series, the game isn’t so much a remake as it is a full on upgrade taking elements from each and every Punch-Out!! before, with the most inspiration drawn from the NES game. Yet again players take control of Little Mac, the little boxer who could. With the return of his coach Doc Louis, it is time to set the world on fire again and battle it out in three circuits to take the title of greatest boxer in the world.

The game has the same setup and some mechanics as the NES game: three 3 minute rounds to try and knock out your opponent. You fight every boxer and when you become the champ, you have to defend your title much like before, and defeat ever boxer yet again. The fatigue meter is back with the hearts showing you how many times you can miss / have your attacks blocked before Little Mac has to rest and can’t throw anymore punches. Also making a return is the star counter system, which works similarly as it did in the NES version. However, instead of stacking up to three super moves, it allows you to perform a single super punch of varying strengths. Getting hit also drains all stars instead of just one. It is a bit easier to obtain stars, though. The best defensive maneuver from the SNES version of mashing buttons during downed opponents to regain health also makes a glorious return.

The game has multiple configurations, with the much lauded one of using the nunchuk attachment and holding the input devices as if you are actually boxing. It feels natural and is surprisingly accurate. However, due to the fast paced nature of the game its not entirely useful. For the best reaction time with punches, you’ll end up just holding the Wii remote sideways and playing it like a NES controller. The Wii balance board can also be used, with leaning left and right to dodge and shifting your weight in the back to duck. This unfortunately is also a gimmick and most people’s reaction time in real life is nowhere near the speed of the game, so you will just get hit a lot. 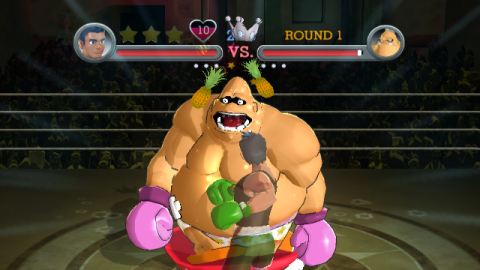 Adding to the nostalgia is the return of the more popular boxers from past Punch-Out!! games. Many boxers make their triumphant return after not being seen since the NES version like King Hippo, Von Kaiser, and Great Tiger. The selection of past boxers is perfect (although the Super Punch-Out!! debutants are mostly missing, with the exception of Aran Ryan), with each one realised in true 3D. While this will make most fans of the series squeal with glee, it’s the infused personalities that really take center stage. Every action and word said (which is spoken in their native tongue!) has been well thought out to make every boxer come to life, like Great Tiger flying into the ring on his magic carpet, or when Bald Bull slides his feet in anger much like a bull before he charges. It makes every character seem over the top and stereotypical, but in turn makes it easy to love all of them even when beating them to a pulp. There’s also lots of great artwork of the opponents getting ready for the fight.

The Wii version also features two new boxers, one being the well-known Nintendo icon Donkey Kong, and the other one is Disco Kid. His appearance in the game is amusing and he fits so well with the rest of the cast that it’s almost as if he could have been from an earlier title. While Disco Kid is great and so many lovable boxers return, it is a little odd and sad that almost all of the characters are from past games. Why couldn’t they have created even more new boxers? 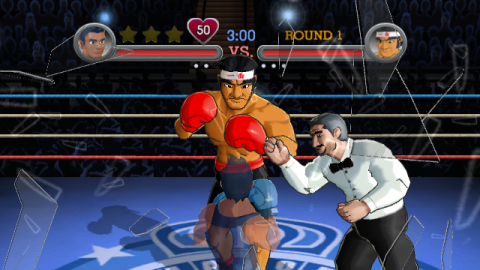 Besides the regular career mode of the usual boxing, there is also an exhibition mode with many challenges that are just absolutely ridiculous. Expert players need only apply. Also added for the first time in the series history is a head-to-head two player mode. Here, you both control two Little Macs in split screen and try to punch the other the most and fill up your meter. Once filled, the winning player becomes Giga Mac and switches to the typical single screen setup. From there, Little Mac must face off against Giga Mac as it turns into a typical Punch-Out!! match. These games were never about multiplayer at all, but this mode certainly made it creative at least. There’s also a practice mode that lets you face a holographic version of each of your foes.

All in all, this is a great reimagening of the classig series. The graphics are obviously fantastic, with huge, cel-shaded characters and incredibly charismatic animation. All of the music themes are remixes of the main theme from Punch-Out!!. The theme during the regular game is played on guitar and it has a cool ’80s rock feel to it, and it changes with each circuit. What’s particularly cool is that each enemy has his own unique arrangement of the theme. 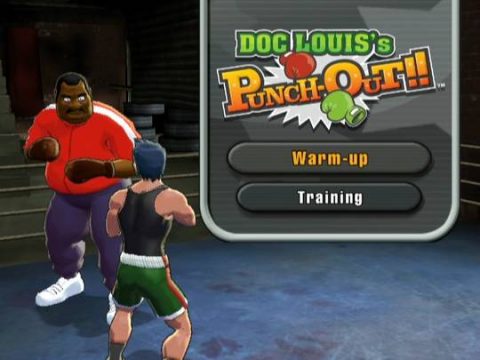 In October 2009, Nintendo released Doc Louis’s Punch-Out!! on WiiWare, as an exclusive reward for Club Nintendo platinum members. Using the Punch-Out!! engine, all that you can do here is fight or spar with Doc Louis himself.