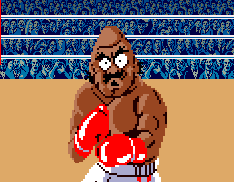 Nintendo’s take on the boxing world is quite interesting. While not the first boxing video game, Punch-Out!! was certainly the first one to become a successful hit. It’s really no surprise either, as the game boasts incredibly tight controls and memorable characters. (Sometimes, however, the excessive use of stereotypes can get borderline offensive. The Italian boxer Pizza Pasta immediately comes to mind.) While the arcade games were relatively popular, it was the NES outing of the series that brought it to the forefront of gaming, with the sponsorship of professional boxer Mike Tyson.

Unlike most boxing games, putting yourself on the offensive is a bad idea. A majority of the time, you’ll need to wait until your opponent strikes, dodge, and then knock them while they’re stunned. Each character usually has a set pattern that can be learned, but you must be able to react quickly against them to truly win. A few of the more colorful boxers have some truly outlandish attacks, some of which border on the supernatural (Indian boxer Great Tiger teleports around the ring) or flat-out illegal (Chinese boxer Dragon Chan can jump kick you), but the game is obviously not meant to be taken seriously. Naturally, you’ll need quick reflexes to succeed, along with some elementary puzzle solving skills.

The whole Punch-Out!! series is the brainchild of Genyo Takeda, who worked on every game, even as a supervisor on the Canadian-developed Wii reboot. Oddly enough, he was also known for the Startropics games. Most of these titles were made for the American audience, as Punch-Out!! fared much better overseas than in Japan. Takeda was also a technical guru, and helped in the creation of many NES mapper chips, as well as the battery backup function used in games like The Legend of Zelda.

The worst boxer in the game, his track record is actually 1-99 KO. He is your first opponent in the arcade, NES, and Wii games. Pathetic by nature, in the ring he barely even throws a punch. Although he will back away from you to taunt you, he will rarely do anything else. If you can’t defeat him, this game is not for you.

Hailing from Havana, Cuba, Piston believes himself to be the greatest at boxing. Notorious for his fancy footwork and his barrage of alternating high and low punches that you have to block, he’s kind of actually a blow hard. Originally appearing in the arcade Punch-Out!!, he’s the only character to receive a complete make over in the Super NES Super Punch-Out!!

The Turkish boxer has been in every Punch-Out!! with the exception of Super Punch-Out!! in the arcades. A fan favorite, his Bull Charge is his best move and ironically his major weakness. Punch him right as he’s charging at you!

The New York boxer is quite easily the dullest character design. He basically has no big moves that separate him from anyone else and his tactics include just being able to react quickly to your punches. It’s pretty clear why he didn’t appear in any other Punch-Out!! game after his first and only appearance.

The unfortunately named Italian doesn’t have a lot going for him. He reacts quickly to your attacks and has a rather good defense, but otherwise is pretty plan. One of the only two boxers in the Punch-Out!! series who will clench.

His boxing style is the most normal, as he just dishes out punches, albeit incredible strong ones. Named for constantly putting his opponents to rest, Mr. Sandman is ill-tempered and will stop at nothing to win once you start gaining the upper hand in the match. Listed as from Philadelphia originally, changed to New York City in the SNES manual, and the Wii version changes it back to Philly.

Weighing in at 440 lbs., this Canadian has one huge advantage: you can’t deliver a body blow. He’ll just taunt you by stick his giant tongue at you. Grew up beating up animals in the forest. Bear Hugger clearly isn’t a member of PETA. He originates from Super Punch Out in the arcades and later shows up in the SNES and Wii games.

Inspired by Bruce Lee and Jackie Chan, Dragon Chan is an ex-kick boxer, and he’s not afraid to use his kicks in the boxing ring, especially when jumping off from the ropes. He even has a healing ability. Once you get to know his style, you’ll realize that he is all about offense, with a really weak defense.

A Russian who loves to box just as much as he loves to drink. While in the arcade games he is Vodka Drunkenski, on consoles his name was changed to Soda Popinski. The name change makes his conversations absolutely insane: He makes references to getting drunk but is supposedly addicted to soda?

This native of India has the ability to teleport in the NES game. He can also create mirror doubles in the Wii version. Effectively blocking his barrage punches during his teleporting will make him dizzy, giving you a chance to give a barrage of your own. In the arcade Super Punch-Out!!, he’s more of a Piston Hurricane clone.

The world champ in most Punch-Out!! games, the Los Angeles boxer is a workout nut job. How so? He even keeps working out while he’s boxing you with his exercise programs! Seems more interested in flexing his muscles then fighting, which produces disturbing sounds. His super spin punch is one of the deadliest moves in the series.

This German boxing machine appears in the NES and Wii version as the second weakest opponent after Glass Joe. Has an unfortunate habit of shaking his head before he punches, making it laughably easy to avoid every single punch he throws.

He’s an edit of Piston Hurricane for the NES version. Very patriotic of his country (Japan) as he always proudly proclaims, “I’ll give you a KO from Tokyo!” You face him twice in you journey to become champ, with the second outing being much more difficult. Renamed Piston Hondo in the Wii version, possibly to avoid infringement.

This Spaniard is a flamboyant boxer who believes he is a beautiful fighter. The first fight with him is rather pathetic and he’s easily read, but the rematch is much more intense. Has a thing for hair, especially Referee Mario’s. In the Wii version he’s shown wearing a toupee which you can knock off to make him angry.

The strangest boxer you will go up against, King Hippo’s defense is impenetrable until he opens his mouth. Clock him there and a band-aid appears. Punch, rinse, repeat. The only character which you can never get a TKO from. When he is knocked down the first time, the fight is over due to his massive weight.

The only real life boxer in the entire series, Mike Tyson is the final opponent in your way of winning the title belt in Mike Tyson’s Punch-Out!! Instead of being ranked with an actual title in the game, he is given the rank “Dynamite Kid.” One uppercut connecting means an instant knockdown, no matter what.

Mike Tyson’s replacement for the later re-release of Punch-Out!! for the NES. He kinda looks like a dork, really – not exactly the fierce-looking opponent Tyson was. His move set is exactly the same, though, so defeating him is the same strategy as for Iron Mike.

The first opponent in the SNES Super Punch-Out!!, he is pretty much exactly like Glass Joe. Heck, they have some of the same stats (Both from Paris, France; Weight: 110 lbs. And both have a record of 1-99 KO). It just so happens that his only win was against Glass Joe. That’s not really an accomplishment.

Crowned the Jive King of Kingston, Jamaica, Bob Charlie is really agile and nimble around the boxing ring. He’ll shuck ‘n’ jive to dodge your attacks and comes in with relatively weak punches. Bob Charlie has a tendency to go to the back of the ring to taunt you and then either come after you with an uppercut or taunt you some more with a confused look.

The Mexican wrestler is the crown prince of the cheap shot for a reason. Not only will he head butt you from time to time, but he also tries to spit in your eyes, disorienting you and making you unable to attack…

The unconventionally spelled irate Irishman could be considered a stronger Piston Hurricane clone. His alternating high and low punches are much more intense. Notable for being one out of two Punch-Out!! boxers who try to clinch to regain health. He’s also the only new character from Super Punch-Out!! to show up in the Wii version.

This Japanese kabuki student quite literally dances around you in the ring. He moves with an ultra-fast dance that moves him left and right. Once he stops, he usually starts to throw just as quick punches. At times, he also attacks with his long silver hair.

With a similar build as Bear Hugger, the Italian clown doesn’t mess around. Undamaged by body blows, you have to constantly attack his face. Another dirty fighter, he backflips and juggles balls, only to hurl them towards you and then slamming your head afterwards. Once his coach yells “Show time!” Mad Clown becomes even more aggressive and pulls out all the stops.

The large V on the Prince’s sweater stands for “Victory.” So if you couldn’t guess right away from his name alone, the sweater should tell you that he’s a real cocky bastard. The Londoner hates having his face touched, so you should take advantage of that. When you pop him in the mug, he goes absolutely ballistic.

The most unorthodox boxer in the series, Hoy Quarlow is an incredible quick and agile man for being a 100 pound seventy-eight year old. The Chinese martial artist will attack you with backhands, kicks, and the occasional beating with his cane. Did I say occasional? Actually, he attacks with that stick pretty much the entire time…

One of the Bruiser brothers, Rick has won every single boxing match he’s been in with the exception of one (against his brother). His Earthquaker move shakes the entire ring and leaves you frozen in place, only for him to uppercut you with an instant knockdown.

The absolute champion in SNES Super Punch-Out!!, he’s never lost a match. The ground shakes when he walks. Has the annoying ability to be able to throw a punch and deal damage even if you’re blocking the attacks. Your best bet is to be offensive against him the entire time.

The ’70s-infused disco lover from Brooklyn is sort of a new boxer for the Wii version – he might actually just be a revamped version of Kid Quick. He uses his dancing skills to trick you from where he is going to attack. He is the only Punch-Out!! character created from Canadian development team Next Level Games.

Nintendo’s famous ape dons the boxing gloves in the Wii version. He is a hidden opponent that only starts to show off in the “Last Stand” mode, where you’re challenged by ongoing random opponents after beating the career mode.

Doc Louis isn’t an opponent in the regular series, but Little Mac’s faithful trainer in the NES and Wii versions. It’s possible to spar with him in Doc Louis’s Punch-Out!!, an exclusive little WiiWare game only for Club Nintendo platinum members.