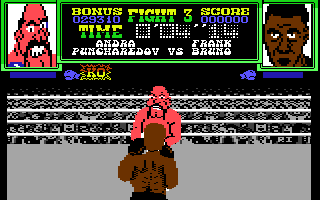 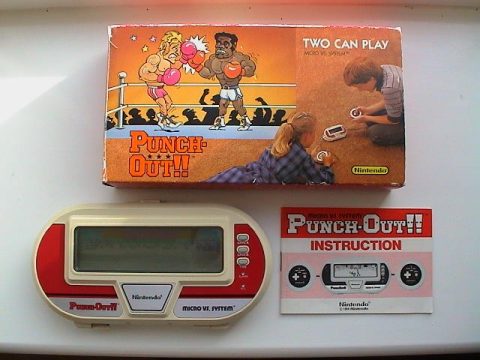 A part of Nintendo’s Micro Vs. series of 2-player LCD handhelds, Boxing was released a few months after Punch-Out!!hit the arcades. After the success of the NES game, Nintendo of America re-released the oldie as Punch-Out!! to tie in with the popular title. The game shows a side view of the action, and the players can direct high or low punches at each other. Depleting the opponent’s health bar makes them back away a step, and knocking them down in the corner wins the match. It has nothing to do with any other game of the series, as it’s only similarity is that they’re both about boxing. Nintendo included this game in their Game & Watch Gallery 4 for the Game Boy Advance, where it again appears as just Boxing. The remi mode has Luigi fight against a Wiggler, a Boo, and finally against Waluigi. 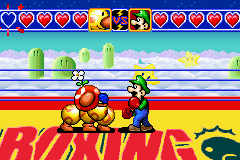 As the title suggest, this arcade title is a very different game from the Punch-Out!! series. However, it was developed by the same team behind Punch-Out!! and there are many similarities, namely the same two screen setup and the graphics. Arm Wrestling has the same graphic engine as the Punch-Out!! arcade games, and features bright vibrant colors and an assortment of colorful enemies to take down, ranging from a Texan, a sumo wrestler, a monkey robot controlled by a little girl, and Frankenstein’s monster’s son named Frank Jr. The one arm wrestler named Mask X is actually Bald Bull in a mask, and seems to have inspired the character Masked Muscle in the SNES Super Punch-Out!! In this game, the characters make a face and strange noises, while you frantically wiggle the arcade stick and keep pressing the button to bring his/her arm down. The game isn’t nearly as fun and was never as popular as the Punch-Out!! games were. 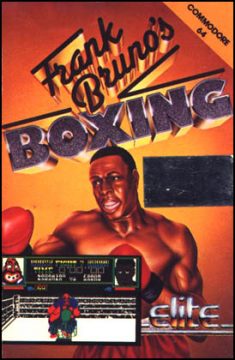 Oh… man! A year after the original arcade Punch-Out!! games, Elite published a computer game that is such a monstrously huge rip-off, it’s hilarious. In addition to getting a famous boxer to endorse it, several characters are ripped straight from the arcade Punch-Out!! games, including Bear Hugger (renamed Canadian Crusher), Dragon Chan (Fling Long Chop) and Vodka Drunkenski (Andra Puncharedov). And somehow, they managed to come up with even more offensive characters – Raviolo Mafiosi and Frenchie France are relatively tame, but Antipodean Andy is the worst kind of blackface stereotype. This kind of ripping off wasn’t too uncommon in the European computer gaming scene of the 1980s – see the Super Mario Bros. clone The Great Giana Sisters.

One of the villains in the cartoon and comic book series Captain N was King Hippo from Mike Tyson’s Punch-Out!!Voiced by Gary Chalk, King Hippo came from Punchland and served under the evil Mother Brain from Metroid, along with Eggplant Wizard. Both were insanely stupid and idiotic, and served as typical comic relief characters. In a strange artist decision, King Hippo’s skin is blue. The first issue of the Captain N comics also showed Little Mac in the opening panel. He never appeared in any of the actual stories, but the Nintendo Comics System ran three brief standalone Punch-Out!! stories.

In WarioWare, Inc.: Mega MicroGame$ for the Game Boy Advance and WarioWare, Inc.: Mega Party Games for the GameCube, Jimmy’s boss stage is called “Punch Out.” Jimmy’s description is, “Fancy feet & sweet moves! KO that guy, baby! If he’s got flash in effect, it means he’s comin’ at you!” Basically, you have dodge from the opponents punch when he’s flashing (dodging either left or right) and then landing him one right in the kisser. 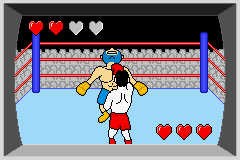 Wario Ware Touched! for the NDS has a micro game called “Button Masher” where you have to press the A button on a NES controller to do one of three things: One of them is to hit a boxer as he stops lowering his arms, clearly inspired by Punch-Out!!

Super Smash Brothers Brawl first showed hat Little Mac could be in 3D. While not being an actual fighter in the game, he can be summoned from the assist trophy item which is basically a Pokeball with various Nintendo characters in it. Little Mac is literally half the size of most of the fighters and when he is in play, he will run towards the closest opponent and either send a barrage of punches at him or do a star uppercut. He even has the NES sound effects every time he punches! 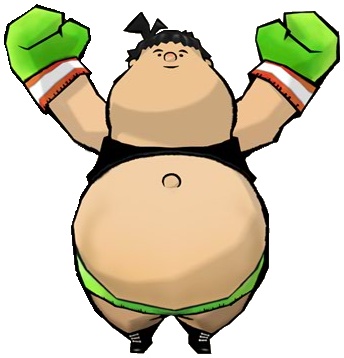 Little Mac would later also show up in the Skip Ltd. game Captain Rainbow for the Wii, alongside other obscure Nintendo characters like Takamaru from Nazo no Murasamejou and Lip from Panel de Pon. Little Mac has actually became overweight and it is up to Captain Rainbow to help train Little Mac to lose the weight and once again fight in the boxing ring. This game never came out in America.