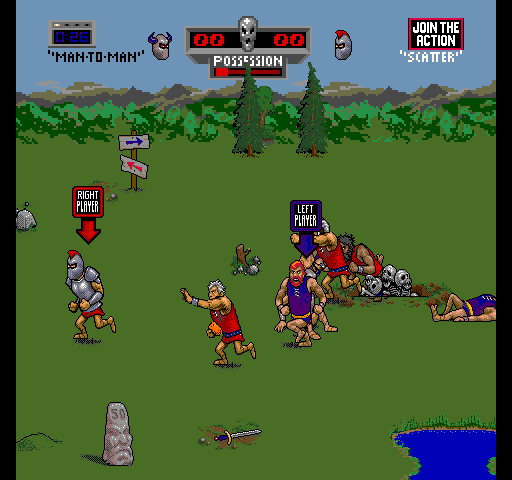 Ah, here we go. Arch Rivals might have not aged quite as well as Midway’s other sports games, but Pigskin ends up making so many changes from the original sport it’s based on that it might as well be a different game entirely. The setting’s been changed around this time, too. Instead of taking place in the ’80s, the game’s set in the Dark Age, with swords, dungeons, and a few trolls for good measure. The game’s tagline is “Ancient Arch Rivals on a Rampage,” though, so it basically is the spiritual sequel to Arch Rivals.

This time around, the basic rules are borrowed from American Football. Just like Arch Rivals, though, Midway has cut it down so finely that you can’t even really call it football anymore, which might explain the medieval setting and the fact the game doesn’t actually call itself a football game. You’ve got no plays to worry about, no statistics, no yards, and as you’d expect for the follow-up to Arch Rivals, absolutely no fouls. All you have to do is have one of your guys bring the ball to the opponent’s goal, and you’re free to do that in any way you want. When you start the game, you get the choice of playing “Regular” or “Pro” Pigskin. The main difference, besides how well the enemy team’s AI plays, is how many players you have on each side. On Regular, you get five, and on Pro Pigskin, you get six players on each side. 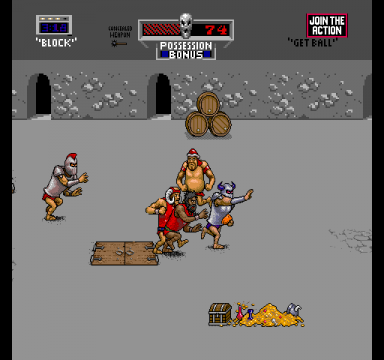 Much like Arch Rivals, you only directly control your team captain, who gets a fancy helmet to differentiate himself from the rest of your team. This time around, you’ve got three buttons to deal with. One button punches in the direction you’re facing. The Pass button lets you throw the ball to another player, and you can hold down the button to change your throw. You also get a new “Strategy” button, which changes the basic strategy your AI teammates will use. Another change from Arch Rivals is that every time you press the punch button, your teammates will also punch, which is useful if one of them is chasing down somebody who’s got the ball. There’s also a new Possession mechanic, where for every five seconds a player manages to hold onto the ball without letting go of it, their team will earn an extra bonus point. If you’re good enough at playing keepaway, this can earn you a few extra points before you go for the touchdown.

And of course, you’re free to punch, tackle, and abuse the other players as much as you want without fear of penalty. You can also tackle the ball carrier, in which case other players can join the brawl. Having more of your players in the tackle gives you a higher chance of winning it, which means you’ll either gain or retain possession of the ball. There are also weapons like maces, torches, swords and nooses lying around the field which you can pick up. You can hold as many weapons as you can pick up, although you’ll only keep one if you’re holding one after a touchdown. One weapon is used up whenever you get into a tackle, and not only will they increase your chances of winning a tackle, but a weapon will actually kill any non-captain player. Don’t worry, though, because any slain players will be instantly replaced the next time anybody scores a touchdown.

Weapons can help to even the odds if the other team is thrashing you, but there are a few other things that can help out a sucky team. If a team starts to fall behind, they hire a mercenary that’ll stab at any opponents who gets too close, knocking them over. If they keep doing poorly after that, they’ll get a troll added to their team, giving the other team one extra player to deal with. Trolls are better than the standard human members of your team, being much more aggressive, along with being invulnerable to weapons. There can be two trolls on the field per game, either with one on each team, or if you happen to suck really, really badly, two trolls on one team. As a last measure, you have the option of activating the “Troll Bowl”. This will turn the losing team entirely into trolls, with the caveat that the winning player has to hit a button to agree to the challenge. 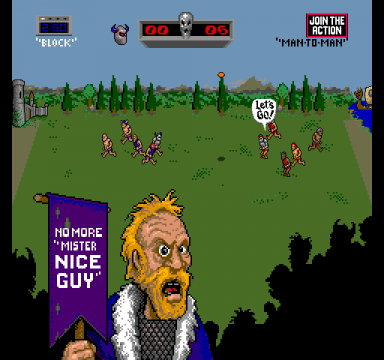 You also have to deal with things cluttering the field, like trees, rocks, and mud puddles. If you walk over these, you’ll trip and fumble the ball, leaving it open for somebody else to grab. You’ll often have times when five or six people slam themselves into a tree over and over, which is really funny to watch, if a little annoying with time. After the second quarter, you move from a field to a dungeon, where trap doors on the floor will periodically open and close. It’s pretty easy to fall in, if you’re not careful, but if you’re good, you can lead somebody to chase after you over one to get him off your back for a few seconds.

Since you can have a maximum of fourteen players on the field at once as opposed to just four, gameplay tends to get a lot more chaotic. It’s a pretty fast game, too, with possession of the ball usually hopping from one player to the other so quickly that it isn’t always easy to tell what’s going on. It’s a lot more fun to play than Arch Rivals ever was, mostly because it feels like actually finishing a full game doesn’t take nearly as long. Of course, you shouldn’t be expecting a gameplay experience that’s even remotely balanced, with all the mechanics to help somebody who’s sucking earn a comeback. Just like Arch Rivals, this isn’t a game you play for a realistic football experience. This is a game where you bash somebody’s face in with a mace so you can take the ball from him. It’s such an easy game to pick and play, though, that pretty much everybody will start out at a more or less equal level.

The presentation has been minorly improved since Arch Rivals, and while it doesn’t look fantastic, it doesn’t look quite as dated as that game did. Instead of being stuck in the same basketball court surrounded by void for the entire game, you’ve got two different fields to play on. The field has an actual sky, while the dungeon has things like tables and overturned barrels of ale. The actual players are drawn in the same cartoony style, although they aren’t quite as big on screen – which isn’t really a bad thing, since that means that more players can fit on the screen at once. Using weapons on the other players is particularly satisfying, especially since the end result tends to leave the victim decapitated, having a mace crammed into their face, or set on fire, before fading into a skeleton. It’s more played for slapstick than, say, Mortal Kombat, but it’s still pretty awesome. The sound’s also been improved, with a unique track for each field that doesn’t grate on one’s nerves as badly as the song from Arch Rivals did. The song for the field is a cheerful, medieval-esque sounding tune, while the one for the dungeon is a little more ominous. The voice quality’s been improved, too, and players yell out things like “Pass it!” and “Let’s kick some butt!” fairly clearly.

Sadly, Pigskin was more or less forgotten after its original release. While Arch Rivals got a short revival on Midway’s Arcade Treasures collection, Pigskin only got one port for the Genesis. Oddly enough, the game’s title was changed from Pigskin 621 AD to Jerry Glanville’s Pigskin Footbrawl. The weird thing is that Jerry Glanville is very much an actual person, who very much played actual football. He has absolutely nothing to do with this game, except for his face showing up on the title screen. And this is very much isn’t real football, so what’s he doing here? The port itself isn’t that bad, even though it plays a little slower than the arcade version. On the bright side, you do get some extra options, including how many players you want on each team.

Overall, the Bally-Midway sports games, while they probably didn’t age quite as well as the Jam and Blitz series, are definitely worth playing if you’ve only had a passing interest in sports. You can skip over Arch Rivals without missing a whole lot, but Pigskin is probably one of the best arcade football games you’ll ever play, Especially if you’ve never played actual football. 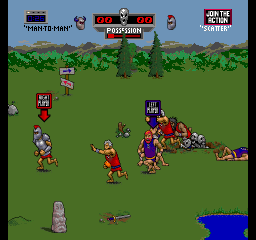