Nintendo is well-regarded as an innovator within the industry. Almost every franchise they made has prompted plenty of imitators. Occasionally, however, the company creates something derivative of another’s work. But only rarely would the results lack their Disney-grade charm (like the early Radar Scope), so even titles like Devil World can break away from their roots enough to shine on their own.

Williams’ Joust was released in 1982 with the simple but challenging goal of jousting waves of enemies while riding upon an avian steed. The mechanic was easy to grasp: whoever lances the higher is the victor. The key was in the execution, as the sole button controlled the flapping of your ostrich mount, requiring to cope with the hover physics to survive attacks. In many ways, Nintendo’s variant of this game, Balloon Fight, performs almost exactly like its earlier Western counterpart, only with a more cartoonish twist on the matter.

As a balloon fighter, you have nothing to ride on. It’s just you wearing a helmet and strapping two balloons on your back to float. Without a bird under you wing, you simply flap your arms to gain lift. Your fellow fighters only have one solo balloon keeping them aloft, but they wear menacing woodpecker masks with sharp beaks ready to pop your sole means of flight. Each balloon serves as a larger, more easily recognizable weak point to strike from above. Your double balloon harness gives you two strikes before your fall, but movement gets more difficult when you lose the first, and the you only recover your balloons after defeat or through a bonus game. 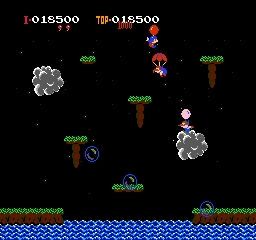 Much like Joust, the game takes place in an enclosed arena with plenty of open air to dogfight your foes. Both buttons function to flap and fly while you move around in the air with the joystick or pad, with the arena wrapping around at the left and right. Inertia plays a major role, as you need to build up lift and account for your momentum as you try to change altitude and direction. You bounce off when colliding with floating mounds of solid ground or your opponents’ bodies, which can send you hurdling into danger if you’re unlucky. The stage layout changes after every round (12 unique sets on the NES before looping) to make for a suitable change of pace to the static repeating arena in Joust. After completing three stages, you get a breather in form of a bonus round where you try to collect 20 balloons that drift from four pipes for added points. Two players can play at once, but they collide with each other, so without proper care “friendly fire” can make this more difficult than the single player mode.

The normal balloon-flying opponents come in three palette-swapped forms, but unlike Joust they don’t turn into bonus point-garnering eggs to collect once bested. Instead, they float down via parachutes and can be finished off for extra points after they reach solid ground. While downed enemies are not a threat for the time, leaving them to their devices gives them ample time to inflate a fresh balloon and rejoin the battle. As a fair gesture, each stage starts with the beaked opponents on the ground inflating their balloons, making them sitting ducks for the speedy player to even the odds. Piling on the threat is a giant fish that lurks in the water at the bottom, ready to gobble up any combatant that flies by close enough. 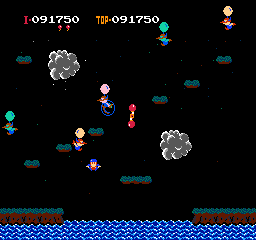 In contrast to Joust, further variables come into play from two added hazards: Sparks bolt from the clouds in the background if you take too long to clear the stage, and flippers launch anyone who flies into them out of control. There are no powerups whatsoever, but bubbles float from the bottom of the screen periodically for added points per pop. 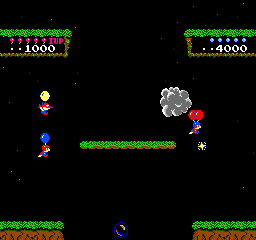 The first release of Balloon Fight was on the dual-screen arcade Vs. System late 1984. While visually similar to the more recognized NES version, there are several differences that make things more difficult. For one, the stage is more than twice as tall vertically, leading to vertical scrolling and the chance for blind hits from foes that are buzzing around off-camera. Enemies are more aggressive and simpler in their AI as they only seek to pop your balloons and don’t try to evade. Their parachutes drop later than on the NES, making them fall faster out of immediate harm’s way. The giant fish and sparks are quicker to appear, too. A few added PSG diddys are played for more extended periods, but the game still is rather silent, aside from constant bleeping of the enemies’ flapping. The largest issue is the stiffness your flight controls, further stacking the odds against you. 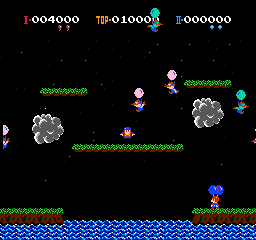 The home port was published shortly after the Vs. edition hit arcades. This was developed in part by HAL Labs, and programming the NES version was one of the late Satoru Iwata’s earliest cooperations with Nintendo. With the playing field limited to the size of the screen, there aren’t any potential blind spots to contend with. It also has more precise controls compared to Vs. Balloon Fight, thanks to a very simple programming change. As Iwata explained, the calculations for player movement is moved a decimal point and based on the tenths rather than the arcade’s interger-rounded computation, leading to a far smoother play experience. The NES port also puts the two buttons to better use, with the A button serving as the standard flap-per-press and the B button changed to a continually flapping motion. This leads to more strategy and less thumb wear, as you can switch between quick lift and delicate floating with little strain.

Another programming trick makes for smarter foes that like to play keep-away, strike from behind, and make use of the screen wraparound, rather than swarm you in a group. The fish acts more intelligently too, following your movement rather than being just a startling random snapping set of jaws. 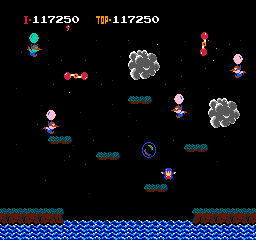 Added to the package on NES is a Balloon Trip mode, where a single balloon fighter flies over an endless fish-ladden sea, with the skies packed with a gauntlet of sparks. There are bonus balloons to collect for score and a catchy Hip Tanaka music tune to groove to. Collecting enough balloons in a row upgrades the color to a larger point amount. Periodically appearing floating bubbles stop the right-to-left scrolling for a brief moment for some welcome relief.

As the familiar variant of the game, the NES port is also the easiest to play in later iterations, and even available as one of the playable NES titles in Animal Crossing. Balloon Fight was also the first Virtual Console release on the Wii U with the 30 cent anniversary price, with an announcement coming directly from Iwata with a mention of his personal involvement. One important significance of the NES version is the hidden legacy of its code: Iwata’s floating physics would later be retooled for the swimming movements in Super Mario Bros.

Months after being released on the NES, Hudson chose Balloon Fight as the handful of Nintendo titles to convert onto Japanese home computers. These PC-88 and X1 ports are nearly identical to the NES version, save for some technical compromises. The sprites a more flickery and the scrolling for the Balloon Trip mode chugs as well, but they are okay conversions – certainly more playable than the overly ambitious Super Mario Bros. Special. Oddly, a downloadable port was made available for Sharp’s Zaurus PDA, being the first portable means of playing the original Balloon Fight prior to flashing it onto the Game Boy Advance via GameCube link cable with Animal Crossing or though e-Reader cards. 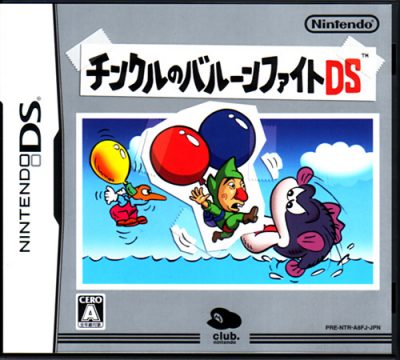 In 2007, a special revamped port of the game was given away as a reward exclusively on the Japanese Club Nintendo program. Tingle’s Balloon Fight DS starred the bizarre Tingle from later The Legend of Zelda installments as the balloon fighter, thanks to the self-declared fairy’s perchance to float on a balloon himself. While it’s based heavily on the NES version, the port uses the DS’s dual screens to expand the playing field much like the arcade original. 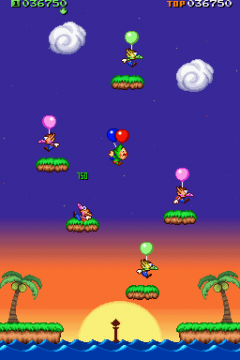 The visuals are a step up with more variety in the background shifting from day to dusk to night, and rupees are tied to the balloons Tingle collects. The DS game also offers the original NES score along with new rearrangements, up to 4-player Download Play co-op, and a gallery of Tingle art to unlock from various achievements. The movement feels gentler with better auto lift, making for a breezier experience for veterans and newcomers alike. While it never saw retail or print whatsoever outside of Japan, the game is fairly common on the secondhand market. 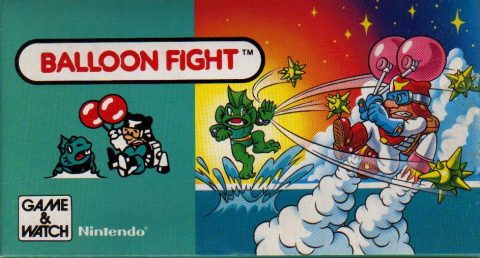 The Game & Watch version of Balloon Fight is an odd bird, released late into the line of Nintendo’s LCD standalone games. You control the sky patrol officer Balloon Man on a quest to recapture the finned and fishy sky pirate Oiram Repus (read it backwards), who broke out of prison. The sneaky flying fishman tore the map leading to his whereabouts and tied the scraps onto balloons to keep his pursuiter busy. 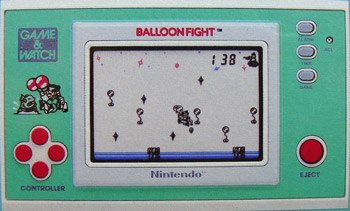 The game plays like the Balloon Trip mode on the NES, using the D-pad and button to jettison. You collect the scattered pieces of the map tethered to the balloons, all while avoiding the occasional spark. Collecting these map pieces is required to proceed to the next stage, where a warp panel can send you to a bonus phase for points for a limited time. After every eigth stage, Oiram rears his ugly head and tosses a slew of sparks for you to avoid. Success nabs the pirate and the game begins again.

It’s a servicable take on the Trip mode considering the limitations of the technology. Nintendo released the LCD game originally as part of the see-through screen Crystal line before furbishing new models under the New Wide Screen line, which are more plentiful to find second-hand. Nevertheless, Balloon Fight is a rare title in the lineup and was never revisited in any of the Game & Watch Gallery titles. It’s only represented with a tiny unlockable museum image in the third game. 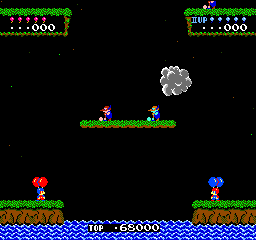 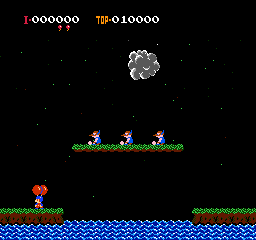 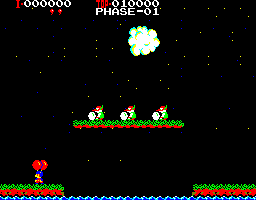 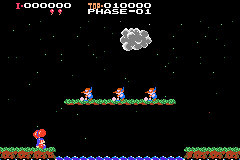 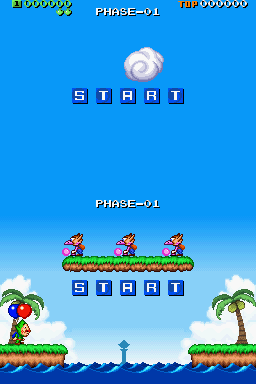 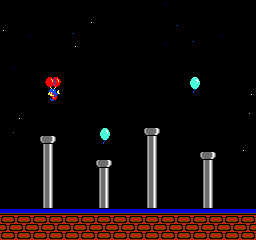 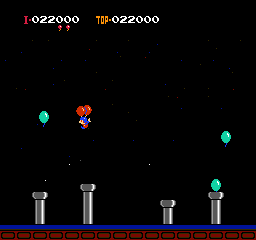 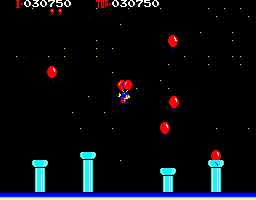 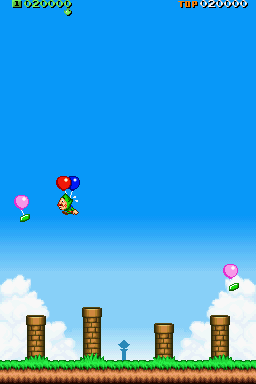 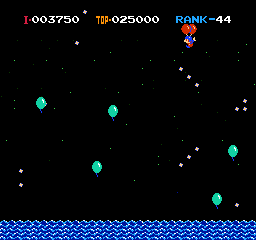 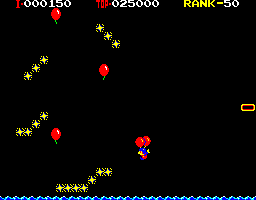 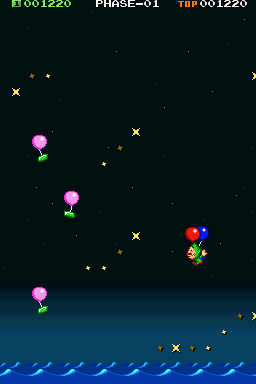