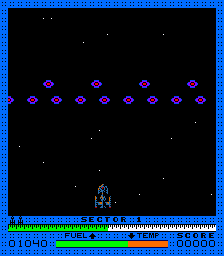 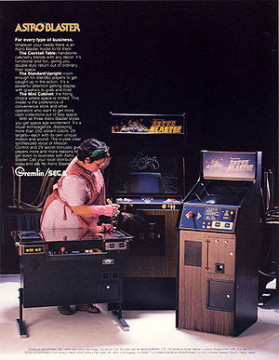 Shoot-em-ups are at the ground layer of the development and evolution of video games. Before home gaming really took off with the Atari 2600, games were most appreciated in public settings via coin-operated cabinets. To be sure, home gaming technically preceded arcade gaming with the commercial release of the Magnavox Odyssey, but it didn’t officially reach stores until 1972, and by then, the first ever arcade game, Computer Space (technically an arcade port of Spacewar! which got its start on radar technology), was already commercialized in 1971. Computer Space itself is an early example of a shoot-em-up, but the real face of shoot-em-ups didn’t materialize until Taito brought us Space Invaders in 1978. SI was simple, fun, and for the time, relatively fast and furious. It’s major popularity led to a considerable legion of “follow-the-leaders” which emulated its single-screen vertical shooting style, though not many of these games were actively bad despite how derivative they were. One such SI-clone, Galaga, rose up to become just as famed and widespread as its parent, perhaps arguably more so. Though for every Galaga, you had about six to ten other games of a similar mold that didn’t quite make the cut. They were still games worth playing to see what they did differently from the king of the hill, with Sega/Gremlin’s Astro Blaster standing out as a fairly notable example of how to do a single-screen space shooter. 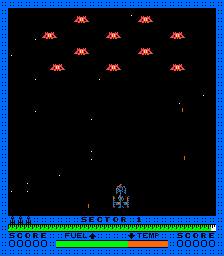 Astro Blaster is a very no-frills game wherein the goal is to rid the screen of alien invaders by blasting apart their bizarre machines. Enemies come in many different designs, all of which are decidedly extraterrestrial; some look like diamonds, others resemble nuclear atoms, and still others just look like glowing balls of light. They start out easy enough to hit but fly around in exceedingly erratic patterns while raining shots down on you in kind. Some of them are even bold enough to fly down and crash into you, and it only gets harder with each new wave. Your main gun is sufficient to toast the baddies, though you must not fire too rapidly. Your phasers actually have a temperature gauge that, if maxed out, keeps you from firing for about ten seconds or so. You also have an alternate “weapon” in the form of a warp drive which, when used, severely slows down all enemies and makes it much easier to hit them. The warp lasts for ten seconds and is ridiculously helpful, but you can only use it once per life or after each stage (known as “sectors”) are cleared.

You’ll need to trigger the warp during parts where the enemies are nigh-impossible to hit, or else you’ll lose all your fuel. There is indeed a fuel gauge for you to mind, serving as your timer and preventing you from dilly-dallying in any given wave. If you run out, that’s not just the end of your life, that’s the end of the entire bloody game right there. Regardless of how many remaining lives you have, the game is completely blown when your fuel depletes, so you’ve got to try and hold out the best you can. After every four-or-so waves, you come to the end of the sector and you actually get to dock with your mother ship in order to replenish fuel. The game continues like this until you run out of lives or fuel, just like all other old-school shmups where the goal is just to garner as high a score as possible. 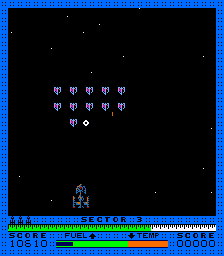 There’s not really too much to say about Astro Blaster, but the simplest games are sometimes the most fun. Its graphics are effective enough, not looking too different from other Space Invaders-type games except for the entire action being framed in some sort of video screen that looks like technology from the USS Enterprise. The sound design is full of neat low-tone bass rumbles and procedurally generated droning hums, but the cherry on top is this robotic voice that you hear on the attract screen and throughout your fights. It warns you when your fuel drops low, how long you’ve got left on your warp, and how many lives you have left, but the voice doesn’t pop up too much so as to be annoying. Astro Blaster isn’t too much unlike the other Galaga-type games of the day, but it plays a bit faster and bites a bit harder than the competition. You don’t always have to be original to make a good game, you just have to take a basic concept and make it your own. Sega would go on to be behind far more innovative and outlandish games in the future, but Astro Blaster makes a good benchmark for their humble beginnings.

Astro Blaster never officially received a home port, but there was a shooter named Megamania for the Atari 2600 and 5200 which bore remarkable similarities to Astro Blaster. One of Activision’s many hits, Megamania may as well have been a direct port or a sequel, with its enemy patterns and ship design bearing considerable parity. You even have to worry about an energy gauge running out if you take too long! It’s a somewhat easier game than its parent, as the enemy patterns are generally easier to identify and you can fire limitless shots without having to worry about a cooldown gauge. While not exactly a direct port of Astro Blaster, the similarities Megamania bears are close enough, and it is also a game very worth playing. 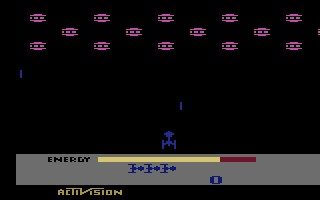