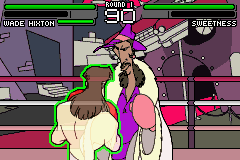 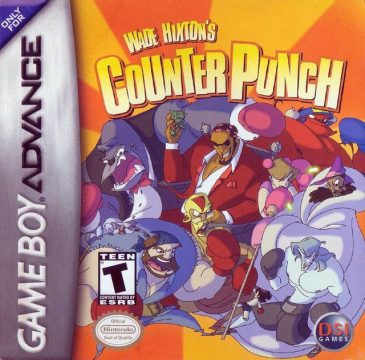 Developed by Inferno Games, Wade Hixton’s Counter Punch is an obvious tribute to the Punch-Out!! series in terms of gameplay (especially compared to the SNES game). It’s pretty much the same setup – during fights, you have a variety of punches ranging from left and right, up and down. You’ve got an uppercut, a block and the ability to dodge left and right. Besides your regular health meter, there’s a power meter on the bottom, which grows from each punch you connect, and below that is a fatigue meter. Much like Mike Tyson’s Punch-Out!!, you must keep watch of this meter so you don’t over exert yourself and be unable to attack. Also like Mike Tyson’s Punch-Out!! is the inclusion of rounds instead of just three minutes of fighting. Each match earns you some cash, which can be used to purchase extra moves.

Wade Hixton’s differences to Punch-Out!! outweigh the similarities, though. For starters, there is a story mode, albeit a very weird one. Wade Hixton’s car breaks down in a small, podunk town. While your beloved car is being worked on, you stay at O’Reilly’s Pub to wait and wet your whistle. Trouble starts immediately as you take the seat of Rocco McScrub, and he challenges you to a boxing match. The whole story is exceeding bizarre, but it oozes goofy charm. The rest of the characters are an amusing bunch, including a pimp named Sweetness, a witch doctor named Jobu, a demon straight from hell named Gus Incubus, and even a gorilla wearing a tuxedo. And in true video game fashion, there’s even an evil Wade Hixton doppelganger to fight. 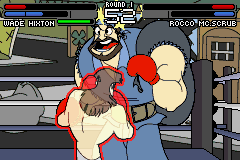 The graphics in this game are incredible, and the talented artists really have to be commended. Sure, each attack has probably only three or four frames of animation, but the huge characters look fantastic. The game has a delightful cartoonish look that fits the game world nicely. Each opponent is hilarious and and their attacks sometimes become more over the top than even Punch-Out!!‘s – Rocco, for instance, sics his pet raccoon on you. There are plenty of other cool touches, like the trailer trash card girls in between each round.

The difficulty is a little steep, seeing how it takes a lot of punches to knock your opponent down, and it has the arcade Punch-Out!! blocking system (you have to press down to block down, ugh). It’s pretty obvious the developers were huge fans of Punch Out!!, and they did a great job updating it for the Game Boy Advance.