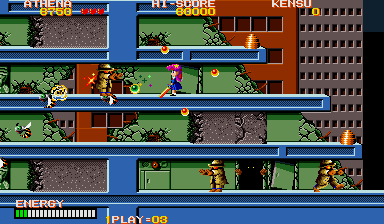 After releasing Athena, SNK apparently decided that they liked the character so much that they’d re-use her in a completely different game. The result is Psycho Soldier, which takes the Greek goddess and re-imagines her as a psychic pop idol fighting demons in modern day Japan – quite the change! Within the context of the story, this “new” character, Athena Asamiya, is the distant descendant of the heavenly one, and whose inherited powers are slowly revealing themselves. The game offers two-player simultaneous play, as Athena fights alongside a new character, the Chinese martial artist Kensu (later spelled Kensou), who is also her guitarist. The concept is that aliens have invaded the planet and made their homes deep within the Earth’s crust, so the two soldiers use their abilities to fight back. Keep in mind that the word “psycho” in Japanese is closer to the meaning of the word “psychic”, rather than the common native English usage, which is short for “psychopath”. 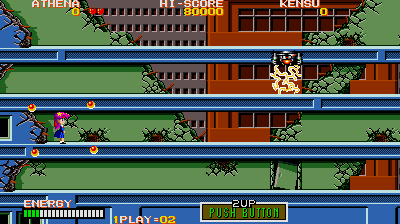 Psycho Soldier plays a lot like Capcom’s SonSon, which had been released a couple years prior. It’s a mixture of a shooter and a platformer, with the screen being divided into four floors. The screen is constantly scrolling forward, and you can jump between levels by pressing up or down. While SonSon was fairly stark and simplistic, the stages here are more involved here, with many more obstacles to avoid and gaps in the floor.

The heroes can attack with their regular psychic beams, as well as an attack called the Psycho Ball. These are in limited number, though they rotate around your character, up to four at a time – extras are stored at the bottom of the screen, though you can actually hold more than can be displayed, up to 18 total. The balls technically can absorb projectiles, but since there are large gaps between them, they often fail to do their job. When thrown, their effect depends on the level of the “energy” gauge – in its default form, the ball will be shot forward and then split upwards and downwards when it hits something, but in stronger forms, it can bounce around, or even penetrate straight through objects and enemies. If a ball manages to block an enemy projectile, it will sap a bit of energy. Whenever you’re killed, you re-enter the screen as a flying UFO, able to zoom around the screen and zap anything with abandon, until you turn back into human form and end up restricted once again by the laws of gravity. 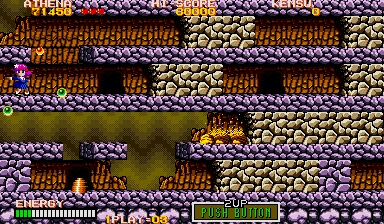 The levels are filled with destructible bricks, which hide most of the power-ups. (Other than the main character, this is the only real relation to the original Athena arcade game.) Other than the extra psycho balls and energy enhancing beams, you can also find swords to increase the strength of your main beam weapon, items that turn everything in the screen into power-ups, beams that sap your energy, and arrows that increase or decrease the amount (and difficulty) of the enemies in the level. Every once in awhile, you’ll come across a green egg – if your energy is too low, this will just burst little caterpillar enemies, but if it’s near max, it will reveal an item that will cause your character to transform into a gigantic beast. Athena will morph into a phoenix, while Kensu will turn into a dragon. In either case, you can fly up and down the screen and blast enemies with their fire attacks. Here, your energy gauge acts as a life meter – once it runs out, you’re back in human form. In two-player mode, the human can also hop on the back on the transformed character.

There are many aspects which turn Psycho Soldier into an extremely difficult game. This isn’t a shocker for most 80s arcade titles, since that’s a given, but many are unique to this title, just because there are’t very many like it. In a typical shoot-em-up, you have a full 360 degrees of motion in order to move around and dodge enemies. Here, you can only jump between four planes. That would be fine if enemies had the same restrictions, but they don’t, often using spread projectiles that are incredibly difficult to dodge. The visual layouts of the stage make it easy to just focus on threats directly on your level, but enemies on other floors can jump between them, often taking you by surprise if you’re not careful. Couple that with the fact that there are many walls and other obstacles that impede movement, and it can become very claustrophobic. The levels are also pretty long, and fairly repetitive, though this isn’t that different than an average shoot-em-up from 1987. 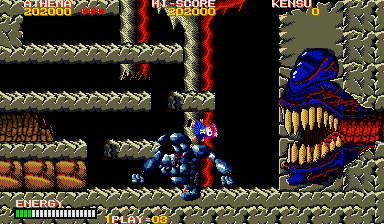 Adding to the difficulty, every time you attack, you stop in your tracks for a split second. Many enemies take multiple hits to kill, as do the blocks you need to destroy, so the whole game has sort of a choppy feeling to it. It’s greatly to your benefit to find (and keep finding) the sword power-up, since it ensures that you’re strong enough to destroy most blocks, and beat most enemies, with just a shot or two. Theoretically, the psycho balls should help remedy this, but their attacks aren’t really strong enough to be useful, at least at the default energy level. Plus, when you die, you both lose all of your psycho balls AND your energy drains completely, in addition to losing power-ups. Power-ups are prevalent as long as you keep destroying blocks, but death is still a major setback. The game was clearly balanced for two-players, so single player is a pretty rough time.

In spite of its toughness, Psycho Soldier is still pretty decent, especially owing to its visuals. They’re a little gaudy, but they give the game a strong a visual identity. Each of the six levels has its own theme too, ranging from ruined cities, decrepit sewers, dank volcanoes, the lost city of Atlantis (!!), and the biological headquarters of the aliens themselves, which could have come out of Contra. There are bosses at the end of each stage, and while the first few are basically large buildings you need to destroy (a la SonSon), later areas have large foes that need to be destroyed, some of which are gigantic multi-segmented creatures.

But one of the biggest draws of the game (and the reason why Athena is a pop idol and not just a psychic schoolgirl) is the inclusion of a vocal song. Technically this isn’t the first arcade game to feature one, as that credit goes to the Journey arcade game released in 1983. However, that title cheated a bit because the cabinet just had a tape that played the music. (It also wasn’t released in Japan.) Psycho Soldier instead plays its theme with the arcade board itself, with the instruments rendered in FM synth, and the sampled vocals implemented via PCM. The sound quality is obviously pretty low, but it actually is an incredibly catchy song. A full length, non-game version of the song was included on cassette tape with the Famicom version of Athena. 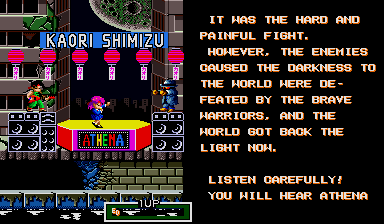 The song is called, appropriately, “Psycho Soldier”, and is sung by real life (and up-and-coming at the time) J-pop singer Kaori Shimizu, who also provides Athena’s voice samples. The game was released overseas, with the song (and most of the voices) translated into English. The singer for this version isn’t the best, to put it nicely, sound pretty amateurish. They also literally translated the phrase “Athena ikimasu!” (belted out every time you respawn) as “Athena, I will go”…which is technically accurate, but isn’t even remotely natural English. Something like “Let’s go Athena!” would’ve sounded better.

Incidentally, the peppy theme song and cutesy characters are completely betrayed by the dark, almost post-apocalyptic setting. The heroes do put on an impromptu concert at the ending, even featuring one of the enemies as a back-up dancer – how nice that they worked things out!

Psycho Soldier never quite had the same reach as Athena, because it never got a home port, at least in Japan – a Famicom port was planned but canceled before it was even shown. On the other hand, it did see release on a handful of European home computers, for the Commodore 64, Amstrad CPC, and ZX Spectrum. The visuals are obviously a huge step down in all versions, and Athena is now blond, for some reason, at least in the versions that are in color. The Commodore 64 version is the best of these, relatively speaking, though without the same speed or density of enemies, it doesn’t quite feel right. Two player mode is gone too, and most of the bosses are missing, so you just need to destroy a wall at the end of the stage. This is the only version that has music too. Obviously they can’t replicate the vocals, and much of the soundtrack outside of the main theme is cut out anyway.

The Amstrad CPC version looks similar to the Commodore 64 version, but it’s much worse – not only is it incredibly slow and choppy, but the screen doesn’t scroll at all. Instead, it uses flip screens, and you need to walk forward manually to advance. The ZX Spectrum version has the proper scrolling and better speed, though it’s simplified even further, primarily because there are only three floors instead of four.

The computer versions are mostly known for its ridiculously 80s cover art, which renders Athena as a buff fantasy warrior women – sort of like Chun-Li as played by Adrienne Barbeau – instead of a pink haired school girl.

For a long time, Psycho Soldier was a forgotten bit of history, only really referenced as the origin of Athena and Kensou in The King of Fighters series. However, an emulated version of the game appears on the SNK Classics Vol. 0 collection for the PSP. This was only released in retail form in Japan, though in North America and Europe, the games were broken up and distributed individually as PSP Minis on the PSN. It’s a nearly perfect port, though the game pauses briefly mid-game whenever a new piece of music is loaded, and it’s missing ad-hoc support, so there’s no multiplayer at all. This makes it impossible to play as Kensu, since he can only be controlled by the second player. The SNK 40th Anniversary Collection for the Switch includes an emulated port as well, which lets you switch between regions to hear both versions of the theme song. 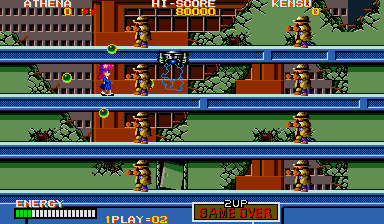 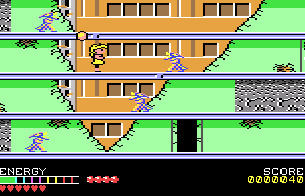 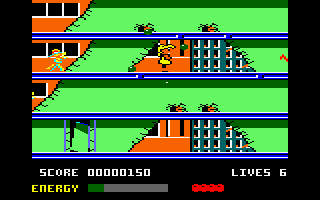