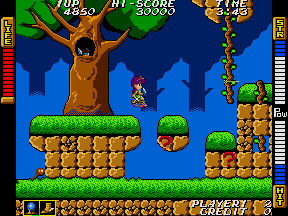 The SNK of the mid-80s was mostly known for military-themed action games like TNK III or Ikari Warriors. Athena is one of their outliers, created as part of the “gal game” phenomenon, where cute girls were given starring roles in video games to attract wider audiences. It re-imagines the Greek goddess as a purple haired bikini clad warrior, serving as the princess of the Kingdom of Victory. Upon exploring a basement and opening the “Door Which Shouldn’t Be Opened”, she accidentally finds herself transported to the “Fantasy World”, ruled by the evil Dante (basically Cerberus) and must fight her way back to her home land. There are eight stages in total, each termed as “worlds” – Forest, Cave, Sea, Sky, Ice, Hell, Labyrinth, and Final – with some areas and enemies very loosely inspired by Greek mythology. 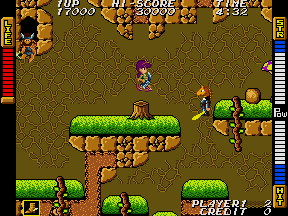 Although it’s a side-scrolling action game, Athena leans into RPG territory, with a large inventory of power-up items to hunt down and equip. (Both sides of the screen have bars that indicate your health, attack power, and defense.) By default, the heroine can only attack with kicks, but enemies will randomly drop their weapons for you to pick up and use, plus each stage is littered with destructible blocks hiding secret items. There are 13 weapons in total, each having different properties – blunt items like clubs and hammers can break bricks easily, while swords are more powerful but generally take more hits to smash down walls. Arrows have much great longer range but aren’t as good as breaking things (the weakest class can’t break them at all), while magic is generally more powerful. Unfortunately, since enemies typically drop their weapons, it’s easy to accidentally pick a weaker one, causing you to lose whatever you have equipped in exchange. You’ll also need to be on the look out for certain types of flowers that sprout up around you, which, when hit, will unleash life-restoring hearts.

Athena begins the game fighting in just a red bikini, but the game tacitly admits that this isn’t terribly useful for combat, so there are nine pieces of equipment to find, including helmets, shields, and armor, which are visibly equipped on the heroine. Armor degrades after getting hit, shields can protect from certain attacks, and helmets let you smash bricks with your head. 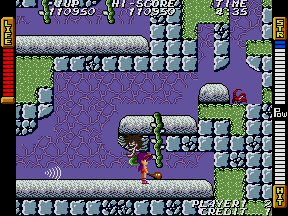 There are also nearly thirty other items you can find, including mirrors, crowns, and crystals, to enhance various abilities, hourglasses to extend the timer, a sailor fuku to add an extra life, and a few dangerous icons that can downgrade your status. Of all of these, one of the most important that you’ll need to obtain regularly are the Shoes of Icarus, which greatly improves Athena’s jumping ability – without it, navigating the levels is a gigantic pain. There are also the Wings of Pegasus, which lets her fly, and the Shell Necklace, which turns her into a mermaid for the few water sections (this isn’t mandatory but it does make these sections much, much easier). If you find the lamp, then you can also hunt for a secret level exit, which lets you skip the boss fight and head to the next stage. (If you manage to find the door without the lamp, though, it’ll random warp you somewhere else.) This absolves of you dealing with those particular headaches, but at the same time, you end up losing out on whatever goodies that the boss would provide had you confronted them.

The levels scroll left-to-right, with pits regularly spread throughout. Rather than dying, however, these will take you to the bottom tier of the stage, which is typically more dangerous but also has many more bricks to destroy, and thus many more power-ups. Bosses are nearly impossible without the right items, so you’ll generally want to visit them to make sure you’re well equipped. However, since you can’t backtrack, there’s not much you can actually explore. Which is just as well, because the same items are always hidden in the same blocks, so you can memorize where to find everything after venturing through the stage a few times. 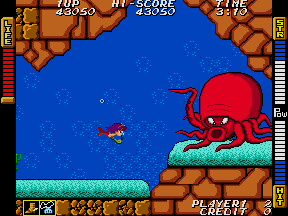 You’ll probably be doing this a whole lot, because there are no mid-level checkpoints, and you’re tossed back to the beginning of the stage upon death. Worse still, unless you have one of the items that preserves your equipment, you’re stripped of pretty much everything upon respawn, so you need to go through the same process to smashing up bricks and re-obtaining any equipment you may have lost. It’s hugely tedious, and the only remedy against this, as with many 80s arcade games, is simply to make sure that you never get killed.

And that’s a problem, because the action of Athena is a total mess. Enemies are quick and aggressive, and unless you have the right items, they’re hard to fend off if more than one is attacking at the same time. There’s no invincibility time after taking a hit, so a single brush-up can drain huge amounts of health – one of the very first enemies right at the beginning of the game can kill you outright, if you’re not careful.

Whenever equipped with a weapon, Athena holds it out right in front of her, but when she attacks, she just kind of flails it around, and there’s no real reach to anything. The basic hammers and swords are extremely difficult to wield effectively, so you’d better find the more powerful items like the flails or the magic spells if you hope to survive. The jumping controls are atrocious too. Athena can barely catch any air when jumping, and while the boots give her some added height, it still feels awkward as hell. There’s just nothing about this game that feels natural.

It’s kind of a shame, because Athena really is a hugely ambitious game. In 1986, the side-scrolling platformer was in its infancy, with earlier games being more straightforward like Super Mario Bros, Pac-Land, and Ghosts ‘n Goblins. This game has branching routes, a huge arsenal, and tons of bonus items, many which require either substantial note-taking or a strategy guide to uncover. But the core game is so shoddily programmed to the point where it’s incredibly difficult to enjoy. 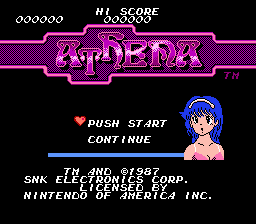 Athena is more well known to non-Japanese gamers thanks to its NES port, which was released worldwide. It was developed by Micronics, who also handled the 8-bit ports of the first two Ikari Warriors games for SNK. Those releases were minor disasters, and this one is not much better. It manages to mimic the jank of the arcade game fairly well, while adding in extra problems, like substantial slowdown and flicker when too many enemies are on the screen. Some level designs are simplified, which isn’t necessarily a bad thing considering how they had a tendency to drag on. The graphics aren’t great but are about par for a 1987 NES game, while some music tracks are removed, and what’s left ends up sounding rather poor, though it’s not like the original tunes were anything special.

However, many areas in the arcade game were rather samey because they used the same background tiles with different color palettes. Here, each stage has been given more distinct visuals – the hell stage actually looks more like hell – though it’s still quite garish. A portrait of Athena has been added to the title screen, who gives a wink upon pressing the Start button. It was probably meant to be cute, but instead it looks really creepy.  A few of the items have been cut, and a few extra ones are added, including one that decreases your timer, rather annoyingly. The only improvement is that the boots have been cut, and Athena can now high jump without needing to obtain them. Also, the arcade version lets you continue infinitely as long as you keep pumping in credits, while in the NES version you need the “K” icon to continue. This port is actually even harder than the already challenging arcade game, and that just takes the difficulty level from “hugely troublesome” to “nearly impossible”

The disparity between the American and Japanese cover artwork is a good barometer for the differences between the markets. The Famicom version is pure pink, with the cutesy Athena, wearing just a bikini, giving an awkward smile. The NES version has more typical fantasy artwork, which is actually much better drawn…but it also presents something far more dramatic than what’s actually in the game.

The Famicom version came in a large box, which houses a bonus cassette tape that contains a full length vocal version of the theme from Psycho Soldier, the pseudo-sequel to Athena that had been released in arcades around the same time this home port had been released. As a complete set, this is actually a valuable collector’s item, even if the game itself is not particularly well regarded. The Psycho Soldier theme was used in television advertisements for the game (which included hand-drawn animation) but doesn’t actually appear within the game itself.

Athena was also ported to Commodore 64 and ZX Spectrum by Imagine, all of which are worse than the NES version. The Commodore 64 version is the standout of these, relatively speaking, though it uses single color sprites that make it look like an MSX game. It also features a fairly decent soundtrack conversion by Martin Galway. However, the incredibly bad title screen is legendary. The ZX Spectrum versions are much more sluggish, though this is the only one of these ports to keep the arcade game’s UI layout. Both of these versions are missing some of the stages, and which ones are present are shuffled around a bit.

The arcade version of Athena has been featured as part of a few compilations, including the Japan-exclusive SNK Arcade Classics Vol. 0 for the PSP, as a downloadable PSP/PS3 Mini on the PSN, and on the SNK 40th Anniversary Collection for the Switch, the latter of which also includes the NES game. 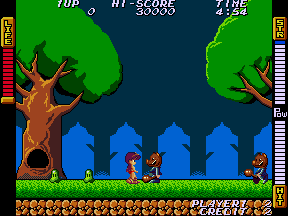 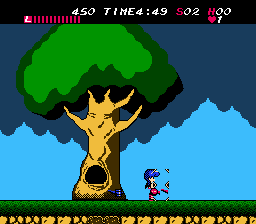 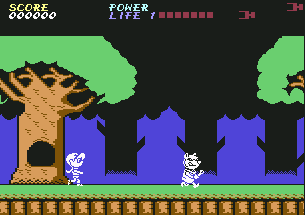