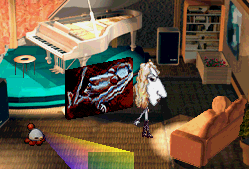 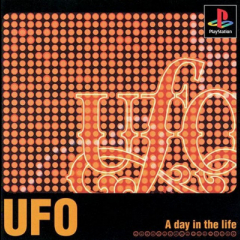 After an enterprising start with outcast RPG Moon, Love-de-Lic displayed no signs of being intimidated by the public’s shortage of interest for their revolutionary product. While Nishi would spend the next three years of his career planning his next blow at videogame conventions, it was Taro Kudo’s turn to assume control and share his own vision as a main designer. Under an unusual packaging style, with a game disc whose printing resembles a common CD-R, UFO: A Day in the Life is an original game that strays far from the intricacy of the RPG system, fitting right into that category of games whose singular style lacks definition.A group of aliens boarding a flying saucer stationed outside the Earth’s gravitational field visits the blue planet in a rescuing mission. Over fifty alien creatures have gone missing from a UFO crash in an apartment roof. These different species are now living underneath the coating of visible reality, interfering with the life of humans and animals. A search party is launched in order to salvage them, but the mission is aggravated by the fact that the rescuer, the playable character, is also unable to perceive where the aliens hide and must use a device named COSMIC in order to unveil them. This electronic device planted on the top of the character’s head resonates with alien presence, displaying an icon at the top corner of the screen wherever one such being is nigh. Much like a common camera, it allows the player to take up to ten photos of the spaces where the missing entities may reside, later to be analyzed back in the space craft by an eccentric character named “Mother”, who eats the negatives and produces images, if that is the case, of the hidden aliens. 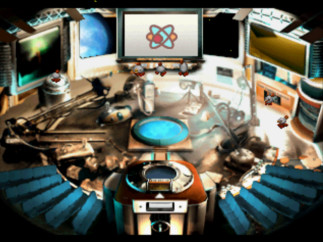 UFO is a game hard to associate with any of the popular genres. While there is something very RPG about it, the fact remains that it is essentially a “puzzle game” where the player is able to visit the same locations in at different hours of the day in order to learn the routines and find the anomalies which take place. For instance, when the cat on the roof, gazing at the sky, is seen with his fur standing up and then running away, it’s a good indication that he may have been in contact with an alien. The central and final objective is to take pictures around places where strange events take place, where the routines are disturbed, and then take a good look at the results produced. When a snapshot shows the alien creature in full body, or meeting certain requirements (sometimes the player must take a picture during key-moments in order to get a photograph of the alien performing a certain action), the team is able to locate and transport it back to the ship. As the player keeps rescuing these lost extra-terrestrials, new locations open as well as different times of the day in which to find them. 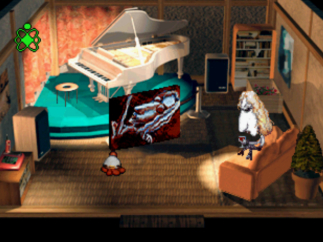 Even if the goal is only achieved by pointing the color-shifting frame to seemingly empty spaces, the process is extremely gratifying, sometimes even obsessive. As it happens with any good puzzle, UFO takes time and patience to complete. Other than observing the behavior of the apartment residents and learning their routine, Taro Kudo’s game plan also requires the player to listen and to be able to produce imaginative guesses. To discover all of the five dozens of creatures one must be able to understand each creature, their morphology and individual conduct.

The picturesque minimalism of Kurashima’s stereotypical hand-drawn characters contrasts with the pre-rendered backgrounds, where appropriate lighting effects, multiple layers and a massive amount of detail were applied. The animations are deliberately abrupt and idiosyncratic, stylized and capable of characterizing each personage with a unique feel: to see the painter shake the wine glass in his hands while gazing at his own picture in awe or the young and mindless teenager scratch her overly-thin arm is easily among the most delightful visual recollections from the 32-bit era. 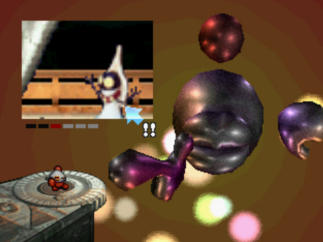 Of some relevance in UFO, music is something that resides somewhere between the subtle and the imperceptible. It does not mean, however, that the quality of the game’s compositions isn’t suited: the very nature of the game prevents any musical score to be placed upfront along with the visual action, or even the precious sound-effects which guide the player in some laborious puzzles. Melodic themes appear in the beginning of each phase, mostly small sound clips that accompany the introduction into the space of the room. Other themes, when the player is exploring the mother ship, consist of space-age synthesizer loops, very inventive and absorbing. In the core of this unusual game lies a very inventive concept which deserves to be understood. First of all, there’s a great deal of alien typologies, many kinds of creatures which the player must rescue, giving the impression that alien life isn’t as straightforward and as dull as it is often depicted, through the prevailing image of grey or green humanoids that kidnap people in the middle of the night to make experiments on their bodies. Humans are essential to the game, but they inhabit another distinctive layer of the game’s reality, along with that where our alien character operates: they cannot see the character, but the player can see them. Below these two stratums of the game’s fiction is another one which is offered in small fragments of time and space, captured in the minute frame of the cosmic camera, displaying the lost, careless aliens who are invisible to both the humans and the rescuing party.

Underneath it all, UFO presents an alternative and cheerful depiction of what alien life could be like, the non-terrestrial entities operating with their own agenda and fulfilling their own needs in the world of humans, masked and protected by their ordinary invisibility. Like some sounds are known to be inaudible to the human ear, we also know there are other spectrums of the visible universe which our eye or senses cannot perceive. Strange things happen around us all the time, events which occur right under our noses and which we ignore or neglect. But this game allows for us to be part of that undetectable world that surrounds: to live a day in the life of an extra-terrestrial.