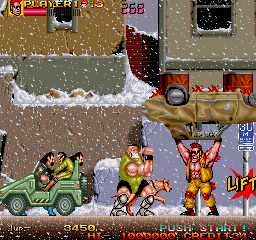 Though it’s not as well known as its ninja-riddled cousin, Two Crude is as close to a sequel as Bad Dudes ever got. Rather than saving the President of the United States, you are given the task by the Commander-in-Chief himself to clean up New York of a gang called “Big Valley” in a post-apocalyptic year 2030. Seems the gang took over as the government tried to reconstruct, fighting back with bizarre weapons and mutants. Obviously the dudes up to this job can’t be bad, but crude. Besides, there’s a huge paycheck coming their way if they succeed. 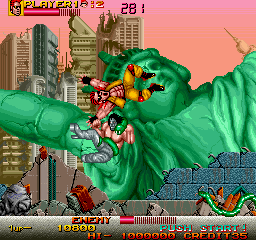 The graphics made a huge leap in the 2 year gap between the games, filling the screen with big brightly colored sprites everywhere. Data East flaunted this new prowess by sticking graffiti and grime all over. The nameless Crude Dudes and all the enemies they fight are much more expressive, if more cartoonish, than any of the characters in Bad Dudes. The gameplay was expanded with a new grab button, allowing the dudes to pick up objects or enemies or even each other to toss or at baddies for huge damage (plus some injury to your fellow player should you throw them at him). The dudes can pull off a quick roll to evade, and can punch directly up.

The wrecked NYC is littered with so many cars and rocks and signposts to bash and crush whatever comes your way, but also has plenty of walls to knock down in order to progress. The most standout stages are the nuclear winter and huge tornado storm stages, having tons of snow and debris fall and fly by as the stage goes on. As an added touch, the falling pieces of New York on the stormy level can be punched back at enemies. Plus there’s dozens of crazy weird gang members to fight, ranging from midgets to chubby cyborg jocks to maniacal bombers and more. It all adds up to an odd blend of Mad Max, Escape from New York, and a little touch of Fist of the North Star. 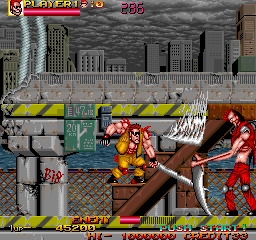 If outrageous bosses are your kind of thing, Two Crude has them in spades. The boss of the first stage is a giant Jake “The Snake” Roberts, who’s whipping you with his trusty python and snaring you in it. From there, the mutants and cyborgs grow more outrageous with rhinomen and pillbug monsters and a spider boss that can eat you up and spit out your skeleton in one instant death move. Not only that, but one boss turns out to be a robot under his skin and launches his head at you, and another pulls off his arm to reveal what appears to be a Psycho-gun from Space Adventure Cobra. The craziest of all has to be the short evil Santa Claus-dressed imp in the snowy level tossing deadly syringes and explosives from his sack at you. As an added touch of humor, the final boss is revealed to be a tiny, old mad scientist that tries in vain to pummel you before you give him a few punches. After that though, he transforms into a freakish monster for a really tough battle before reverting back and running away.

The Two Crude Dudes themselves look rather silly, dressed as mohawk punks in shades and vivid vests with peace symbols on the back. They open their mouths every time they make their awkward jumps and do a hilarious victory dance/stretch after each stage playing solo or a big high five in co-op. Each intermission between stages has them punching a vending machine and having a cold one before moving on, the game telling you “Nice Fight” each time. Each time they’re knocked down, they shake their heads and say “What a day!” before getting back up. Their little face icons next to their health shirt into shock and even a skull once you die. It’s also great seeing them lift an enemy or boss and tossing them, every move or hit they make given a comic book “WHAM” or “CRUSH.” The game as a whole seems far more over-the-top than Bad Dudes. 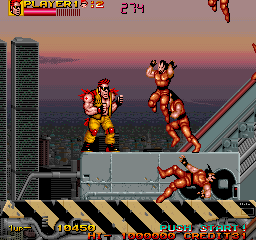 Unfortunately, many of the issues that plagued Bad Dudes are still here. There are only 6 stages in total, but they’re much longer, which can weigh on the tedium. The baddies and bosses have a lot more cheap attacks and can be harder to land hits on without something to toss at them, and there are not as many things to throw as you’d like. It’s also too easy to drop something you’re carrying trying to knock down a line of enemies just from taking a single blow, and it can be difficult to successfully grab a bad guy to fling at his friends. Be prepared to hear “What a day!” over and over as many bosses and the bigger minions knock you off your feet frequently. There are many mid-bosses throughout the game, which tend to become regular grunts in later levels. Your only saving grace is the relatively lengthy invincible time after you lose a life, giving you ample time to toss mutants around and lay a good smackdown. 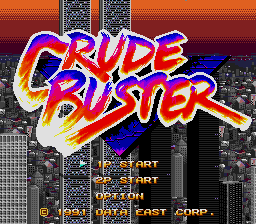 Crude Buster, the Japanese version of Two Crude, had a few differences. Aside from the text at the beginning and end being (mostly) in Japanese, stages 2 and 4 are switched around, meaning you have to tackle the tougher storm level bosses earlier. The mid-stage vending machine is an obvious Budweiser machine rather than the Power Cola machine elsewhere in the world.

Unlike Bad Dudes, Two Crude didn’t receive a slew of home ports. The only home versions are the arcade perfect port on the same Data East Arcade Classics for the Wii that Bad Dudes appeared on, once again with unlockable art and extras, and a Genesis/Mega Drive conversion made in 1991.

The music in the Genesis version is fairly close aside from a few vocal samples and the voices are nearly spot-on too, though mostly limited to grunts. The intro cutscene was even given its own track that is highly reminiscent of The Terminator theme. The same can’t be said for the graphics, though. The character and enemy sprites are faithful within the color range of the system, but are missing animations. The stages also take a huge visual hit, losing a lot of the background art and simplifying many of the locales and objects. None of the onscreen notices for lifting potential items or shaking enemies off appear at all.

The stages follow the Japanese arcade progression. The storm level has no tornadoes in the background or flying debris and lacks the pillbug mid-boss. Curiously, the little Santa imp in the snow level is wearing blue instead of red, though him throwing only bombs and no syringes is obviously due to censorship. The spider boss also doesn’t waste time trying to grab you from up above at the start of its first fight. The little scientist boss’ final form is a little easier due to lacking his ceiling baby-spawning and diving attacks. He no longer runs off or has dialogue with the dudes after being beaten either, allowing you the chance to kick him until he fades away. The intro itself is kept mostly intact, though lacks the mushroom cloud devastating New York. Even the text at the ending was changed and expanded, no longer teasing a potential sequel that never came.

The game only gives three continues max, but vending machines are placed in levels to beat up and heal yourself with. In fact, the mid-stage transitional cutscene was turned into sort of a bonus stage to pummel the machine and grab as many sodas to refill your health. There are no differences in Genesis/Mega Drive regions other than the name of the duo and the title screen logo. 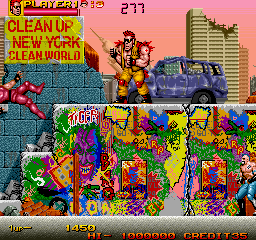 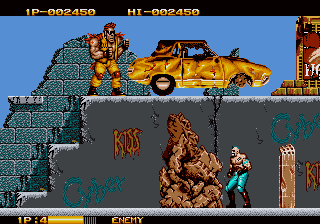 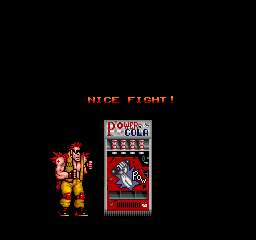 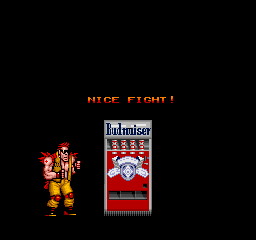 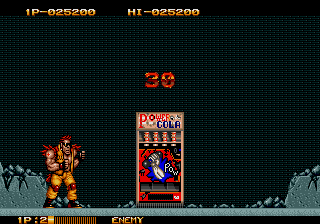