When it comes to gaming habits, the Japanese tend to be a little xenophobic, as immensely popular titles Western titles tend flounder on the sales charts. This has not always been the case, however, as there have been a few foreign titles to find acceptance in the past. Computer games like Lode Runner and Boulder Dash found substantial success, to the point where Japanese companies licensed and remade them several times. One of the most curious of these is Spelunker, programmed by Tim Martin and initially published by MicroGraphicImage, then later by Brøderbund. It’s a strange case, because it did not find any huge success in its home county of America – it was popular at its release in the mid-80s, but no one really remembers it – but rose to the realm of a video game cultural icon in Japan. This isn’t because it’s a misunderstood classic or anything. Heavens no, Spelunker is terrible. But it’s a fascinating case of how an extremely frustrating game with little (initial) redeemable value somehow became a success for the most bizarre reasons. 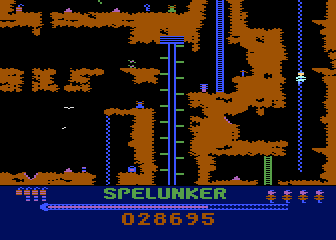 Spelunker was originally published on the Atari 8-bit and Commodore 64 computers. Similar to Pitfall II: The Lost Caverns, it puts you in the role of the titular unnamed spelunker, who seeks treasure in the pits of an enormous cavern. There is a time limit, as indicated by the amount of oxygen remaining at the top of the screen. The only way to fend off ghosts is by blowing your air gun at them, further lessening your supply. The ghosts also appear randomly, usually at inopportune times, and can greatly screw you over. The game seems to present some kind of non-linearity by letting you pick different shafts at the beginning of the game, but in reality you’ll usually need to explore and gather almost everything, including air tanks to refill your oxygen, bombs to destroy rocks, flares to distract bats and colored keys to unlock various doors. There are, of course, plenty of score-giving treasures to find too.

Every single step is dangerous – the hero must avoid pits, avoid deadly bat droppings, jump over steam geysers and even contend with the ghosts of his fallen predecessors. But the deadliest obstacle of all is the absurdly tricky control scheme. You can only survive a fall about roughly the height of your character – any farther and you’ll simply fizzle out of existence and respawn at a nearby checkpoint. It’s all incredibly sudden, especially since you don’t even get the joy of seeing your little man fall to the ground. This is only the beginning of the problems, because there are numerous quirks involving character movement. Perhaps it is years upon years of playing side-scrolling platformers, but usually you can walk off a horizontal surface and expect the momentum to carry you at least a little bit, allowing you to potentially reach the next platform. Not so in Spelunker – you drop like a rock if there’s so much as a pixel of space between the floors, and it’s a lesson you learn almost immediately as you step off the elevator at the outset. 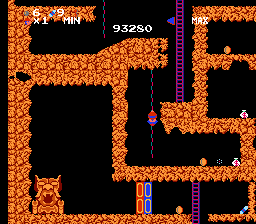 Another issue is the tiny piles of rubble which somehow causes you to leap automatically in the opposite direction, usually to your death. Or the bombs, which are needed to destroy walls and can kill you if you’re too close when it explodes, but gives absolutely no indication of the safety radius. Or the low ceilings which can totally screw up your jumps. And the most frustrating of all of these is how to deal with the many ropes hanging in the caverns. You’ll usually need to jump back and forth between them, but you have to press a direction and the jump button at the precise same time, or else your character will interpret this as a command to walk off the rope and die almost immediately. It is also nearly impossible to tell how far you can crawl down a rope before you drop, which will usually result in yet another death.

When the Atari and Commodore 64 versions of Spelunker were initially released in 1984, it was applauded for its seemingly large game world. After all, most platformers only scrolled from left to right – Spelunker does too, but spawns a great vertical depth. Although it’s technically divided into levels, they also transition smoothly from one to the next, giving the appearance of one huge game world. (Certain computer versions do stop to load, however.) While technically not all that large – a perfect player can see it all in less than ten minutes – it sure feels huge. The Atari and Commodore versions are very similar, with the Atari one offering a larger resolution and therefore slightly better graphics. 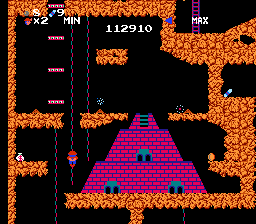 While the original versions maintained some level of popularity, Spelunker took on a life of its own when it was ported to the Famicom. The original game had some fairly restrictive rulesets, but this version makes them way, way worse. The distance you can survive falls is even shorter, making it all too easy for even the most innocuous jumps end in death. The controls are even touchier, especially when it comes to jumping off ropes, resulting in even more deaths. It’s here where Spelunker truly gained the reputation for being insanely masochistic.

Some might criticize the game for not developing levels in accordance with the limitations of the control scheme, as if it were simply an oversight. The truth may be far more cynical, in that the stages seem to be deliberately created to frustrate and infuriate anyone who would ever dare to play it. It is possible to beat it, although it require strict adherence to the control scheme and near flawless controller inputs. It is also quite possible to enjoy the game unironically, as like so many aggressively difficult games, it has developed something of a cult following amongst the hardcore set, who see its awful control scheme as a challenge to overcome. 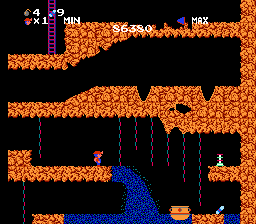 As for other differences, the level layout is similar, although the initial elevator shaft does not go down as far, and the Japanese versions do not need to stop to load between stages. The original Atari 8-bit version opened a part of “Pictures at an Exhibition” by Modest Mussorgsky, but was changed in all other versions, including the later re-releases, to a much more dramatic, foreboding song. The computer versions are all silent during gameplay, except for the sound effects, while the NES/FC version adds a background song. It’s short and simultaneously catchy and irritating. It’s buried its way strongly enough into the Japanese retro culture consciousness that you can find many remixes on official and doujin music CDs. Repeated plays in the NES/FC version also unlocks increasingly difficult quests, using the same layout but different color palettes and various aspects becoming more difficult, such as making the keys invisible, although keeping them in the same location. Irem also released Spelunker on the MSX. It’s mostly the same as the NES version, with slightly worse graphics and a much slower play speed.

When it was released on the NES in 1987, not many American games paid attention to it, and the few that did play it did not speak of it kindly. Things were technically not much different in Japan – it did not have some mystical characteristic that only the Japanese could appreciate – but for whatever reasons it sold quite well. It quickly gained reputation as a “kusoge”, reviled for its sloppy controls but simultaneously admired for how hilariously difficult it was. The reputation of the hero even created its own slang terminology, commonly used in sports. (スペ体質), “Supe taishitsu” or “Constitution of a Spelunker” means someone who gets injured very easily, with the verb “superu” meaning to be crucially injured due to something extremely minor, both referencing the fragility of the game’s hero. Baseball fans have applied this Fukuoka SoftBank Hawks player Hitoshi Tamura, due to his ridiculously long list of illnesses and injuries. 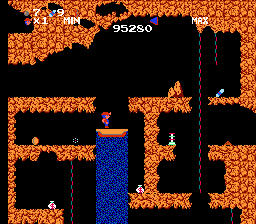 A few months before the home release, Irem also developed a version of Spelunker for the arcades. While the basic concept and gameplay is the same, it’s been drastically reworked to focus more on action and less on precise platforming. For starters, the gun was rarely used in the original versions, only to scare off ghosts. Now, it’s a standard projectile weapon, and the stages are filled with enemies to be killed. Bats don’t even drop guano anyway – they simply swoop to attack. Falling no longer kills you, even if you drop several stories – it just momentarily stuns you, then you’re on your way. The level layout is similar to the FC/NES version, and it also requires finding keys for the colored doors, but they’re not quite identical. There’s a greater focus on uncovering hidden passages, although most are easy to find.

The graphics are technically far better than any of the others, although the hero has a cartoonishly large head and an equally silly bright red nose. The graphics are much brighter, and along with the background – the original game was stark black – it’s a much less foreboding game in general, especially when considering how much easier it is than its brethren. It creates an interesting paradox though – while technically a “better” game, in removing what made it so unique, the arcade Spelunker doesn’t have a whole lot to set it apart, and ends up merely as another action-platformer, just one that happens to take place in a cave. 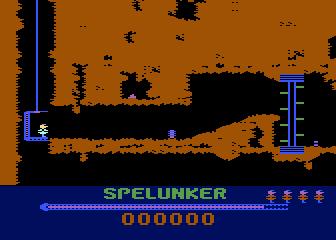 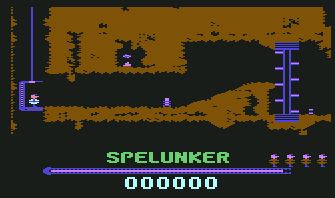 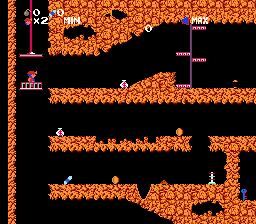 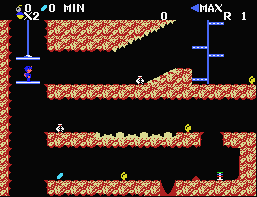 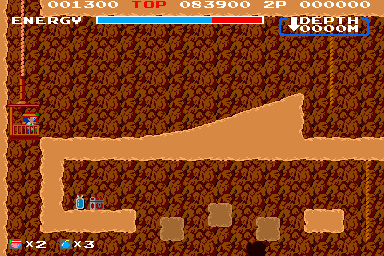 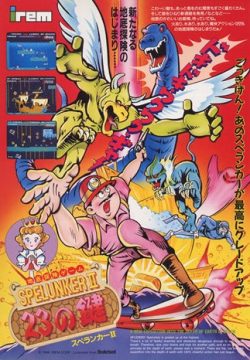 This arcade only sequel is much like the first, although unlike any of the other iterations, it’s an entirely new cave that’s not based on any previous designs. The color scheme is now a murky green, and most of the enemies are new. Further additions include scuba tanks, for some brief swimming segments, and a skateboard, the usage of which is as stupid as it sounds. There are a few new landmarks, like a wrecked ship, several dinosaur bones, and even a large, apparently still living brontosaurus. 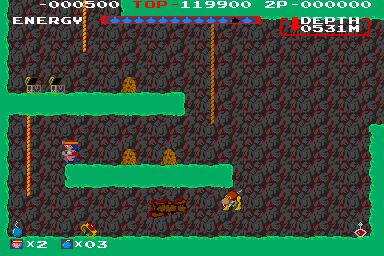 There’s some minor changes to the way the Energy meter works – instead of dying in a single hit, it simply drains the meter. However, while falling in the first game was basically harmless, here it will drain your Energy as well, potentially killing you outright if you fall too far. The end of each stage is marked with a brief cinema of the hero walking into a chamber to pick him a new treasure. The final treasure is a princess, granted to you as a reward for conquering the caves, which seems a little bit more sexist than usual. There’s a greater emphasis on hidden stuff this time around, but functionally it has the same pros and cons of the first arcade game. 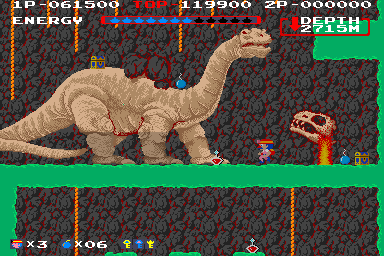