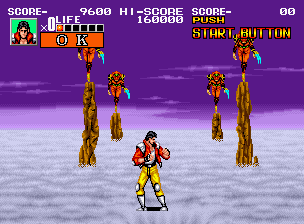 In the early and mid-90s, an all out war was brewing between arcade titans Capcom and SNK. SNK was Capcom’s only true competition in the fighting game genre (omitting Mortal Kombat, which was only popular in the West). Every game that Capcom made, SNK made their own version of it. Capcom made Street Fighter, SNK made Fatal Fury. Capcom made the 1943-vein WWII shooters, SNK made Ghost Pilots. SNK made Kizuna Encounter which featured tag-team combat, while Capcom made the Marvel vs. games… this goes and on and on for quite a while. These games were typically at least on par with Capcom’s work despite differences in graphical styles. But one area where SNK just could not best Capcom despite all their attempts was in the field of beat-em-ups. SNK’s first attempt on Neo Geo, Burning Fight, was an abysmal Final Fight ripoff, and right up there next to Legend of Success Joe as one of the worst Neo Geo games SNK has ever produced. Meanwhile, Capcom was cranking out incredible games like Final Fight, Knights of the Round, and King of Dragons, and Konami was nearly matching them with titles like Teenage Mutant Ninja Turtles, The Simpsons, and X-Men.

SNK’s second attempt at a beat-em-up was a much more admirable effort, and a lot more original. Rather than the typical game featuring rough guys and punk gals fighting their way through gangs of thugs on the mean streets of a corrupt city, SNK made a beat’em up where the world was being invaded by an army of undead warlords from the Sengoku period of Japan. Taking a cue from Magician Lord, your heroes could transform into other characters, each with their own abilities. Due to the setting, the title of their only beat-em-up franchise is Sengoku Denshou (literally translated as “The Folk Tale of Sengoku”), known simply as Sengoku in non-Japanese territories.

Sengoku takes place.. well, somewhere. It’s not entirely clear. It’s your generic post apocalyptic beat’em up city. At least until it gets caught in a trans-dimensional rift linking it to the astral plain, from which a horde of samurai and other denizens of feudal Japanese culture flow into the city and wreak havoc. To combat them is a duo of generic beat’em up dudes, but there’s more to these guys than meets the eye.

No, they don’t transform into giant robots or anything, but they do transform. The fusion of the two time periods allows the two brawlers to invoke the spirits of the heroes from the period for limited amounts of time. These heroes essentially cause the generic brawlers to function in an entirely different manner, making it seem like there are half a dozen different characters in the game, which is a lot more variety than usual for an early 90s beat’em up.

A samurai not unexpectedly wielding a katana. Hits a bit faster than the main characters.

A completely useless dog extremely adept at spinning like Sonic the Hedgehog and getting its ass kicked.

A really flimsy ninja who somersaults everywhere and is best used as an extension of your main character’s life bar. 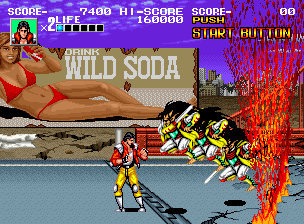 As you fight your way through the city, you’ll encounter different colored orbs. These orbs bestow upon your character enchanted weapons. Unlike Final Fight, you won’t lose these weapons if you’re knocked down or randomly after hitting someone. Each colored orb gives you a different weapon, most of which being different variations of swords (the coolest of which are a pair of katanas). These weapons can either be changed by collecting a different orb at any time, and there are also orbs that add projectiles to your standard attacks.

Progression through stages is a bit different from your usual beat-em-up fare. You’ll travel along a horizontal plain beating and slicing up badguys, but at various moments, you’ll be warped from the city into the heavens and a creepy chanting begins in the background. Usually in these segments you’ll fight a long succession of enemies or a boss, after which you’ll be dropped back down to the city. It’s pretty odd… but somewhat cool in a weird way. 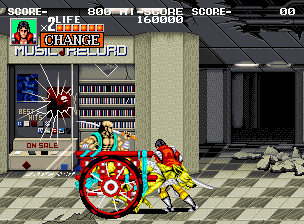 In spite of all of its originality, Sengoku is still a pretty mediocre game with major flaws in almost every layer of its design. Most prominently is its combat system. While the weapons and alternate characters are cool and all, it just doesn’t have a very good structure. You can’t hit your enemies in rapid succession like you can in Final Fight, and the frenzied button mashing and chain combos of beat-em-ups are one of their biggest accolades. This is because many of the enemies can be dispatched in one hit. This proves to be an annoying problem with larger enemies, because the combat basically consists of hitting someone once, waiting for them to recover, and then hitting them again after a few moments. This all gets repetitive after awhile, and Sengoku is pretty long for a beat-em-up.

Sengoku is also pretty lax in its presentation, at least compared to later SNK games. The graphics are really bland, the colors washed out and pale, the character sprites, particularly the player’s, are stiff and awkward with huge upper torsos and tiny legs. The only cool effect in the game is the reaction from most enemies when they’re hit with a sword. Much like in Strider games, when you hit an enemy with a sword, they’ll reel back with a huge gash appearing across their torso, nearly ripping them apart.

Sengoku doesn’t really impress with its sound either, as most of it’s pretty unmemorable. Aside from the aforementioned creepy chanting, none of the sound elements of Sengoku really stand out. Even the NGCD version isn’t very impressive. It has an arranged soundtrack like every other NGCD title, but the composition wasn’t good to begin with. 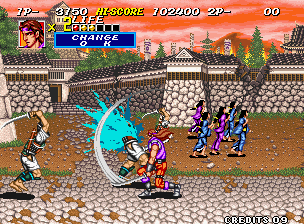 Overall, SNK just didn’t put a lot of effort into the first Sengoku. It’s passable at best, but just doesn’t hold a candle to any of its contemporaries from Capcom or Konami, which is a shame because it introduces a lot of cool and original ideas to the genre.

Sengoku was ported to the Mega CD in Japan by Sammy, and it’s a pretty accurate port, although the graphics had to be toned down due to color limitations, and the load times between plane switching are annoying. However, Data East’s Super Famicom port of the game is absolutely abysmal. It’s more or less a completely different game with similar motifs and material. All of the graphics have been completely redrawn, and somehow look a lot worse. The mechanics mimics Final Fight more, as enemies have life bars now and take a few hits to kill, but it’s even more dumbed down than even the SNES version of Final Fight. Rather than being able to transform into the other forms at will, power ups that cause your transformations are randomly dropped by enemies. The music is also completely different and agonizingly bad, and it’s also unbearably ugly. Stay away from this one at all costs. 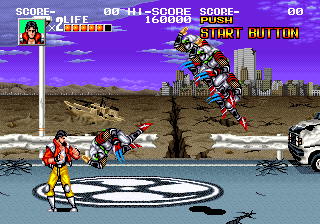 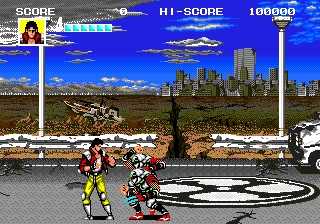 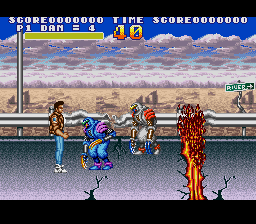