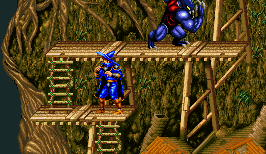 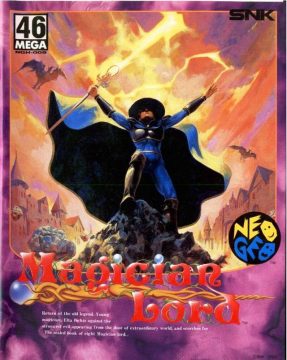 SNK’s Neo Geo hardware was most notable for its many fighting games ever since the inception of Fatal Fury in later 1991. However, before Terry Bogard’s quest to obliterate Geese Howard came to prominence, the good ol’ Neo Geo was not exactly laden with zingers. Some of the early games were alright, but one game in particular had a bit of a special quality to it that, while not making it an all-time classic, had it stand out above its brethren. Magician Lord, released in the freshman year of the NG’s career, was one of the best titles of its time and stands as one of the considerably less mediocre titles of pre-fighter SNK. It also stands as one of the more notable contributions from Alpha Denshi/ADK, a second-party developer under SNK who never really achieved great success but, as demonstrated via Magician Lord, had considerable potential. 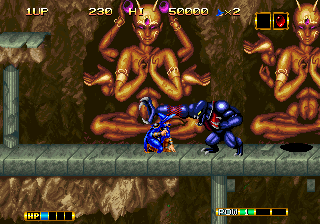 The plot is typical of a fantasy action setting: Elta, one of the last magician lords, must take on the unholy army of dark wizard Gal Agiese. Gal intends to revive the god of destruction, Az Atorse, using eight mystical tomes of power. As Elta, you must collect these eight tomes and send Gal and Az back into the dark void from whence they came. Expectedly, the setting comes with the territory of any good dark medieval setting: Fields, caves, castles, aqueducts, and bizarre alien architecture that may or may not be alive. 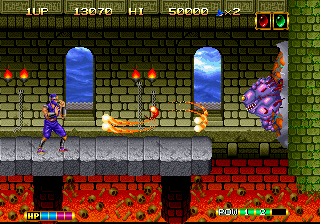 This game looks really dang good for the time, a fine demonstration of the Neo Geo’s awesome 100 Mega Shock power. Even today, it still looks rather impressive with its large smoothly-animated sprites and impressive rich-color backgrounds. From the multi-armed vaguely Hindu statues in the first level to the ornate palace hallways of the sixth, it’s tough to keep your jaw closed for an entire playthrough while marveling at its diverse visuals. The bold graphics are met with an equally ace soundtrack, loud and dynamic while keeping up a sense of urgency as demonstrated in the gripping first stage music. The second level has this sort of weird electronic synth warble to it that sounds oddly cool, and the fearsome boss track leaps up and tells you “THIS IS A BOSS” point-blank to your face. Even if the aesthetics aren’t up to the level of later Neo Geo games, they still hold up quite well for being an early release on the system. 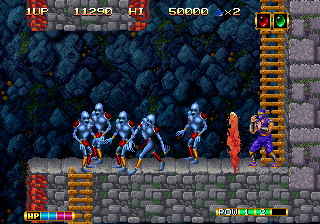 The game itself is simple but punishing! There are only have two buttons: Jump and shoot. Elta moves at a decent pace and can easily control his jump. He tosses out small blue crescent projectiles that move pretty quickly and are fired as rapidly as you can press, though only two shots can be on the screen at once. You can only fire in the four cardinal directions (down in mid-air), and your default blasts are not very strong, but treasure chests sometimes appear. Most of the items you find within are trinkets and baubles which merely boost your score total. You may occasionally find a glowing orb with a P on it which increases the power and size of Elta’s shots, and you can increase this power up to a third level if you’re lucky. Sadly, getting hit once drops your power level by one, so get used to having your default magic peashooter unless you invoke the other method of powering up; if you find a red, green, or blue orb, Elta will morph into a being of considerably higher power. What you become is judged by a somewhat odd combination system wherein you have a red orb by default, and the next orb you pick up determines your new form. The second orb gets booted to the first orb slot if you pick up another orb before you die. Each combination is as follows:

A bipedal dragon who spits out a steady stream of powerful fire but has short attack range.

A ninja who tosses out spiraling magic blasts, similar to default Elta’s projectiles but stronger.

A knight who tosses liquid balls that create pressurized water spouts which linger when they hit the ground.

An armored warrior who slashes out damaging medium-range crescent waves from his sword.

A strange being of pure electricity who creates a constant electrical burst from his hands. Very short range but able to keep the shock going while jumping.

An azure water esper who sends out freezing water blasts which explode in waves across the ground. Similar to Waterman, but more powerful albeit slower. 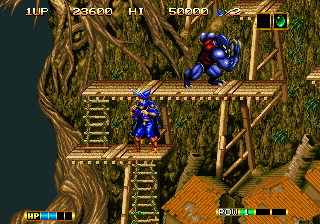 While most of these forms have slightly harder-to-use attacks than Elta’s default magic blast (particularly the Raijin’s very short-range one), it’s always a good idea to pick these orbs up as they completely restore your life meter and boost it beyond the maximum. Elta can only take a fragile two hits at base, though any transformation doubles his endurance to four notches. Getting hit twice deprives Elta of his newfound power and reverts him to his human form. You will likely have to get used to staying in human form more often than not, but you don’t have to slay every enemy to reach the end of the stage. Each level is structured with a main area with doors leading to several sub-areas; while some of the sub-areas contain power orbs, your main goal is to find the door that leads to the boss fight. Levels are often filled with traps a la fire, spikes, and pitfalls, and while they start out relatively straightforward, later levels are a bit more complexly structured. The worst it gets is a seemingly infinite corridor in the fifth stage where you have to know what ladders to climb lest you roam down hallways until death. It’s nothing as supremely baffling as The Super Spy, thankfully, but the stages do more than to just provide you with flat hallways that toss enemies at you. 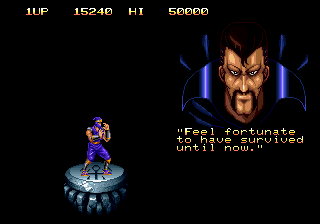 Make no mistake, however, as enemies ARE tossed at you quite liberally. Magician Lord is chock-full of impressive baddies with designs ranging from fantasy to eldritch. The first level alone has Cthulhu-esque squid spawn and stout demons with extending claws. Veiny winged grounded electro-birds, weird skeletons that barf eyeballs, and viciously agile catgirls are among the rogues you must face in your quest. The bosses are especially impressive, with each level having a sub-boss to fight just before the big boss. Some mid-bosses include an odd fish beast who takes diagonal dives at you and a warlock who conjures up horrid eyeless creatures, but the large end bosses are even more interesting. The first big bad starts out as a creepy stone face that crumbles to reveal an egg, which then hatches to reveal an ugly purple head that spits out fire shots. Other such wretched abominations include a sphere made of tree roots that fires off energy daggers, a long-necked parasite whom you fight in the mouth of an even bigger beast, and a frightening hell-hound with spikes where its eyes should be (who is sadly the easiest boss in the game). 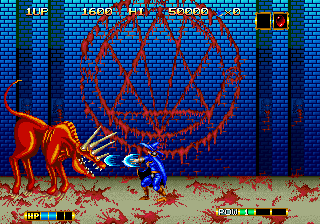 Magician Lord has a lot of style to spare, but the cherry on top is its terrible butchering of the English language. A fondly remembered aspect of SNK (and ADK by extension) was its failure to properly translate Japanese to English, thereby giving rise to the term “SNKgrish” where any text becomes a new dialect built upon the foundations of typos, malapropisms, and total nonsense. In this case, central villain Gal Agiese takes the liberty of taunting you before fighting each stage boss with a severely nonsensical phrase. Such gems of eloquent poetry include: “What imprudence, you human being! Face your trial by God!” “You, persistent guy. But your life ends right now.” “Your are very dangerous. Be dead down here.” These bits are even voiced in English by a massively bored or stoned actor who channels Lorenzo Music’s deadpan portrayal of Garfield. It really has to be heard to believe, but the most infamous phrase attributed to Gal’s presence is what you see when you run out of lives. As the continue counter ticks down, Gal’s stern countenance stares you down as the proclamation of doom rings above his neatly cropped coif: “Again changes to Hell.” 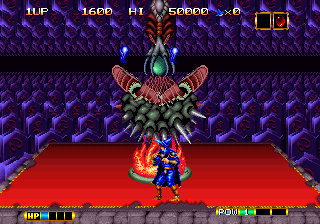 All these high points considered, Magician Lord is not bereft of frustrations. If anything, the main point that drags the game down as a whole is how incredibly brutal it is. It’s not particularly forgiving with Elta only being able to take two hits and with enemies being tossed at you left or right, but on top of that, you barely get any amount of invincibility time when hit. Early stages toss these winged jerks at you who fly like Medusa Heads from Castlevania but with the unfair addition of being able to shoot small shots at you. 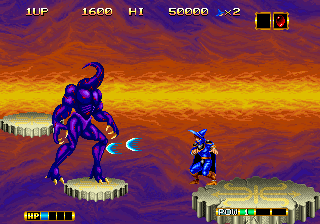 One level requires you to not get knocked off a moving platform while being swarmed with floating tentacle monsters, and another completely deluges the screen with harmless frogs who grow into obnoxious amphibious warriors who are hard to hit and harder to dodge. This would suck less if there weren’t a few points where about a dozen frogs appear on-screen and they ALL evolve at once. The sixth and seventh levels are unapologetically ruthless with throwing around incredibly quick enemies en masse like Santa Claus throwing around candy atop a Christmas parade float. Admittedly, this high propensity for death is mitigated by resurrecting on the spot after spending a life or continue, but Magician Lord is unmistakably a quarter-muncher where you’ll have to be inserting a lot of credits to make any significant headway. 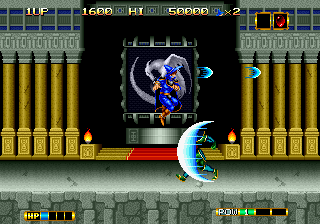 If you want a REAL challenge, the home console version of Magician Lord kicks you back to the start of a stage every time you continue, making the latter half of the game utter pain to try and beat. As a compromise, Elta can take three hits instead of two, and six instead of four if he finds a transformation orb. It’s still not quite enough to tide over the flagrant frustration that builds upon each new level, and the console version is only recommended for die-hards. All of its re-released emulated forms on various consoles – on the Wii Virtual Console, on the SNK Arcade Classics Vol. 1 for the PlayStation 2, Wii, and PSP, and as a downloadable game on the PlayStation 3 – use the rules of the console version. 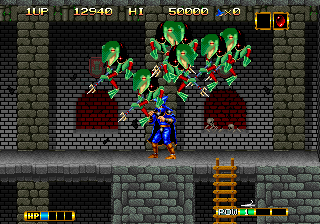 And that’s Magician Lord in a nutshell; cool and stylish if not decidedly infuriating. By all technical standards, this game is a standard action-platformer that’s more notable today for its aesthetics than how it plays. It’s somewhat stiff compared to other titles of its ilk and the credit-feeding nature will likely turn off anyone who wants to get as far as they can on one quarter. Regardless of how gruesomely punishing it is, Magician Lord is regardless worth checking out for any SNK die-hards and action game fans. If absolutely nothing else, the awesome might of Gal Agiese, master wordsmith, is worth risking again changes to Hell.