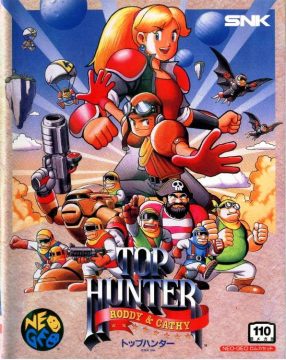 SNK created many notable franchises during the reign of the Neo Geo, but one that never quite caught on was an action side-scroller known as Top Hunter: Roddy & Cathy. This game is one of the few games to declare itself as “The 100 Mega Shock,” a term used during the first half of the Neo Geo’s life to describe games that use over 100 megabits in ROM. From the cool, crazy, and quirky bosses to the non-stop action with exciting visuals that goes on, this game’s 100 Mega Shock power definitely shows, compared to the much smaller SNES and Genesis games, which were typically around 8 or 16 megabits. 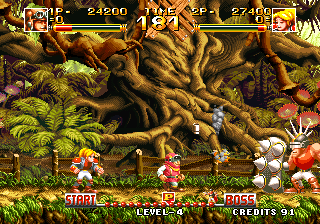 The first player controls Roddy, while the second player controls Cathy. Both players have the ability to extend their arms outward a-la Bionic Commando, with Roddy’s coming from his alien heritage while Cathy’s comes from cybernetic implants. Both are bounty hunters who are trying to hunt down their targets through planets consisting of single biomes. The player is given the ability to choose between going to the fire planet, forest planet, ice planet, or wind planet, before having a faceoff with the big bad in his dreadnought. 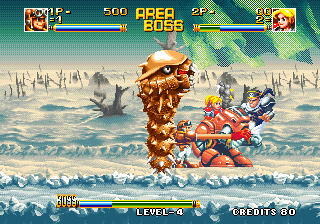 This switching mechanic is integral in getting through some parts of the game. There are also secret special moves that can be activated with certain commands, most of which are references to fighting games. Mashing the attack button will make Roddy and Cathy go into a combo, with Roddy eventually letting out a flurry of punches, while Cathy does a Hyakuretsukyaku/Lightning Kick move. Doing a quarter-circle forward motion and hitting the attack button very precisely will make the player do a Ko’ouken (or a hadouken with one hand) attack, while doing a shoryuken motion will make the player do a shoryuken/koho attack. Yoou can also do Terry Bogard’s power wave as well.

Players can equip rifles by hitting down while over them, and then shoot them by hitting the attack button until they run out of ammo, at which point they are thrown like a projectile. One of the coolest features is the availability of pilotable mecha. By defeating an enemy in one or finding one lying around, players can jump into a mecha that gives them more power, as well as guns that you can pick up. However, the mecha also has health, and the player will be forced out of it when it starts flashing. This can be seen as an influence to the Metal Slug series, which is similarly built around riding vehicles that you can hop into. Bonus games can also be found through secret areas in the level. 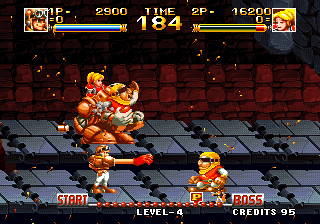 Each planet consists of two levels: the first ends with the players facing off against a dictator figure who has an uppercut and occasionally a vehicle or mecha, while the second level ends with the players facing off against their bounty, who also have a pilotable vehicle by their side. Fans of Treasure games such as Gunstar Heroes will probably enjoy these boss battles, as they are filled with impressively animated multi-sprite enemies. The final area has the player going up against all the previous bosses before fighting Captain Klapton, the final boss of the game.

The graphics are outstanding and have a nice cartoony vibe, with a great amount of slapstick thrown in. The sound effects are all clear, and the music, while too quiet in the arcade version to hear over the sound effects, is also excellent. Everything about the game really does feels make it feel like a Treasure game made by SNK. It is a bit on the easy side, but when you compare it to other totally brutal SNK side-scrollers like Magician Lord, it’s actually a nice reprieve.

The game was also released on Neo Geo CD, which has louder and clearer music at the cost of longer loading times. It’s also on the Wii Virtual Console as well. Since this game’s release, Roddy and Cathy have made cameo appearances in King of Fighters 1994, King of Fighters 1997, and King of Fighters 2002: Unlimited Match. Both have also appeared as cards in the SNK vs. Capcom: Card Fighters Clash games, and Cathy has made a cameo in Neo Geo Battle Coliseum, so SNK never completely forgot about this franchise. Top Hunter: Roddy & Cathy is one of the best hidden gems for the Neo Geo, and is especially worth playing if one can find a friend to play it with.