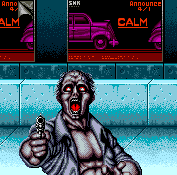 SNK’s Beast Busters series, despite being around since 1989, has never been one of their most popular franchises. In fact, while the company has tried to reboot it twice (for its 10th and 25th anniversary respectively), it has never become anything more than a curiosity. Only the first game is being somewhat remembered, while the others were more or less instantly forgotten, for various reasons such as bad timing or just plain bad luck. These games are for the most part based on a somewhat parodic view of Western horror and action B-movies such as Nightmare City, as seen by a Japanese perspective, complete with weird plot twists and bombastic narration. 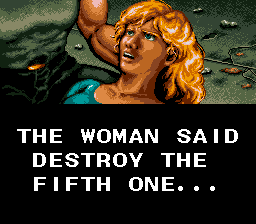 The first game in the series came out for the arcades one year before the Neo-Geo. It was clearly inspired by Taito’s Operation Wolf and SNK’s earlier Mechanized Attack, but far more bizarre and over-the-top. The story: in 1999 strange things are happening in a nondescript town in the middle of the USA where all of the population is seemingly missing. The government then offered a $50,000 bounty to whoever could help solve the mystery, and three mercenaries armed with machine guns and a few grenades came forth. They are tough guy Johnny Justice, soldier Paul Patriot and Chuck Norris look-alike Sammy Stately. Upon setting foot in the town, however, they immediately realize that things are far worse than they imagined: the place is swarming with blue-skinned zombies and other strange creatures. These aren’t “regular” undead though, they are intelligent, able to operate weapons and vehicles… it’s likely that, much like Mechanized Attack‘s cyborgs, the enemies being nominally zombies is just SNK’s excuse to blow people up and get away with it. 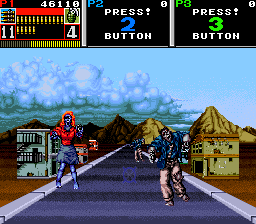 The game’s cabinet is built for three player simultaneous machine gun play, and in fact this is the only way to get to the end of its seven stages. Completing it solo is impossible, unless you want to spend a ton of coins, since the enemies shoot relentlessly and the weapons aren’t powerful enough to clear the screens without getting hit at least once. In fact most of the enemies, being undead, rise again after having been seemingly killed, making an already tough game even needlessly harder. Not to speak of the bosses, since most of them have more than one form. Strangely, enemies on foot are much tougher than the ones driving cars, bikes or other vehicles. 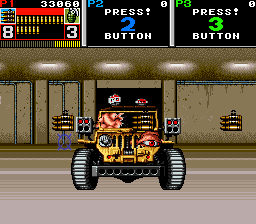 The machine gun’s bullets are limited, but you’ll find so many magazines that it’s very hard to run out of them; much rarer are the special bombs and other bonuses that can be found by destroying elements of the scenery. Every level has one spot where the scrolling stops, a “Warning” sign appears and the players have to face a mid-boss or a huge pack of enemies, after which crates hiding bonuses will fall from the sky. This is a rare occasion to try and find the bombs, first-aid kits or other, much rarer, bonuses, such as bulletproof vests that absorb a certain amount of damage, and a medicine that restores all life. There are different kinds of special bombs (rocket, napalm and electrical), but they all seem to do the same amount of damage. 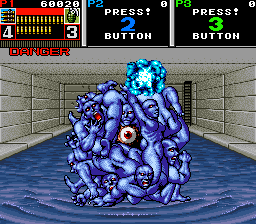 Not even the most disturbing thing in the game.

The first stage, set in a subway complete with cars full of graffiti and empty corridors, is actually fairly creepy… until you get to the bats carrying guns and the boss, a knife-throwing punk that after being hurt turns into a yellow rabid dog for seemingly no reason. Beast Busters never really takes itself seriously, and after a while you’ll want to survive just to see whatever insanity the game throws at you. Some examples: zombie owls carrying zombie American footballers, a river monster with an expressive human face, robots formed from scrap metal that at one point merge into a huge robot, a hostage situation where the seemingly human kidnapper is actually a giant one-eyed creature… The weirdest thing happens in stage 6, where you have to fight a jeep armed with missiles as a mid-boss. After a while, pieces from the car start to fall, just to reveal flesh underneath… it was actually some monster masquerading as an armored jeep for no really explainable reason. And that’s not all: at the end of the stage, its mangled carcass somehow manages to follow you and get on the elevator you’re using to escape! 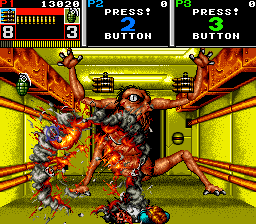 The seventh and final stage is, in the usual cheap quarter-munching fashion, a boss rush, where you have to fight clones of all previous mid-bosses and bosses coming out of glass tubes. It ends with one of the most drawn-out final battles in the history of arcade gaming. At first, it seems that a random mad scientist on some kind of technological throne was the responsible of the zombie epidemic, but after having defeated him he swells and explodes, revealing an one-eyed alien brain that phases in and out of walls shooting missiles. It takes forever to hit and kill it, but the fight still isn’t over: its remains crawl into some kind of giant alien contraption, powering it, and you have to destroy it piece by piece. After that, the game finally ends, but the alien invasion just begun, as a giant spaceship descends from the sky and the alien leader taunts us one last time. SNK in the past had this nasty habit of killing the player characters and/or rendering their whole quest pointless in the ending cinema, as shown in other titles such as Cyber-Lip, Prehistoric Isle and SAR ? Search and Destroy.

Beast Busters, to be honest, did not age too well. It has good, detailed graphics but extremely simple gameplay (just shoot all the time) with no variety in weapons or objectives. The 3-player setup and levels with multiple scrolling directions were novel at the time, but the scaling effects are badly implemented (such as in the third stage, where enemies are seemingly bigger than the houses scrolling in the background). The music is okay but almost can’t be heard under the gunfire, and after the first two stages enemies become almost too much to handle. The only reasons it’s still somewhat remembered today are the plentiful gore and its general comic book-styled silliness, including the cutscenes that never really explain anything of what’s going on. 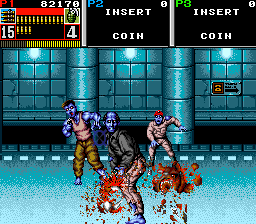 Two years later it was ported to European computers Amiga and Atari ST, the only systems that received a conversion. For obvious reasons, the three-player simultaneous play had to be cut, so Paul Patriot was removed from the game. The graphics make a fair job of imitating the arcade’s aesthetic, but the difficulty was lowered a lot and slowdowns were abundant. The Atari ST also has this extremely cheap cheat (or maybe a programming oversight?) where one can pause the game and still shoot and destroy the unmoving enemies. Some sources also cite a conversion for Commodore 64 that would have been made by Activision in 1990, but outside some mentions in magazines of the time nothing has surfaced, making it likely that it was never actually made. 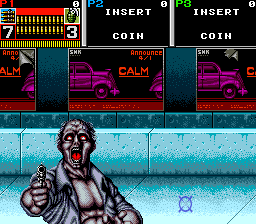 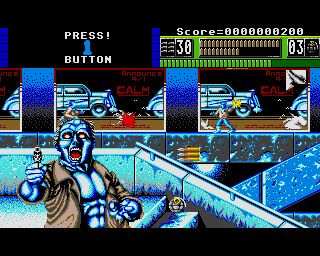 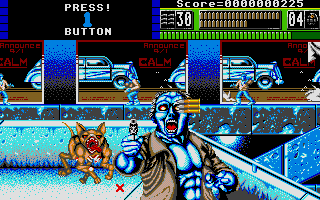