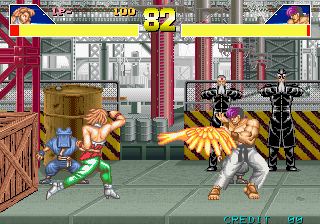 Back when Street Fighter II first came out, things were a lot different. Arcades were filled with Street Fighter cabinets. Whole pages of magazines like EGM and Gamepro were devoted to Champion Edition or Turbo or whatever small upgrade Capcom was releasing. At the same time, publishers everywhere were eager to capitalize on the craze by issuing their own 1-on-1 brawler.

The problem was, how do you make your fighting game stand out? Fatal Fury introduced multiple planes and 2-on-1 battles. Art of Fighting had huge characters and impressive scaling. Mortal Kombat had digitized characters and lots of blood. 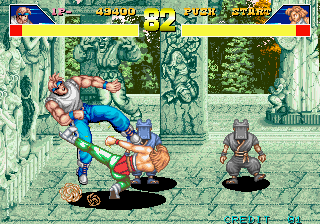 Known as Gouketsuji Ichizoku (or “The Gouketsuji Family”), Power Instinct was Atlus’ entry into the genre. There’s nothing particularly noteworthy about the game mechanics – features such as super bars and tag teams were nabbed from other games – but has features one of the most bizarre cast in any fighting game ever. There’s the evil granny who attacks with dentures. the giant anthropomorphic dog, a half-naked sumo kid, a magical girl straight out of a shoujo anime, a time traveling cyborg chick, an old man who wields a cane, another evil grandma with an huge hairdo, and a scary looking Amazon girl. Unlike Waku Waku 7, which wears its cartoonish goofiness on its shoulder, Power Instinct has an art-style closer to typical Capcom and SNK fighting games, and almost seems to take itself seriously. At least, most of the time.

The story is simple – every 10 years, the Gouketsuji family holds a tournament to determine who will rule the clan. Family members from all over the globe come to participate and beat each other up to claim the title.

Since the beginning, the illustrator for the series has been noted artist Range Murata. Although he was relatively unknown when the first Power Instinct hit the market, he’s since found quite a bit of fame. He’s done artwork for some Psikyo games, such as the mahjong game Hot Gimmick, as well as the Saturn strategy game Wachenröder and the Sammy stealth game Spy Fiction. He also did the character designs for the animes Blue Submarine No. 6 and Last Exile.

Power Instinct was relatively popular in Japan, although it floundered everywhere else. Perhaps it was because it was bit too odd. Or perhaps it was just because the strange, twitchy gameplay just didn’t feel right. The first game had home releases for the Genesis and Super Nintendo, but was otherwise relegated to obscure arcade releases. The most recent game in the series, Matrimelee, was released for the Neo Geo and was ported to the PlayStation 2 in 2006. Take note that there several different spellings of “Gouketsuji”, including “Goketuji”. The game tends to use different variations, because they’re just different ways to transliterate the same word.

The American fighting guy. Looks almost exactly like Axel from Streets of Rage 2 in most of the games, but looks cooler in Matrimelee (pictured).

Every fighting game series needs a ninja somewhere along the line, and Saizo fills that role nicely. He wears a scary mask in earlier games.

A Buddhist monk, looks kind of like Krillen from Dragon Ball Z.

The main female fighter. Looks pretty dorky in the original games, but gets a spiffy hairdo in Matrimelee.

A huge female wrestler who wields a whip. Looks kinda like that one scary woman from Strip Fighter II.

The frightening grandma fighter, and erstwhile mascot of Power Instinct.

Oume’s twin (i.e. palette swap). Can temporarily transform into a younger version of herself.

The super-old matriarch of the Goketsuji clan. Has a fantastically large hairdo.

Power Instinct has no less than three old ladies, so it seems you need one old man to balance it out.

A magical girl who looks similar to Card Captor Sakura. Likes to cosplay and attract creepy old guys. Star of her own action game as well. Sometimes also called Kurara.

Like most magical girls, Clara can turn into an older version of herself. Super Clara is, for some reason, a skater in a bikini bottom.

A tiny little brat who wears practically nothing. Voted the worst fighting game character ever in the HG101 forums. Put some pants on, son!

Kinta’s super power form is this huge dog, who can attack by digging up bones in the ground.

An Arabian fighter who wields the power of the genie.

Chuck is a homage to Capcom’s Dan Hibiki, who in turn is a combination of Ryo and Robert from Art of Fighting. In other words, a copy of a copy.

The little assistants that usually jump around the background are playable characters in Goketsuji Legends. These tricksters should look familiar to Samurai Shodown fans.

Punk #1 from Matrimelee. Brother of Butaro.

Punk #2 from Matrimelee. Brother of Shintaro.

Hikaru is actually a girl dressed as a guy. She wields a mean cane.

A criminal mastermind who attacks mostly with his legs. Looks kinda like Gendo Ikari from Neon Genesis Evangelion.

The cute little girl boss character from Matrimelee. Seems to wield a box filled with unimaginable horrors. Also has buzzsaws in her shoes.

Thanks to Wally Domey, who wrote the history FAQ