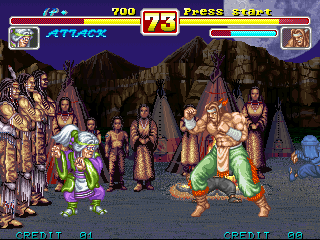 Power Instinct 2 improves greatly on the fighting engine of the original, making for a game that’s far more playable. There are also several new characters, including the magical girl Clara, and the weird little kid Kinta. Both have super moves which allow them to transform into alternate characters – Clara turns into “Super Clara”, a sexy adult version of herself, and Kinta turns into Pooch, a huge, walking dog. Taking a page from Super Street Fighter II, there are now power bars which allow you to charge up for super attacks. Whenever you fill up your power bar, your character emits a Dragon Ball Z-like power charge which renders them temporarily invincible. 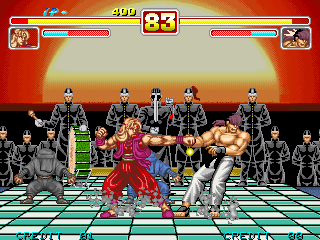 Power Instinct 2 is also one of the first fighting games to have a vocal soundtrack. Most stages have their own theme songs, crossing a variety of genres like folk, hard rock and J-pop. There are plenty of small details that make Power Instinct 2 stand out a little more. The pre-battle screen has a variety of animations, ranging from lightning strikes to blazing fires to hearts floating in the background. The winner of each match gets to doodle on the loser’s face, leading to some amusing post-battle portraits. Even the win/lose quotes are customized for the characters fighting each other. It’s the type of polish you usually see in SNK games, and it’s good to see Atlus giving their own series the same care. The only real problem is the insane difficulty level. The enemy AI blocks, retreats from your attacks, and otherwise demolishes you completely. This is Art of Fighting 2 level of insanity, so the only real way to enjoy the game is with two players.

Power Instinct 2 was also ported to the PlayStation with the subtitle Chotto Dake Saikyou Densetsu (“A Slighty More Powerful Legend”). It hacks out some animation and background details, and adds some load times, which is par for the course for a PlayStation port. However, the transformations are accompanied by a three second pause, which gets really annoying. Otherwise, it’s a fairly decent port, and is quite a bit better than Capcom’s early PlayStation offerings. There’s also a variation of the tag team mode found in Power Instinct Legends, although you’re restricted from choosing from two characters. This release also features a fully arranged soundtrack, so the vocals sound much better than the arcade version.