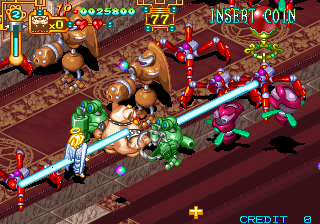 The magical girl Clara was so popular that she ended up starring in her own game, dubbed “Prikura Daisakusen”. (“Prikura” is a contraction for “Princess Clara”, but it’s also the name of those photo booths which are very popular with young girls in Japan. This, in turn, is short for “print club”, and was invented jointly by Sega and Atlus. “Daisakusen” means “battle plan”.) It’s an cutesy action/shooter, similar to games like Commando or Mercs, except from the isometric viewpoint. You can choose from one of three characters – Clara, her partner Kirara, and a giant cat named Grey, who is actually a cursed prince.

Each character has two attacks – a standard projectile attack and a melee weapon. You’re also accompanied by a familiar throughout the entire game. At first, it’s just a walking egg, but as you progress through the game, it hatches and evolves into different forms. What kind of create you get is determined by whether you prefer ranged or melee attacks. Considering that this is a short-lived arcade game that can be beaten in about twenty minutes, this does add a little bit of replay value. Each of the characters also has some kind of special form they can turn into – Clara can turn into the bikini-clad skater from the fighting games, and the two other characters have unique forms as well.

There are plenty of issues that keep Purikura Daisakusen from greatness. Naturally, the strange angle can make dodging enemy fire rather awkward. Your primary weapon is pretty weak, even when powered up. The screen is constantly filled to the brim with enemies that take far too many hits to kill, and it’s nearly impossible to take them all down. Even your bombs are underpowered. Additionally, the game just moves slowly, and lacks any of the intensity you expect from an action game. 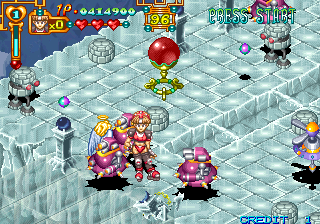 Purikura Daisakusen runs on Sega’s ST-V system (much like Groove on Fight) and was ported almost perfectly to the Saturn. This version includes a gallery mode which features some pictures and narration from the characters, and first prints include a calender with the packaging. Since you’re limited in credits, it’s barely playable unless you stick it on the lowest difficulty level, in which case it can be somewhat enjoyable. The extra controls on the Saturn controller also let you map the “dodge” function to an extra button, which makes gameplay a little bit easier. (The arcade version requires you to double-tap in a direction, which isn’t exactly intuitive.)