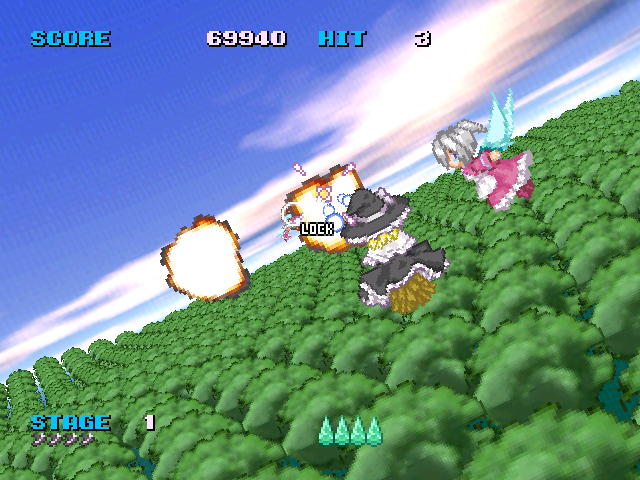 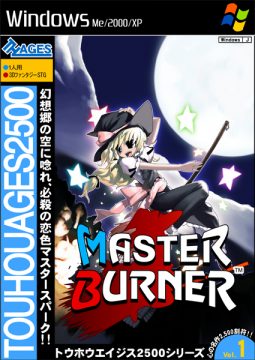 Master Burner is more than just an After Burner clone – in some ways, it’s almost a little bit better. Created by DNA Softwares and released in a packaging spoofing the Sega Ages 2500 line (dubbed “Touhou Ages” here), Master Burner replaces the generic F-14 Fighting Falcon with Marisa Kirisame, the yellow haired witch from a variety of Touhou shooters. Many of the landscapes are similar, although some take place in unique locales like libraries. All of the enemies have been replaced with fairies and little comets that have that goofy little grimacing face you see on Japanese message boards. And all of the smoke trails have been replaced with colorful streams of transparent stars. 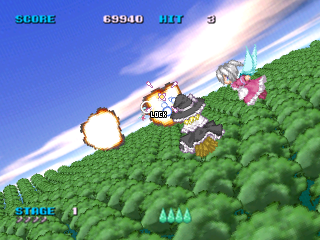 Things seem to control just a little bit differently – the controls are somewhat twitchier, and the landscape seems to zoom by slightly faster than it did in After Burner. While you’ll still rely heavily on missiles, the standard Vulcan cannon is far more useful than it ever was before. Your missile supply is still limited, although it partially recharges after each stage and is fully replenished every few stages by Reimu Hakurei, one of the stars from several Touhou games. Once again there are bonus stages where you need to fly between different obstacles while shooting static objects on the ground. However, there are now boss battles with various other Touhou characters, that play out similarly to the end-of-level encounters found in Space Harrier.

The graphics are almost spot-on replications of the style of the original After Burner arcade game, although some of the spritework looks a bit off by comparison. All of the music is modified versions of the FM tunes from the arcade game, usually changing the main melody, so it feels fresh while still staying incredibly faithful. There are a few arrangements from the actual Touhou shooters too, which are played during boss battles. 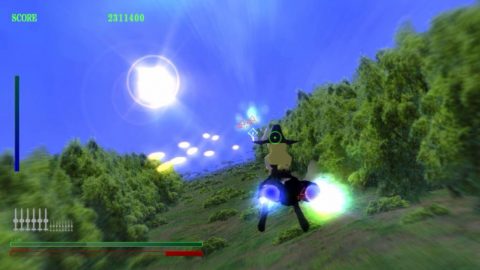 In 2009, three developers – Shooting Area, Aquaelie, Hexaflange – came together to create Master Burner Climax. Named and based loosely on After Burner Climax, this entry is entirely in 3D. However, it is much less of a blatant clone than the original Master Burner.

Links:
DNA Software – Master Burner Official website, includes a demo download that features a single stage repeated over and over, and no music.