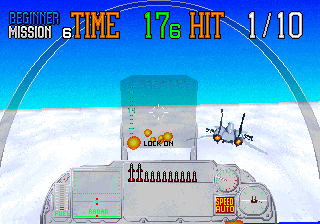 Despite the name change, G-LOC (which stands for “Gravity-induced Loss of Consciousness”) is pretty obviously part of the After Burner series. However, now each level has a certain goal, usually being “shoot down X number of enemies”. You’re also timed, and clearing each stage will add some extra seconds to the clock. You can die as often as you want, but this naturally wastes a bit of precious time. The graphics have improved substantially, as the landscape is now comprised of scrolling textures rather than dozens of scaling sprites pasted together. The improvements are due to running on Sega’s System Y board, which also powered Galaxy Force and Power Drift.

The viewpoint has been changed to a first-person cockpit view, although it zooms out whenever an enemy is on your tail. The game now focuses less on dodging enemy fire and more on shooting enemy planes that saunter up behind you. You have greater control over your plane’s rotation, so you can also fly completely upside down. There are also ground missions, where you fly low to the ground and dodge enemy fire as you blow up installations. There’s now a “damage” meter, so you can survive a bit of gunfire or bumps against other fighters, but getting hit by missiles or slamming into bad guys will still kill you instantly. At the end of the mission, you also need to land successfully on the aircraft carrier. Unfortunately, the game is much slower, both due to its rather lackadaisical pacing and sluggish controls. While the original After Burners were a little too insanely fast, G-LOC is more relaxed almost to the point of sedation.

But fast paced action wasn’t necessarily G-LOC‘s goal to begin with. In the arcades, certain cabinets (dubbed the R360) featured a seat that could physically turn back and forth and even upside down, greatly enhancing the immersion. A safety bar keeps the player in place (like amusement park rides) and an emergency stop button would turn the cockpit to its upright position. There’s even an option to just sit back and let the game play itself, making G-LOC feel more like a ride. Naturally, this was an incredibly expensive machine, so it didn’t exactly see widespread distribution in arcades. 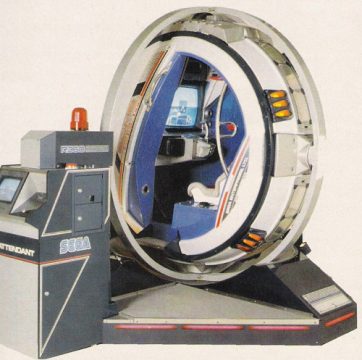 Since this gimmick was the big draw for G-LOC, all of it was lost in the home translations, which weren’t even powerful enough to recreate the game itself. The Genesis version, ported by Probe Software, can’t handle all of the graphics, but most of the gameplay still holds up. It’s a longer but easier game, which makes it less frustrating too. You can use points to restock weapons or upgrade your equipment, since this doesn’t happen automatically. There’s a bit of extra window dressing, like the mission maps between levels and the wingman who issues your orders. Also, some levels alternate between first- and third-person views. The third-person stages are a bit strange, since the horizon doesn’t rotate and your fighter seems to move along a parabola.

The Sega Master System version completely alters all of the levels. Half of the screen is taken up by a HUD and the landscapes are now rolling colors, but while the game looks worse than the SMS After Burner it plays a little bit better. In addition to the time limit, you can only die a certain number of times before needing to continue. Additionally, since the after burners are gone, the chase sequences – done in third-person like the Genesis version – are simple annoying sections where you need to dodge enemy fire for a certain period of time. Sega also added strange boss fights to certain stages. While the original After Burner titles have some grasp on reality, these bosses look like things you’d fight in an outerspace shoot-em-up and feel really out of place.

The Game Gear version (available on the 3DS Virtual Console) goes off in a completely different direction. You’re given a choice between several missions, with the usual goals of blowing up a certain number of planes or sinking a certain number of tankers. Depending on how well you do, you’ll get points which can be used to upgrade your plane. You actually control a cursor with only limited control over your plane, making it feel like a static shooting gallery. The graphics are worse than the SMS version, and it doesn’t run smoothly either. Your fuel meter also acts as a life gauge, and when you get blown up it’s game over. An interesting experiment.

The European computer ports, published by US Gold, are all based on the arcade version. The Amiga and ST ports look much worse than the Genesis version, since the landscape is completely barren, but technically they play alright, and the plane controls well with the mouse.

The other versions, on 8-bit computers, are wretched – they’re slow, choppy and ugly. The Commodore 64 port was so bad that British magazine Zzap! 64 surmised that G-LOC actually stood for “Great Load Of Crap”.

An arcade perfect port (minus the cabinet, obviously) was released as part of the Sega Ages line on the Nintendo Switch in 2020. 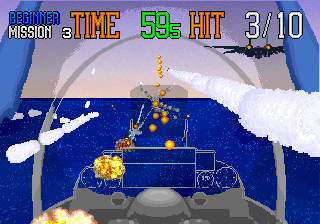 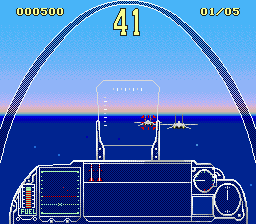 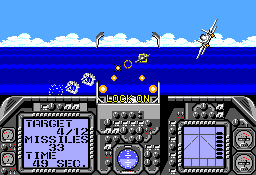 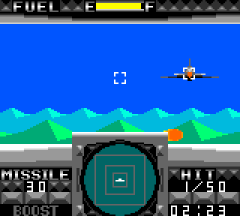