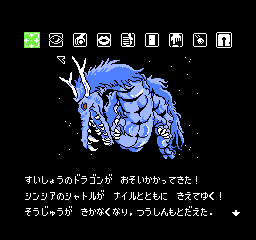 Hugh and his girlfriend Cynthia are adventuring through space, when they’re suddenly attacked by a crystal dragon. Hugh is saved by a strange woman, while Cynthia is kidnapped. In this adventure game, you control Hugh to not only discover the mystery of the dragon, but also save your girlfriend. The designs were provided by Gen Sato (Mobile Suit Gundam), and the studio Nippon Sunrise even provided animated footage for a TV commercial. Unlike most other FDS adventure games, which use a text command-based system, here you pick icons from the top of the screen and interact with the environment. Still, from a design standpoint, it’s rooted in early 80s text adventures. There’s little direction, sparse text, and barely any sound, plus it’s on the short side. 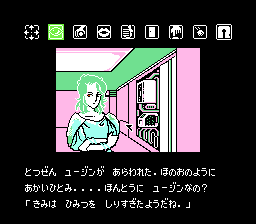 Suishou no Dragon is remembered for a tip in Family Computer Magazine, which said you could play a game of strip rocks-paper-scissors with Cynthia, complete with a doctored image. This was false, but reportedly still caused a sales spike. This scene was later referenced in the credits of Hyperdimesion Neptunia V.