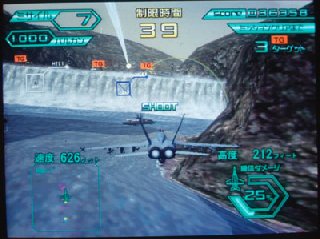 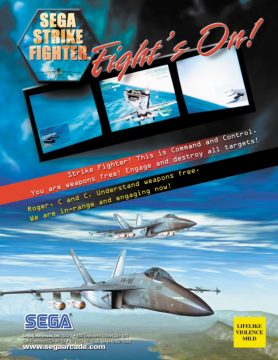 Released only in the arcades on the Naomi hardware, Sega Strike Fighter is only listed here by virtue of including “Strike Fighter” in its title. It actually bears little resemblance in theme to the older After Burner games, and instead plays much closer to a game like Air Combat – which is to say, slower and slightly more realistic. The game is set up similarly to G-LOC, in that you have a time limit to destroy a certain number of bad guys before you can move on. You can choose your missions as well. Once again there is a a life bar, but it’s all too easy to turn upside down, bang into the ground and severely damage your hi-tech fighter.

In addition to the standard controls, there’s also a pedal that lets your fighter strafe, although it’s still rather hard to keep your plane under control. Sega Strike Fighter‘s big gimmick is the three screen sit-down cabinet, which creates a greater sense of immersion. It’s an okay game, but taken in the context of After Burner, it’s clear that the apple has fallen pretty far from the tree. (Also excuse the pictures, which were all stolen from Killer List of Video Games.)