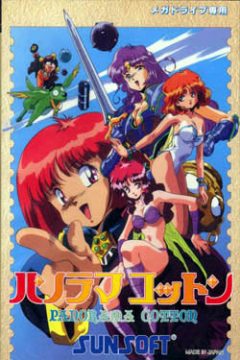 Panorama Cotton is one of the most technically impressive games on the Mega Drive – even Alien Soldier and The Adventures of Batman and Robin can’t quite measure up to this. The third Cotton outing moves to 3D, similar to Galaxy Force II, though it’s orders of magnitude better than that game’s anemic Genesis port. 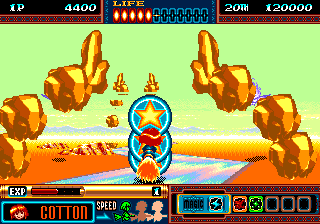 It’s a gorgeous game right from the get-go, as the first level begins with Cotton flying through the sky and slowing descending to fly along the ground. Along the earth is a river which zigs and zags with glowing pastel colors, complete with rock formations you can fly under to grab bonus points. Near the middle of the stage, the ground gives out to reveal a canyon, and you’ll fly down and straight into a waterfall, through a long corridor with several branching routes, before culminating in a boss fight. The subsequent levels are just as varied, often with several sections, each as gorgeously detailed as the last. You don’t even fly forward in all of them – in a few areas, you fly horizontally, or even straight upwards or downwards. The visual techniques, especially when transitioning section to section, look incredible. Artistically, it’s also gorgeous, using colors across the spectrum and featuring oddball bosses, like one that can be described as a rotund living castle riding a unicycle.

Of course, the Genesis doesn’t have any hardware scaling effects, which is part of what makes the game so fascinating, but it does mean that the scrolling can get a little choppy at points. It runs at an inconsistent speed, sprinting along nicely if there’s no enemies on screen but chugging when there’s too many at once. 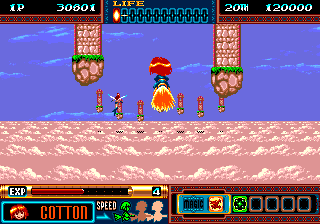 And there are a lot of enemies on the screen, many consisting of multiple sprites. It’s sometimes hard to weave your way through everything, and avoiding damage in some areas is practically impossible unless you’ve memorized the level and know the maneuvers beforehand. To its credit, you have a generous life meter, especially on the easiest difficulty setting.

The weaponry system works just like the original Cotton, with an experience gauge to power your main weapon, and a stock of spells obtained by grabbing colored crystals. You can also change your speed, which not only determines how fast Cotton moves, but the speed of the level too. You’re granted a generous score bonus if you can beat a level quickly enough. There’s a separate score attack mode, along with the ability to play as Silk, if you complete the game with a high enough score. 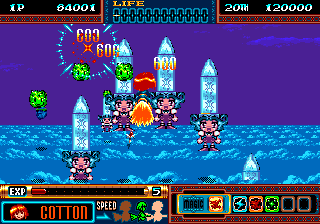 Panorama Cotton was published by Sunsoft near the end of the Mega Drive’s life span, only in Japan, and thus the price for a secondhand copy is incredibly high. Certain editions also come with a tea cup, which makes the game even more expensive.