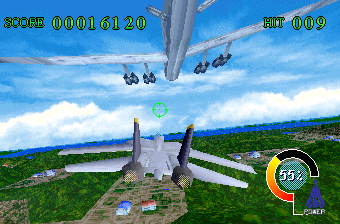 Once again, Sega masks its lineage by giving a completely new name to what’s obviously a new installment in the After Burner series. Sky Target is the first fully polygonal game in the series, courtesy of the Model 2 hardware. While the Vulcan/lock-on missile set up is the same, the pace is a bit slower, and the handling is more comparable to Star Fox 64. There are four different planes to pick from: the F-14D, the RAFALE M, the F-16C, and the F-15S/MTD. Each has slightly different movement capabilities and missile loadouts. Unfortunately the throttle controls, from previous games, have been removed.

After the first few levels the game branches off and lets you take different paths to the final stage. There are only a few alternate stages, and there are only 12 levels in total, but it does add to the replayablity. At the end of each stage you’ll encounter some kind of boss – they range from gigantic planes to deadly blimps. These make it feel a bit more like a Panzer Dragoon game, especially with the multiple weak spots you need to hit to take them down. While these battles are unlike what you’d find in most of the other After Burner titles, they’re less silly than the foes in the Master System version of G-LOC. 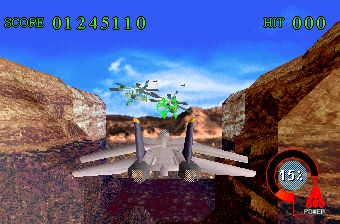 You only get one life per credit, although now your plane has a lifebar and can absorb a fair amount of damage. Unfortunately the music is the worst kind of generic butt rock, all done with very cheesy synth, though the composers tossed in a (rather limp) arrangement of the After Burner theme song.

Beyond the arcade release, Sky Target was also ported to the Saturn and Windows PCs. The Windows version is a faithful port, but the Saturn version (pictured) isn’t quite as good looking. The Saturn version also has a “Ranking Mode”, which lets you replay any missions you’ve beaten in “Arcade Mode” in order to get high scores.

Sky Target isn’t bad, but much like earlier efforts, the lack of speed makes the action feel slightly dull. It doesn’t help that the Saturn port runs at an inconsistent speed, constantly shifting gears depending on the action. Plus, the textures are painfully low-res and the draw-in is quite noticeable. The missile trails also don’t look right. On some level, it’s actually more playable since you can see what’s going on, but it’s also not quite as fun. 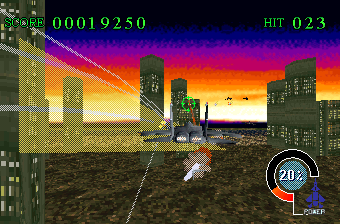 The manual also elucidates on the silly plot, where you play as a pilot from Mad Dog, a secret military organization, fighting against the Deldine Corporation, which has stolen a top-secret weapon from the military.