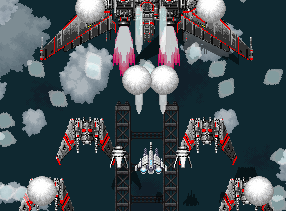 Kaikan is a freeware doujin shoot-em-up, created after hours by two hobbyists in S.T.G. Creator – a toolset of predefined scripts with a graphical interface. It has no setting nor a story to go with it. The developers’ website has a charmingly simple HTML aesthetic, characteristic of the 90s, and contains their short bios (they don’t take themselves very seriously). Sprites, backgrounds, sounds, music and even fonts were not made specifically for the project. The developers borrowed those freely licensed assets from websites of like-minded enthusiasts. You wouldn’t have suspected any of that just from playing the game though – Kaikan is far from amateurish, if not in production values, then definitely so in design. It is a veritable passion project, created with not only with care, but also with competence. Zakichi and Gomazou of Kigekiyahonpo are mindful fans of the genre and know what does and what doesn’t make a fun shoot-’em-up. 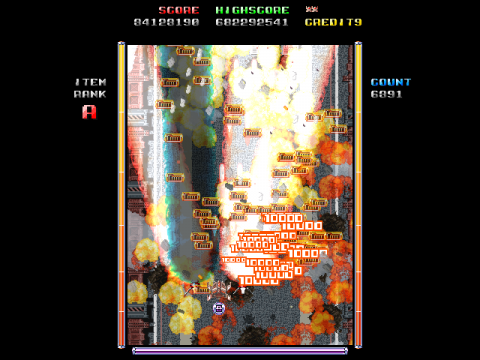 Despite its sound and graphical assets coming from different sources, Kaikan is a coherent, homogeneous package. The developers made the best with what resources they had, picking a matching set of sprites and a consistent soundtrack, so nothing stands out from the rest. Only in one section, where an enemy model is zoomed in on with unchanged resolution, can it be seen that they actually had limited control over the graphics. What the developers could influence – the overall visual design – shows clever insight. Players will appreciate how color contrast and speed differentials make it easy to distinguish pickups from threats, despite a rapid onslaught of visual clutter. An important detail, as even in more professional titles, like Touhou, you might occasionally experience perceptual slips with prolonged play. You deliberately fly into a bullet, because your tired and overwhelmed visual system deemed it desirable. This never happens in Kaikan. 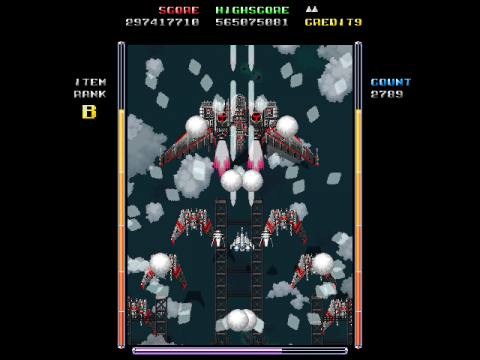 As for the art assets themselves, they are nothing exceptional. Some sprites have nice details and some tunes are quite catchy (they appropriately mark pivotal moments, like boss fights and the last stage entrance), but none of them will likely leave a lasting impression. Particularly, sounds are generic and unsatisfying, especially the muffled explosions. Still, all those elements are at least functional, if not more than that. A Kaikan cabinet certainly wouldn’t look out of place in an arcade hall. In any case, the greatest strength of this hectic shoot-’em-up is the thoughtful design of its mechanics, and those are more deserving of being discussed. 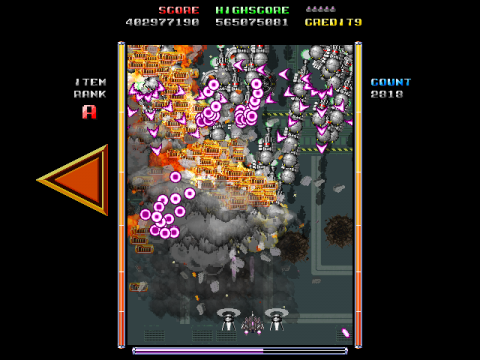 The gameplay sits somewhere between a regular vertical shoot-’em-up and a bullet hell (danmaku). There is quite a bit of variety across stages: you won’t be just dodging dots, but also various beams, missiles and waves of suicidal popcorn (small, numerous enemies). You’ll speed along a highway and cruise through a maze of stationary revolving lasers. Special attention was devoted to boss fights. They don’t just throw regular routines of unaimed + aimed bullet barrages at you from the top. They may spin, circle around your ship or pull it inside an enclosed space with a tractor beam. Some patterns are meant to be beaten by not moving or not shooting at the right time. This creativity went too far only in a few cases. Some True Last Boss’ attacks have abusable safespots and stage 3 boss has a particularly nasty pattern which fills the screen with stationary bullets and then launches each of them in a random direction. The problem isn’t that this attack is hard, but that it is unlearnable. Human brains only have so much attention capacity. The current world record holder’s advice here is: “Hope you don’t have bad luck.” (link). 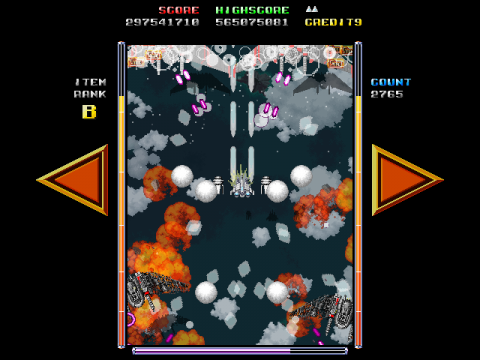 Scoring system revolves around medals dropped by fallen enemies. Collecting them does three things: raises the item rank, fills the gauge and raises the medal count. Item rank starts at G, where each medal is worth a mere 10 points, but the next rank multiplies that by 5 and another by 2 – a pattern repeating until each medal is worth 10000 at maximum rank A. Item rank, unlike the two other counters, must be raised in an unbroken chain: getting hit or failing to collect a medal brings it back to G. The gauge, when full, may be kept as an autoshield or spent as a bomb – this creates a whirlpool that kills regular enemies on contact, making them drop extra medals, worth as much as those from a higher rank (so 50000 when the rank is A). This whirlpool only damages bosses, but it turns their bullets into those same upranked medals. Speed-killing certain bigger enemies spawns waves of popcorn that make good targets for a bomb and a score boost – at the cost of protection. Medal count is a multiplier that modifies scores awarded for collecting hidden shields (uncovered by shooting at them) and killing bosses. Each boss’ bullets can be morphed into regular medals with two destructible parts or, at the moment of death, into star-shaped pickups, worth as much as medals two ranks higher of the current one (so x10). 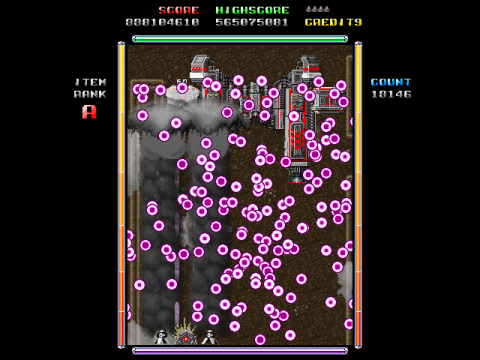 All this would be pretty standard and mundane if it wasn’t for the main game mechanic. Regular medals (outside of boss fights and bombing) are drawn to your ship and autocollected, but only when you’re not shooting. When you are, they keep falling to the edge of the screen, threatening to reset the item rank. Autocollection must be used frequently and timed well if the chain is to be maintained, as it is impossible to grab everything manually. With this original twist on the gameplay, four orders of magnitude in item ranks, tying the bomb with the autoshield and high potential for milking the bosses, the scoring system has all the key elements. It is high-risk, high-payoff and multi-layered, while being simple (not the same as easy) to execute. As a consequence, this also makes the high-level game very methodical, with players tending to find and keep using an optimal strategy, carefully timing each position and autocollection. Scoring is central for the gameplay and trying for survival alone largely defeats the whole purpose. It is probably also harder without the extends gained at every 100m + x*200m points. 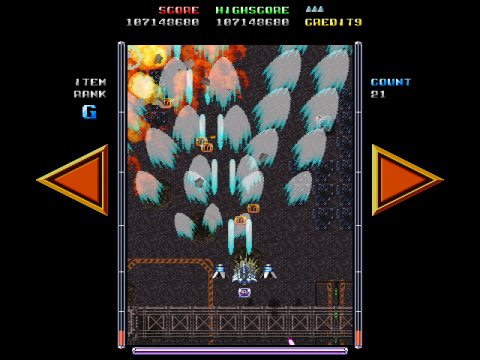 That is not to say that Kaikan will only appeal to expert players. Newcomers to the genre may also be hooked by progressively harder challenges: beating the game on the provided 10 credits (which unlocks the blast ship), beating the stage 5 boss without continuing (which makes the True Final Boss appear and winning that fight, even by continuing, unlocks the ball ship), 1cc’ing the whole run. The gameplay gives a lot of opportunities for small improvements, so the personal high scores can be beaten frequently and consistently, which is satisfying and motivating. 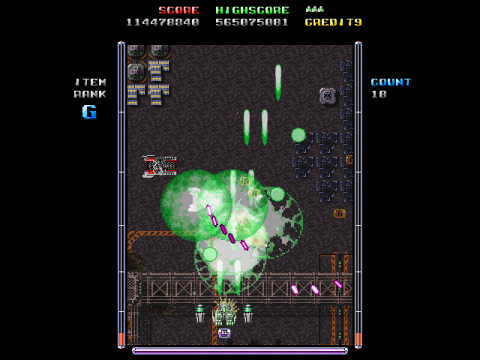 A true variety in the ship types also helps to keep the game interesting for longer. Each has two attacks, the other being a focused mode, which also slows the movement down and shows the hitbox. What’s remarkable is that each of the six ships has its use case and excels in it. Homing type is a good beginner ship, but loses its appeal when a players knows the stages well. Fire type covers the whole screen with revolving beams, but it’s slow and has a low damage output. Napalm type does great damage, but to a smaller area and its shot lingers for a while, interfering with medal collection – its great speed must be utilized well to succeed. Blast type is a ship for expert players, amplifying napalm’s strengths and weaknesses. Wideshot type is a perfect middle ground between screen coverage and speed. Ball type is surrounded by bullet-cancelling… balls – great for survival, horrible for scoring. 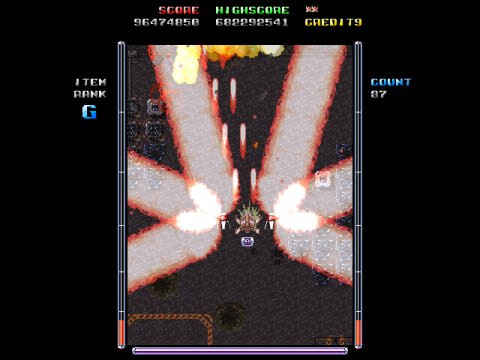 Kaikan may be original, but of course it was influenced by other titles. Most obvious of them is Battle Garegga, with which Kaikan shares graphical (similar font, explosion animations) and mechanical (some analogous enemy types, scoring by chain-collecting medals) elements. Especially the stage 4 boss is very reminiscent of Battle Garegga’s Black Heart, both in appearance and attack patterns. Smaller details can be traced back to Fire Shark (“human arrow” animation, fire ship) or Zanac (ball ship). Other mechanics (boss fight scoring, pickups uncoverable by shooting) had appeared in many games, so a direct lineage cannot be drawn. 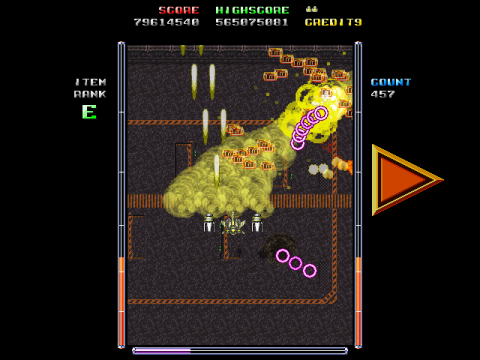 As a final note, the game is not without bugs and grievances. One involves replays – if you don’t exit them properly, your high score and unlocks will be reverted to the state from that replay. Other is much more annoying as it interferes with the gameplay: sometimes, when the ship model is at the very bottom of the screen and a bunch of medals are autocollected, the item rank is lost as if some of them dropped. A lack of stage practice is also a shame, as it makes learning the game needlessly tedious: final level takes quite a few tries before a safe route is found and each attempt must involve everything that leads up to it. At least the bosses can be practiced by leaving them alive and letting their patterns repeat. With a bit of patience though, Kaikan will prove to be a fun and rewarding experience.

Links:
Developers’ website (Japanese) – contains a free download of Kaikan
S.T.G Creator (aka Shooting Game Builder) (Japanese) – a tool used to develop Kaikan
Probably the current world record run – if anyone scored higher, (s)he didn’t brag about it on the Internet
Superplay with scoring tips – from the same player