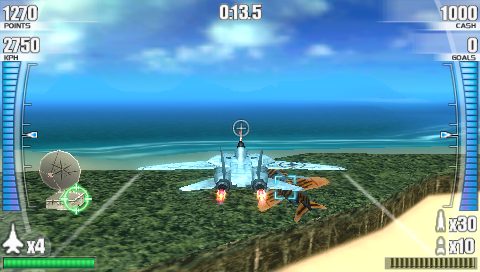 This PSP title is often mistaken for a port of After Burner Climax, but it’s actually a completely different game developed by Planet Moon Studios, previously known for goofy shooters like Giants: Citizen Kabuto and Armed and Dangerous. It’s also technically the first After Burner title developed specifically for a home audience.

Instead of a 21-stage marathon, After Burner Black Falcon is broken down into a huge number of short missions lasting roughly five minutes each, where the goal is simply to get to the end while destroying as much stuff as possible along the way. The graphics aren’t particularly special, but they move fast and there’s plenty of variety. Fortunately, the mechanics feel just about spot on, with quick movement and smooth controls. The soundtrack is supplied by American rock group Trans Am, most of which lacks the appeal of the old music.

In addition to the standard Vulcan cannons and heat-seeking missiles, you also have an air-toground cannon to destroy land based targets. If you destroy multiple enemies simultaneously you’ll get a combo bonus, which spawns a bonus crate containing health or ammo replenishments. You also execute a 360 roll by pressing the triangle button, which is practically required to dodge projectiles. It takes some getting used to, because it’s hard to see incoming missiles with all of the action going on, and trying to dodge bullets is unnecessarily difficult. Although you have a damage meter and multiple lives per stage, it’s easy to burn through all of that if you’re not paying attention. If it becomes too frustrating, you can always set the game to Easy, because you can take plenty of hits.

There are usually multiple objectives in each stage, which involve killing a certain number of enemies or completing the missions quickly. Higher scores will give you more cash to buy new aircraft and upgrade your weapons. There are tons of licensed craft from Northrop Grumman, Lockheed Martin and Boeing, and unlike the extra ships in the Sega Ages After Burner, there are huge differences in their power, speed and handling.

The mission structure and customization add greatly to the replay value, and allows for convenient quick play, since the missions are pretty short. Unfortunately, the landscapes usually repeat at least twice over the course of the level – some kind of variety would’ve been nice. Still, the package is pretty good overall, considering it’s taken an inherently shallow game and given it some lasting value.