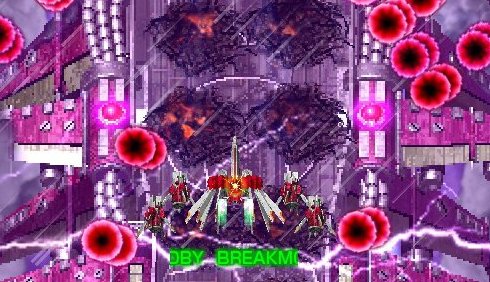 Indie/doujin bullet hell shoot-em-ups are a dime a dozen nowadays, but few are as good or as fun to the average shoot-em-up fan as the best works of Cave, Raizing, and Toaplan. There’s something about these games that make even the thickest of bullet patterns or the hardest of “True Last Boss” fights fun to blaze through, even for an unskilled player – a quality which a lot of their imitators lack. Many hardcore fans of the genre once considered the arcade to be the only acceptable home for games of this kind, a game came around in 2011 which changed the minds of many of these people. That game was Crimzon Clover. Crimzon Clover absolutely rocks.

Crimzon Clover looks, sounds, and plays like a hidden gem from Cave’s middle years – the era of Dodonpachi  Daifukkatsu and Ketsui – before they began putting moe characters and overly complex scoring mechanics into their games – and with a few mechanics from Taito’s Ray series peppered in for good measure. The player begins each playthrough by choosing a difficulty setting, a mode (more on those later), and one of three ships types, with the only difference between them being their shot width and speed. Type I has average shot width and low speed; Type II has variable shot width due to the inclusion of Gradius-esque Options and average speed; Type III has minimum shot width and high speed; and the unlockable Type Z strikes an ideal balance between the two stats, thus making it the ship of choice for those who dare tackle the game’s highest difficulty levels. 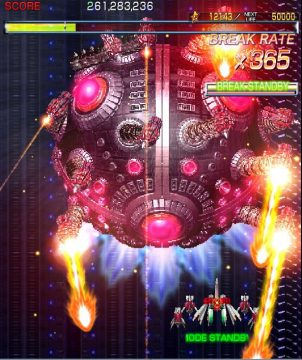 Crimzon Clover‘s gameplay is based around a lock-on shot which works similarly to the one featured in RayStorm and RayCrisis (bonus multipliers and all), and the BREAK system, the latter of which acts both as the game’s main scoring mechanic and as a bomb stock. By damaging and destroying enemies, canceling their on-screen bullets, and collecting the star items they drop, you fill up your BREAK gauge, which can be used to either trigger the BREAK and DOUBLE BREAK modes – which double and quadruple both your firepower and your scoring potential, respectively – or to set off a screen-clearing bomb, which unlike the ones in most danmaku shoot-em-ups, can also convert on-screen shots into star items.

The way this system works, plus the lack of a Rank counter in most game modes, may lead first-time players to believe that reckless bombing is allowed, maybe even encouraged, in Crimzon Clover, but there’s a big catch to it: the gauge requirement for setting off a bomb grows each time one is used, being very low at the beginning of a playthrough and rapidly growing to a full two-thirds of the meter if the player doesn’t pay attention. This makes bombing essential to survival only in Boost Mode, an upgraded version of the original release’s Simple Mode included in all World Ignition releases. While Simple Mode replaced the BREAK system from other modes with a Rank counter that rewards players for putting their skills to the test, Boost Mode reworks it by making BREAK last for the duration the Rank counter, which means that the longer you survive in BREAK (which is now triggered automatically by reaching max gauge), the harder the game will get, with the only ways to lower your rank being bombing or losing a life; doing either will kick you out of BREAK, thus lowering the difficulty level but also taking away the boosts in score and firepower it gives you. Despite all of these little intricacies, Crimzon Clover is, as a whole, surprisingly beginner-friendly, especially due to the inclusion of a Novice difficulty setting, which limits your choice of game modes but offers a level of challenge ideal for newbies in the genre, and/or for those more accustomed to older, slower-paced examples of the genre. 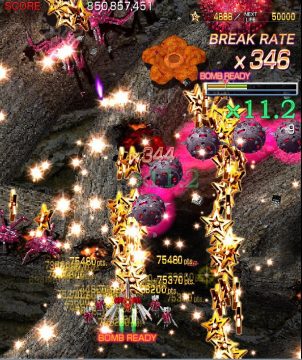 Crimzon Clover‘s presentation feels like it was ripped directly from Cave shooters, particularly the look of the later Dodonpachi  games, from the era when Cave switched to higher res 480p graphics. It has a distinct, colorful visual style that sets it apart from those, though, most notably in the form of the almost candy-colored ships. The action is accompanied with a rich synth score created by doujin composer potechi. It’s only on later stages, however, that the game’s graphical style truly shines, with all sorts of transparency and parallax scrolling effects being cleverly used to pull off some incredible visuals. Stage 3, a massive underground cave/forest filled to the brim with hordes of spider-like robots and huge flowers that bloom as you fly over them, truly feels like a living, breathing world filled with mysteries to uncover. Meanwhile, Stage 4’s high-flying raid over a faraway metropolis is clearly inspired by Compile’s Genesis classic MUSHA, with its fast and furious setpiece-based action, and a dash of RayForce‘s incredible graphics and visual storytelling thrown into the mix.

It’s clear that the game has pretty high production values for a doujin title, and its soundtrack is no exception, being a large collection of high-quality synth-rock and electronica pieces which fit the game perfectly (the boss themes, in particular are fantastic, and only get more rocking as you advance in the game). Furthermore, if the standard soundtracks for Original and Unlimited modes weren’t enough, the Steam and GOG releases also offer a brand-new alternative soundtrack as DLC. It sounds like something mid-90s Zuntata would have turned out. Composed by Gryzor87, known for his work on Locomalito games, like Hydorah and Maldita Castilla, it’s pretty great, though the jazzy feeling doesn’t always match the intensity of the game.

Crimzon Clover is one of the best doujin/indie shoot-em-ups out there. Its gameplay, aesthetics, and general feel are on par with genre classics that even modern masterpieces such as Ether Vapor and the ALLTYNEX trilogy fail to imitate. 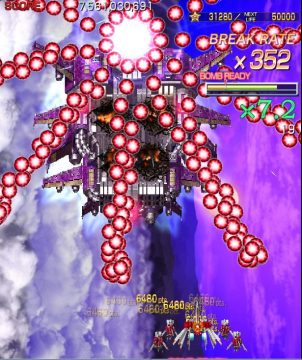 The original release’s excellent sales at Comiket 79 earned a later arcade port. This was published through Taito’s NESiCAxLive digital distribution service, which allows arcade operators who own cabinets powered by the company’s TYPE-X family of boards to download games for their customers’ enjoyment, instead of having to switch ROMs/discs every time he or she wishes to change or update the games being displayed at the establishment. This method has allowed many smaller developers to break into the modern arcade scene due to its low cost of admission and serves as proof of Crimzon Clover’s success, though it was only after the upgraded version was released in 2014 (subtitled World Ignition) that the game reached Western shores through Steam and GOG.

World Ignition was first served as an update to the arcade original, and it changes several of the game’s aspects to make it more suited for this new environment: continues are unlimited (as long as the player has credits to spare, of course), scoring potential is now cranked up to 11, Boost Mode is included instead of Simple Mode, and the Type III ship is introduced. Further, all of the PC original’s extras that were unlockable through in-game currency – such as additional credits and the Type Z ship – are now either built into the game by default, or unlockable through playtime. The hardware is (mostly) based on low-to-mid-range gaming PCs. Accordingly, the Steam and GOG releases are direct ports of that version. The only additions to it are the alternate soundtrack and Superplay DLC, which are both cheap and completely optional.