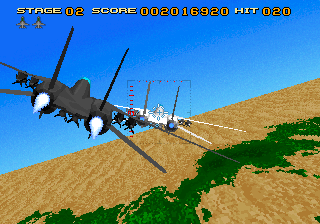 Strike Fighter is essentially a variation on G-LOC, except it’s more faithful to the original After Burner. The pace is much faster, there’s no time limit to worry about, and the level-based structure has returned. You also have unlimited missiles now, which is quite an improvement. The graphics engine is practically the same as G-LOC‘s, and the first-person cockpit view returns, except for when enemies get on your tail. There’s a greater visual variety in levels, and some of them are excellent, especially the stage that takes place over lava. While the gameplay is faster, it still suffers from the slow turning speed of G-LOC, and the music is still fairly forgettable. While it’s a pretty decent game, it lacks the intensity of the original After Burner and its sequel. Strike Fighter only saw release in Japanese arcades. 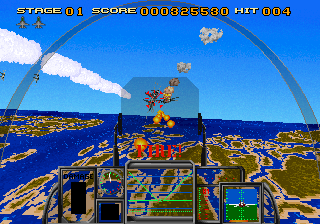 After Burner III is a bastardized port of Strike Fighter, ported by CRI. It was originally released on the FM Towns computer, before being ported to the Sega CD. Despite the relative strengths of both platforms, After Burner III looks noticeably worse than the Genesis ports of After Burner II and G-LOC.

There’s barely any detail to the landscape other than a handful of tiny sprites which are spread sparsely throughout, and it’s totally lacking the energy that made the previous entries so chaotically compelling. There are a couple of impressive visual tricks, however, like the take-off sequence and the transitions from first- to third-person views, both of which are exactly like the arcade version of Strike Fighter. Plus, some of the animation is quite nice, and the landscape rotation is the smoothest of any of the 16-bit versions.

The Sega CD release adds an optional third-person view to make it feel like the older games. However, your plane is gigantic and blocks too much of the screen. The only real advantage of the CD format is the opening cutscene, wherein some professional announcer rants about how awesome the F-14 Tomcat is. The soundtrack to the FM Towns version is a strange combination of jazz and electronica, and is far too laid back for a game about jet fighters. While the Sega CD version uses some of these tracks, most of the in-game music has been replaced with music from the FM Towns ports of After Burner II, which is far, far superior. 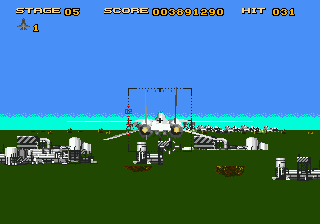 Although the Sega CD version is the better of the two ports, After Burner III is still an awful game. After this somewhat embarrassing release, it’s easy to see why the public didn’t exactly have confidence in the power of the Sega CD.