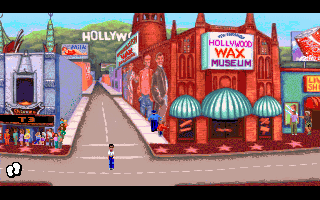 While Les ended up becoming CEO of his company in the last game, his buddy Helmut Bean ended up making it in Hollywood. However, a stalker has been kidnapping celebrities, including Bean and his extravagant girlfriend LaFonda Turner. Concerned with the wellbeing of his pal, Les takes a trip to Los Angeles to unravel the mystery.

Lost in LA uses a more advanced interpreter than its predecessor, utilizing 256 color VGA graphics, again making it look remarkably like Sierra titles at the time. There are, however, a couple of major differences. The interface only uses a single icon, where clicking on something will bring up a sub-menu allowing you to interact with it, which makes puzzle solving much easier. Since the whole game is focused on a handful of famous areas in Los Angeles – Hollywood Boulevard, Venice Beach, the corner of Sunset and Vine, and a movie studio parody called Paramounds Studio – it’s a little bit more open-ended than Search for the King, plus a lot of puzzles simply revolve around exhausting conversation options to trigger new events. 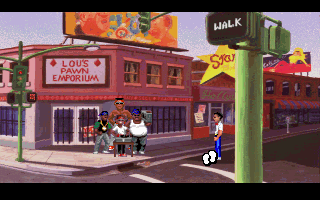 The humor is slightly more down to earth than Search for the King. Les isn’t exactly an exemplary protagonist – although that’s probably the point – but some of the secondary characters are amusing, like the street thugs known as The Boyz. They hang around shifty street corners and position themselves as the next great gangsta rappers, but they can’t rhyme for anything and they’re really just poseur street thugs that are driven around in their dad’s Lexus. Owing to the evolution in interface, there’s more conversation and characterization, though much of it is hit or miss.

There’s a lot of obvious Hollywood humor, the type that thinks it’s clever by poking fun at the propensity for numerous movie sequels. (Of course, back in 1991, Terminator 3 hadn’t actually come out yet, which sort of makes it funnier in retrospect, if you look at as a time capsule.) What other bits of humor are funny, but are clearly ripped off from other games. So Les impresses two mud wrestlers/strippers with his extensive knowledge of computer programming… except Larry did the exact same thing with a group of islanders at the end of LSL2. When Les tells a tourist company that he starred in a computer game and they rattle off an increasingly ludicrous series of better-known titles (“Were you one of the really important looking pirates in Monkey Island? The 1985 Atari XE/XL version of Fooblitzky? The 3-D scratch ‘n sniff Macintosh version of Leather Goddesses of Phobos?”), it’s worth a laugh or two, except both Space Quest III and Leisure Suit Larry III both were far more daring in breaking the fourth wall. And while it might seem clever that a character calls the Accolade help desk for some hints, Guybrush Threepwood did the exact same thing in Monkey Island 2. Due to all of this, Lost in LA has a harder time shaking off the fact that it’s just an alright game riding on the coattails of more popular titles.

Leisure Suit Larry 6: Shape Up or Slip Out!
Night mode