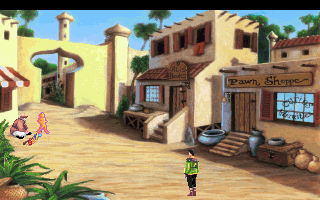 King’s Quest V is one of those games that was really only terrible in hindsight – everyone at the time marveled at its visuals and storytelling and overlooked its many, many dead ends. Still, someone at Sierra must’ve felt something was wrong, because King’s Quest VI is a remarkable improvement in almost every possible manner. The subtitle is a play on the phrase “Here today, gone tomorrow”.

The hero this time is Alexander once again. It hasn’t been long since he and the rest of the Graham family were rescued in King’s Quest V, but he can’t forget the face of Cassima, the scullery maid and slave of Mordack. She, like him, was also was captured royalty, and is actually princess of the Land of Green Isles. After inviting Alexander to visit her one day, she returns home, never to be heard from again. As it turns out, no one in Daventry has even heard of the place. When looking into the magic mirror, Alexander sees a vision of the lovely girl crying for help. Memorizing the night sky from his vision, he uses the positioning of the stars to set sail and find her. Naturally, a storm rolls in and leaves Alexander shipwrecked… conveniently enough, right in the Land of the Green Isles. Here he learns that Cassima has been imprisoned by the Vizier Abdul Alhazred and is being forced into marriage, with Alexander being the only hope of rescue.

The Land of the Green Isles is, predictably, an assemblage of five islands in close vicinity of each other and each inspired by a different theme. Alexander lands on the Isle of the Crown, the capital, whose castle and surrounding town have a flavor similar to Arabian Nights. The Isle of Wonder is full of bizarre characters, vaguely similar to Alice in Wonderland. The Isle of the Sacred Mountain is inspired by classic Greek and Roman mythology, complete with its own labyrinth and Minotaur, as depicted on the game’s cover. The Isle of the Beast is a small forest and home to a ferocious monster who desperately wishes for love, not unlike Beauty and the Beast. And the Isle of the Mist, initially kept hidden, is inhabited by a cult of blood thirsty druids. The ferry running between the islands is out of commission, so Alexander warps between them with a magic map, although he needs to be at the islands’ shores for it to work.

Each island is pretty small, usually consisting of no more than half a dozen screens (not including the labyrinth or the castle on the Isle of the Crown), but Alexander needs to travel between all of them constantly throughout the whole game. As in King’s Quest III, many of the quests revolve around finding items for a small handful of magic spells which are, thankfully, much easier to cast due to the icon-based interface – just combine the items, turn to the proper page of the spell book, click the “Cast” icon, and you’re set. It’s also a nice modern update to the structure of the old games, as each of the islands has its own unique identity that keeps everything from blending together. 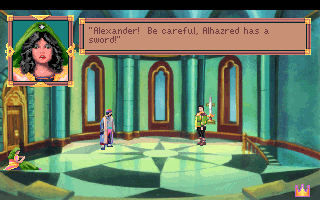 Having learned from some fairly significant mistakes, King’s Quest VI is a far, far better designed game than its predecessor. Some puzzles have multiple solutions, depending on what previous actions you’ve undertaken, and there’s a whole long optional subquest that involves rescuing Cassima’s deceased parents from the Realm of the Dead. The back of the box claims that over half the game is optional – this is a pretty big exaggeration, but it’s still a relatively significant chunk for something you don’t need to do. There are two different endings, with a handful of minor variations on each, depending on whether you take on this particular quest. Skipping it does not yield a bad ending in any way, but completing it definitely rewards you with an even better one. There are still ways to get stuck in unwinnable situations, but nowhere near the level of the previous game. You can find yourself stranded in the Minotaur’s labyrinth or the Realm of the Dead without the items you need, since you can’t leave at will. It’s also possible to forget items in places where you can’t return to.

The writing is substantially stronger this time around, largely the result of Roberta Williams’ collaboration with Jane Jensen, who later went on to create the Gabriel Knight series. The script to KQVI is reportedly four times the size of KQV, which enriches the game world in ways that are immediately evident. Jensen also wrote the “Guidebook to the Land of the Green Isles”, included in the packaging, which delves further into detail about the game world, and is also required for use in some puzzles on the Cliffs of Logic.

Alexander, like his father before him, is still a bit dry, with his only real trait being his remarkable drive to chase after Cassima. The supporting characters, including a friendly pawn shop owner, and a gossipy clown, show far more range than in previous games, acting more as personalities to chat with rather than mere devices for puzzles. This most clearly shines through on the Isle of Wonder, where grammatical concepts (Oxymoron, Dangling Participle and Diphthong) are represented by cute and furry animals, and you find yourself in a middle of a sibling rivalry between a literal stick-in-the-mud and a bump-on-a-log. Although Abdul Alhazred is the usual sneering villain of these types of stories, his underling is a rather incompetent genie who gets drunk on peppermints and stages several stupidly transparent attempts to trick Alexander into killing himself. As a cheeky reminder of King’s Quest’s rather frustrating lineage, you can browse the pawn shop and find a number of items that would’ve helped in the previous games, including a bridge repair kit (KQII), cat cookie mix (KQIII), a golden bridle finder and tongue climbing gear (KQIV), a hull hole detector for boats (KQV) and stair traction pads (pretty much any AGI-era Sierra game).

Whenever Alexander gets killed, you’ll see a short cinema of his ghostly apparition getting a ticket and walking into the gates of the Realm of the Dead, having failed in his quest to find his true love. It’s a wholly depressing scene, largely because the design of the place is so damned creepy (although it certainly doesn’t skip on the awful puns). You can revisit this section later in the game, while still alive. Rather than falling back on the fire-and-brimstone stereotype of the biblical Hell, it’s a dank cavern with unnaturally brown textures and plainly disturbing architecture, in addition to all of the creatures that would gladly separate Alexander’s soul from his still-living flesh. And yet, when you come across the entrance gates during this segment, the ones you’ve probably seen dozens of times when you’ve died, you can play a set of bones like a xylophone, triggering a musical number that features skeletons dancing in a chorus line while the guards totally boogie down. It completely undermines the dread of the environments in an excessively silly way, morphing an entirely dreadful moment into a strangely memorable one. 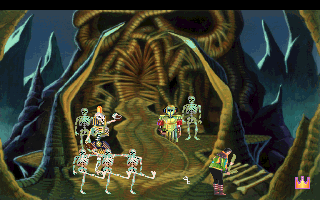 King’s Quest VI also benefits from Sierra’s experience as a multimedia studio. The voice acting is far, far better, having benefited from professional actors this time around. Alexander is played by Robbie Benson, best known as the Beast from Disney’s Beauty and the Beast, and he brings much dignity and enthusiasm to the otherwise standard role. Both versions, disk and CD, include a rendered intro depicting Alexander’s visions, his conversations with his mother, and his journey across the sea. Each version has slightly different cuts of this movie, with the CD version obviously being the longest. The disk version also uses completely different (and worse) voice actors. While Sierra made a big deal about these movies at the time, they’ve aged badly, suffering from ugly characters and an extremely choppy frame rate. More interesting is the vocal song, “Girl in the Tower”, a love ballad duet clearly trying to ride the coattails of similar Disney songs from Aladdin and Beauty and the Beast. It’s bland but tolerable, and certain CD versions have it playable as a redbook audio track. The original release had a list of phone numbers of radio stations who’d been provided a copy of the song, urging customers to call it and request it for on-air play. While it was a neat marketing ploy, the song itself obviously never caught on. The Windows version features high res character portraits, although the rest of the visuals are the same as the other versions.

King’s Quest VI is almost in an entirely different league than its predecessors or sequels. Whereas the previous games just slapped together various themes and tropes and ran with them, this installment is a far richer, and more wondrous adventure, easily one of Sierra’s best. 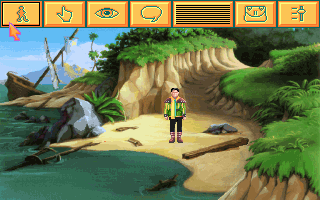 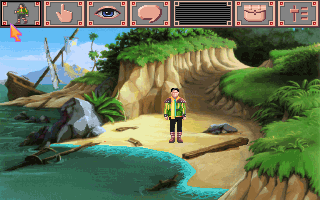 Leisure Suit Larry 6: Shape Up or Slip Out!
Night mode