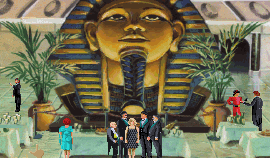 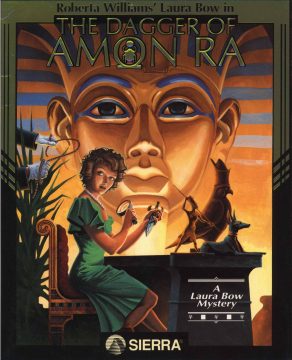 With the traumatic night at the Dijon Manor behind her, Laura finishes up college, bids farewell to Louisiana, and starts her new life as a newspaper reporter in New York City. Her first assignment is to cover the Egyptian exhibit at the Leyendecker Museum, which is slightly complicated by the fact that its centerpiece, the Dagger of Amon Ra, has mysteriously gone missing. Things get worse later that night when, during a party, the bodies start piling up, and each of the remaining characters has their own motive. Is it Ziggy, the extremely shifty speakeasy owner/stool pigeon? Pippin Carter, the snobby archaeologist who discovered the dagger, or Dr. Ptahsheptut Smith, who believes the dagger belongs to the people of Egypt? Or perhaps it’s the cold and calculating Dr. Olympia Myklos, or the sultry French secretary Yvette Delacroix? Maybe it’s the Colonel Klink-esque security guard Wolf Heimlech or the curator’s ex-wife, the Countess Waldorf-Carlton? Going above and beyond her role as a mere reporter, it’s up to Laura to solve the mystery and bring both the thief and the murderer to justice. 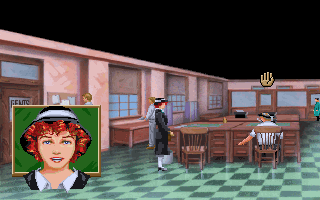 Despite Roberta Williams’ name on the box, she had little to do with The Dagger of Amon Ra beyond providing the concept and lending her character to star in a new game. Instead, it was directed and designed by Bruce Balfour in his first adventure game with Sierra (he had previously worked on other titles like Neuromancer and Wasteland) with writing contributions from Sierra mainstay Josh Mandel. While The Colonel’s Bequest was an attempt to create an interactive mystery novel, its sequel is a slightly more traditional adventure game. 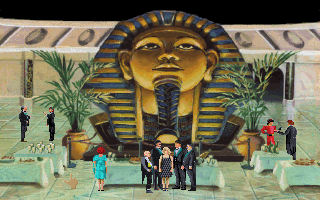 Once again, the story is divided into several acts, although the scope is much larger. The first takes place as Laura explores the city, investigating some of the people that will soon become involved in the plot. The second is, again, mostly for setup, as Laura attends the museum party and spies on the various attendees, learning of their personalities and their conflicts. Questioning people plays a huge role in these chapters, a sore point in the original due to the text input. This is something that should be easier due to the mouse-based input here, but really isn’t. To ask a question, you need to click the “question mark” icon on someone, which brings up Laura’s notebook. Then you need to go into a section and choose a topic, right click to change to the “exit” cursor and left-click again to actually exit. Why not just list all of the topics and have them immediately respond when you click it, like what was eventually implemented in Gabriel Knight? Once you reach the end of this act, the first murder takes place, and more characters begin to drop like flies as Laura explores the museum and its many hidden passages. It’s here that The Dagger of Amon Ra most closely resembles its predecessor. 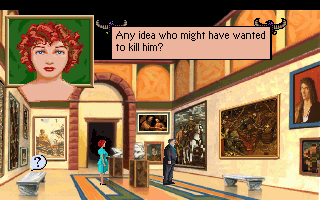 Each act usually consists of a handful of time blocks, although this time they’re triggered by passing events or solving puzzles instead of simply walking into a certain room at a certain time. Still, the time blocks are not handled in any logical manner. Previously, these events were intended to identify where each of the characters was at a specific point in time, giving the impression that everyone had their own schedule. The Dagger of Amon Ra largely ignores this notion, because you will find the French girl seducing three different men in three completely different locations, all within the same short time span. It’s somewhat disappointing that such a unique concept was mangled in this game. 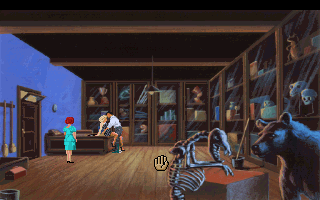 The final chapters act as “tests”, more or less. The fifth chapter is an action-packed chase scene, as the murderer tracks the defenseless Laura through the museum. These sort of timed sequences are irritating enough on their own, but they’re much worse here, because your success is entirely dependent on objects gathered earlier in the game, most of which are fairly easy to miss. The sixth act consists entirely of an interrogation, as the coroner seeks to piece together the mystery of the Dagger’s disappearance, as well as the murders. Unlike its predecessor, the game does not reveal the killer, so your understanding is entirely dependent on the notes you’ve taken, and the questions you’ve asked. For each of the crimes, you need to point out the perpetrator, as well as the motive, in addition to other questions. You also need to have gathered all of the required evidence to implicate the criminal. If you fail either of these requirements, then you’re left with the bad ending, which is so overwhelmingly bleak that it wraps around from “depressing” to “borderline hilarious”. Perhaps this over-the-top style was done to soften the blow, because it’s practically impossible to get the good ending the first time through. It’s also a stark contrast to The Colonel’s Bequest, which let you get a satisfactory ending even if you had no clue what was really going on. There’s a lot to pay attention to, and the mystery is quite confusing, especially if you’ve missed any of the vital clues. 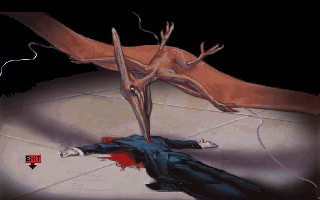 The Dagger of Amon Ra uses the SCI1 engine, and while the visuals are missing the dark creepiness from the first game, they still do a good job of replicating the 1920s era. In keeping with that, the museum isn’t quite as moody but it is atmospheric in its own way. On the surface it’s a bit small, consisting of a main rotunda, a gift shop, and exhibits on Egyptian artifacts, medieval armor, dinosaurs, death masks, and paintings. But there are numerous hidden passages, leading to underground storage rooms, laboratories, offices, and shrines (!!), giving the whole place a sense of wonder and mystery. And while the deaths in The Colonel’s Bequest were relatively bloodless, they’re quite gory here, with the first victim found in a sarcophagus with a dagger through his heart, the next impaled by the beak of a fallen pterodactyl, and the next stabbed to death with a porcupine. Combined with the chase scene near the end of the game, there’s a greater sense of danger, even though most of the deaths come from Laura doing stupid things, like falling down steps, or getting attacked by snakes, rats, and in one case, flesh-eating beetles. 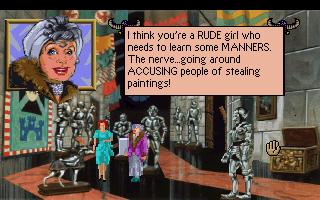 While the plot itself is quite serious, the writing, particularly the narration, is fairly sarcastic. Look at one of the suits of armor and you’ll be rewarded with no less than four dialogue boxes going off on a diatribe about the differences between barbutes, sallets and basinets, only to conclude that no one really cares. When you go into the alcohol preservation lab, you’ll find not only the corpse of a unicorn, but the body of King Edward of Daventry, which is quite bizarre. Laura has much more of a personality this time around, with her naive exuberance clashing with the sexism she faces in being a woman doing a man’s job. Once again, the remaining characters are all stock clichés, although they have much more personality. There are still some oddities; for instance, why are all of these people still hanging around the museum if there’s a murderer afoot? At one point the janitor lets it slip that he lost the keys and therefore everyone is simply locked in, which is still a flimsy plot contrivance, even if it’s meant to be tongue-in-cheek. 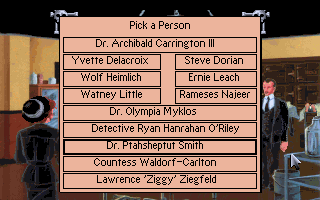 The CD-ROM version ditches the copy protection – which asks questions about Egyptian artifacts and gets Laura fired if you get them wrong – and also adds voice acting. Laura Bow’s slightly overdone Southern accent is still somehow charming, and the narrator’s polite British mannerisms make the sarcastic writing all the more amusing. The rest of the cast ranges from serviceable to horrendous, largely in part because the characters have a variety of accents and speech impediments, and the amateur crew just can’t pull them off. 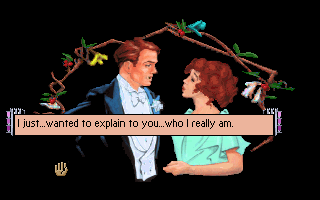 The Dagger of Amon Ra didn’t quite take off, and thus spelled an end for the series. Sierra continued with mystery games with the Gabriel Knight series, which ditched the “uncover the mystery for yourself” parts and replaced them with a dose of supernatural fiction. In one of the posters in the first Gabriel Knight game, you come across a poster advertising an event with the speaker Laura Dorian, revealing that she had settled down and married the hunky stevedore from The Dagger of Amon Ra. She also stars in Crazy Nick’s Pick: Parlor Games with Laura Bow, a budget release containing a few minigames.