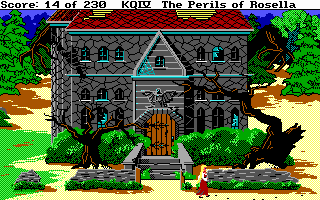 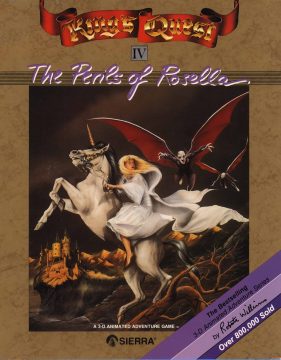 King’s Quest IV begins with Alexander returning home, and the royal family united once again. Before their happiness can truly settle in, King Graham has a heart attack and falls ill. He will die, unless he receives a magical fruit from the land of Tamir. Rosella is teleported to the faraway land with the aid of a fairy named Genesta. However, Genesta is in a weakened state due to her nemesis, the evil witch Lolotte. So Rosella not only needs to find the fruit to save her dad, but also cure Genesta so she can return home. The subtitle, The Perils of Rosella, is inspired by the classic serial The Perils of Pauline.

King’s Quest IV represents a major step forward in technology for Sierra, as it’s their first game to utilize the then-brand-new SCI engine. Although still limited to 16 colors, it doubled the resolution to allow for substantially more detailed graphics, in addition to adding support for MIDI music. Although you still interact with the world using a text parser, you can now command your character to walk with a mouse pointer, although the pathfinding is dreadfully simple. Rosella can also swim on her own without being told to, a great step forward in the intelligence for video game characters. 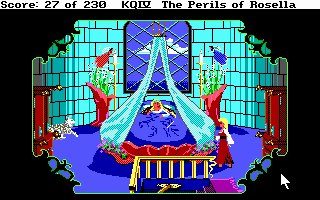 At the time, Sierra wasn’t sure if the PC gaming public had the proper hardware to run this new interpreter, so it also released a separate version of the game using the old AGI engine. It runs at a lower 160×200 resolution and is missing the niceties of the improved interface, but is structurally the same as the SCI release. The AGI version also has a hidden Easter egg near the end of the game, where you can visit with the game’s development staff in a futuristic room. (There is also a flying hamburger in the background, for some reason.)

Regardless of the version, Sierra hyped up King’s Quest IV as one of the most important computer gaming events in its history, a true work of art on par with literature and cinema. One of their advertisements asked, “Can a Computer Game Make a Person Cry?”, before answering its own question with “King’s Quest IV did on June 4, 1988.” The back of the box brags about long cutscenes and over 40 minutes of music written by film and TV composer William Goldstein. It sure has a high opinion of itself, and goes a little too far by popping up with Roberta Williams’ face whenever you die or try to quit. She’s quite an attractive lady, although her portrait in game looks positively horrifying, from her misshapen jaw to her overabundance of eyeliner.

Of course, technology has marched on in the decades since, and what apparently stirred up tremendous emotions from gamers at the time is now positively quaint. What remains is, more or less, another King’s Quest game. Once transported to the land of Tamir, Rosella is ordered to run a number of tasks for the evil Lolotte. These include capturing a unicorn, stealing a golden egg-laying hen, and uncovering Pandora’s box. As before, you’ll run into characters like the Seven Dwarves (with Rosella playing the part of Snow White), the giant ogre from Jack and the Beanstalk (although without either Jack or the Beanstalk, strangely enough), as well as other brief appearances by Cupid, the arrow-slinging cherub and Pan, the dancing fawn boy. Lolotte herself is very clearly modeled after the Wicked Witch of the West from The Wizard of Oz, complete with green skin and flying monkey bodyguards. The quest also runs on a real-time clock, as Rosella has exactly one in-game day to complete all of the tasks, forcing you to get your act in gear. It’s divided into two halves – day and night – and certain puzzles can only be completed at specific times, which can naturally muck you up if you dawdle.

With Rosella being the first leading woman in adventure gaming, a few aspects play up her femininity, like having to kiss a frog to turn him into a prince. Lolotte’s son Edgar also takes a liking to Rosella – despite him technically being an evil prince, in the same shade of green as his mother, he actually turns out to be a pretty alright guy, although the romance between him and Rosella is unfortunately brief.

The most infamous section is when Rosella is swallowed by a whale and needs to climb out by scaling its tongue and tickling its uvula with a feather, causing her to be sneezed out of its blowhole. It’s not technically all that difficult, but it’s impossible to tell what parts of the tongue are climbable and which aren’t, so there’s no way to do it without lots of trial and error (and save scumming). The annoyance of this section was acknowledged in Leisure Suit Larry 3, where the characters break out of their world and witness Rosella repeatedly trying and failing in her climb. The whole point of this is to get shot out onto a deserted island, which contains a bridle you later need when capturing the unicorn. Said bridle though isn’t even a single pixel – in fact, it’s entirely invisible, hidden behind an innocuous piece of wreckage. 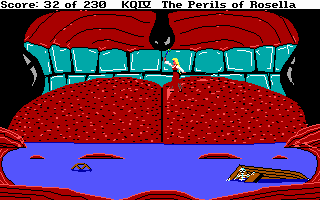 However, simply delivering all of these items only ensures safe passage back to Daventry. In order to actually save King Graham, you need to go on another subquest to find the magical fruit. This task is technically optional, but shirking this responsibility will result in Rosella returning home, only to witness her father, the first true hero of the King’s Quest series, die before her eyes. All of the talk of the game making one cry is definitely overdone, but this is indeed pretty rough to watch, and might actually be more interesting than the “good” ending, as cruel as that sounds, just because it’s so atypically tragic. (The bad ending is not canon, of course, considering Graham returns as the hero in the next King’s Quest.)

The original Sierra releases are the only versions of King’s Quest IV available. A fan-made VGA remake has been in the works for a few years, but nothing has been released outside of some demo footage. 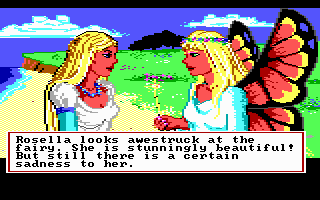 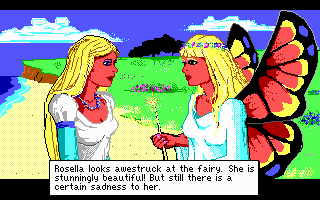 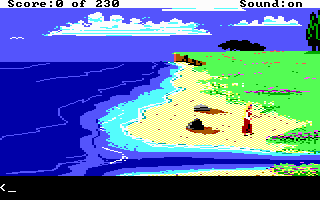 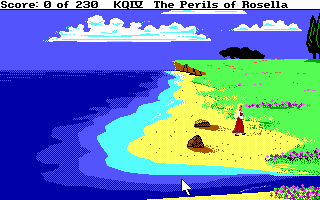