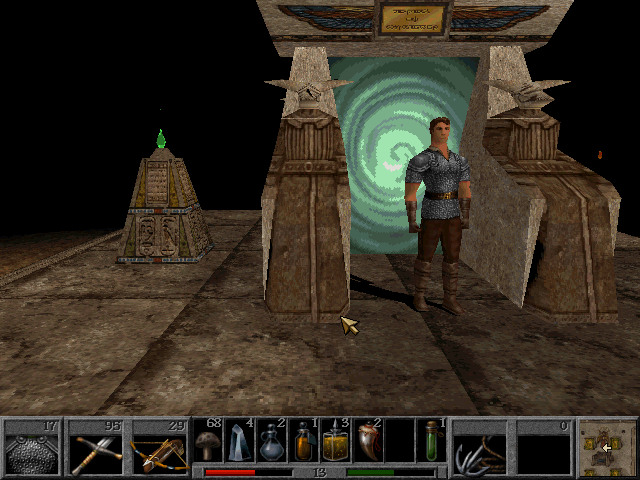 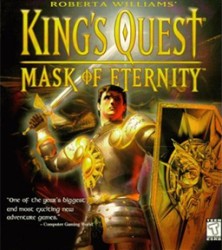 By 1998, adventure gaming was dead, or so everyone seemed to be saying. With the shift in the computer gaming marketplace targeting faster paced action games, Sierra decided to completely revamp King’s Quest, ditch nearly all of the adventure elements, and turn it into an action-RPG. The result is a game that’s almost entirely unfamiliar. The lack of a roman numeral suggests that this eighth and final installment was meant to be spinoff rather than a true sequel, but it is known as King’s Quest VIII in some European territories, negating that particular excuse.

The eponymous Mask of Eternity, held in the Realm of the Sun and watched over by magical beings called Archons, has shattered and brought ruin to Daventry. It has cursed all of its inhabitants and turned them all to stone except one – a young tanner named Connor Maclyrr, who finds a piece of the mask and is tasked with finding the others. 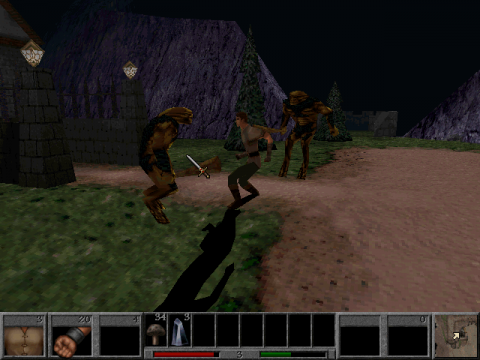 King’s Quest has fully moved into 3D with this installment, with only limited success. The blocky character models have aged terribly, although they’re animated fairly well for the era. But far more offensive is the drastically limited draw distance, which puts even the most fog-ridden Nintendo 64 games to total shame. The character movements are controlled with the keyboard, using the Resident Evil-style tank controls, with up moving forward, down moving backward, and left and right turning side to side. All actions are handled with the mouse cursor, including fighting – accomplished merely by clicking rapidly – and picking stuff up.

Nearly all of the traditional adventure elements are gone. The land is divided up into seven different territories, with the goal simply being to explore them completely, hack some enemies to gain some levels, and move onward. There are occasionally people to talk to, but interactions with them are fairly sparse. Your inventory consists entirely of weapons, potions, and other restoratives, along with a grappling hook. These items are almost never used for puzzles, which here involve the jumping or block-pushing variety.

There’s barely anything here that could signify this as a King’s Quest game – sure, the hokey intro movie refers to the king as “King Graham” and the opening level is “Daventry”, bearing absolutely no resemblance to how it appeared in the first game. One of the levels, the Dimension of Death, even seems redundant after the Realm of the Dead in King’s Quest VI. (Apparently they’re different, being legends particular to each land’s mythology.) There’s no trace of any fairy tales or classic mythology or even any sense of humor. About the only laughs come from how comically bloody it is, as enemies’ heads will fall right off after being punched a few times, or cough up streams of blood before falling face first into the dirt. You can also walk in on a goblin farting in an outhouse. This game is not exactly a class act. 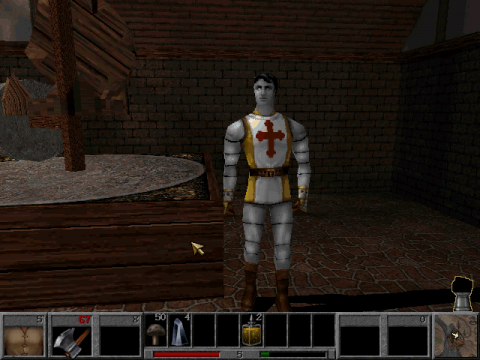 It’s hard to see who Mask of Eternity is really aimed at. Action fans will be bored by its slow pace and simple combat. RPG fans will find it too stripped down and straightforward compared to purer experiences like Baldur’s Gate. And, as established, adventure fans will find none of the puzzle solving, storytelling, or atmosphere that they would come to expect. It’s not unplayable by any means; it just barely succeeds in any real way.