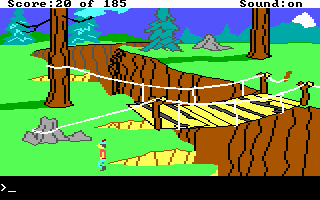 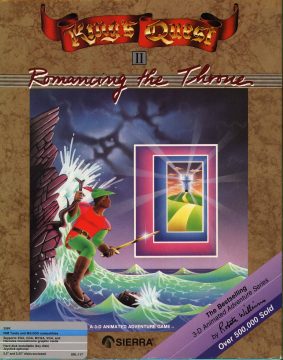 Having won the crown of Daventry, King Graham realizes that his rule is a bit lonely without a queen. Rather than taking the usual dating route, he looks into the magic mirror and sees the visage of a beautiful young woman held captive in a quartz spire by a witch named Hagatha. His adventurous spirit leads him to rescue this fair maiden, which takes him to the land of Kolyma. The subtitle is a reference to Romancing the Stone, a Robert Zemeckis film released in 1984.

There’s not a huge difference between King’s Quest II and its predecessor. It runs on the same interpreter, looks more or less the same, and has the same basic fetch questing. The overall goal is to find three keys which unlock a mysterious door on the east side of Kolyma. Unlike its predecessor, where you could accomplish any of your tasks anyway you liked, here you need to find each key in order, giving it a more rigid structure. While Kolyma loops around north or south, it has definite barriers on the east and west sides. 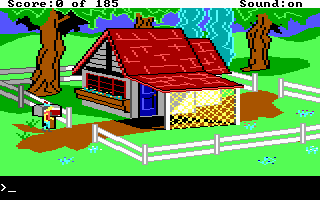 Despite the change in name and the different geography, Kolyma is much like Daventry, consisting of forests, lakes, swamps, and a mish-mash of allusions to literature, fairy tales, and mythology. You’ll find Little Red Riding Hood running around on one screen, and Neptune, God of the Sea, just a few screens over. One task involves finding a genie’s lamp to grant a series of three (predetermined) wishes, one of which awards you with a magic carpet out of the Arabian Nights, while another quest will put you toe to toe with Count Dracula.

Many of the “puzzles” simply involve rooting around in trees, logs, and other holes to find various artifacts, some of which are simply treasures that increase your score but have no other real use. There’s a bit of weirdness to some of these – one of them will cut to an impromptu advertisement for another Sierra game, and if you have the right luck, you can catch the Batmobile driving around outside one of the caves. You’ll still randomly be accosted by witches, dwarves and enchanters, although you can still be blessed by one of the kingdom’s fairies to render yourself temporarily safe from their attacks.

The most remarkably cruel aspect of King’s Quest II is a rickety bridge, which leads to the door you need to unlock. It never clues you in, but you can only cross this bridge a very, very limited amount of times – in fact, only enough to allow you to beat the game. So if you cross it one too many times, it’ll collapse, and you’ll be completely unable to continue. Some kind of warning would have been nice! (This bridge was later referenced in Freddy Pharkas: Frontier Pharmacist.)

There’s not much to say about King’s Quest II, except that it’s more of the same. It does little to improve the formula, but doesn’t really screw it up much either.

In 2002, AGD Interactive remade King’s Quest II, updating it to use 256 color graphics, a point-and-click interface, MIDI music, and full voice acting, roughly in the style of King’s Quest V. While their remake of King’s Quest I was largely based on Sierra’s own revision, they put substantially more work into recreating the sequel, to the point where it far exceeds any of the work Sierra themselves put into any of their VGA remakes. There are numerous cinemas, the script was rewritten from scratch, and it really is practically an entirely new game that takes the original and runs in a whole different direction. 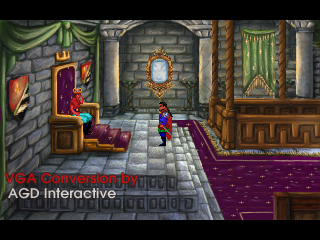 There’s a brand new intro which shows Graham talking to one of his advisors, and he arrives in Kolyma via boat, rather than simply showing up on its shores. The magical door is no longer plopped in the middle of the woods, but rather it’s a talking rock formation in the side of a mountain. Instead of three keys, you need to get three stones, hence the change in the subtitle, “Romancing the Stones”. And the bridge no longer collapses either, thankfully.

The geography of the land is similar, but has gone through numerous alterations. It’s technically a bit smaller and no longer wraps around at all, but the swamp is its own maze, and there’s now a small town to the north. The plot is greatly expanded, and many of the other characters have not only been fleshed out, but some have been reimagined considerably. Count Dracula has been changed to Caldeur, and while he still lives in a creepy castle in the middle of the swamp, he isn’t quite as evil, nor quite as blatantly plagiarized. Little Red Riding Hood is now named Possum and does quite a bit more than simply handing you some food. Hagatha’s role is fleshed out and tied more closely to the King’s Quest storyline told in later games. Connor Maclyrr, the hero of King’s Quest: Mask of Eternity, even makes an appearance.

The basic tasks are very similar but have been drastically expanded. You still need to go underwater to meet with King Neptune, but here you spend much more time riding the seahorse, including an arcade sequence. There are numerous additional puzzles, including one where you need to reunite a talking baby pumpkin with its family. On the same note, some aspects have been removed, like the fairy, and other puzzles have changed.

It’s a different enough game that it’s probably worth playing both side by side to compare and contrast them, but there’s no doubt that the remake is a more engrossing, and ultimately much more enjoyable product. Some fans have expressed annoyance with the way the writers played with the King’s Quest canon though. 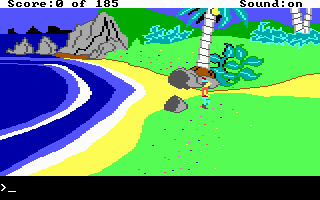 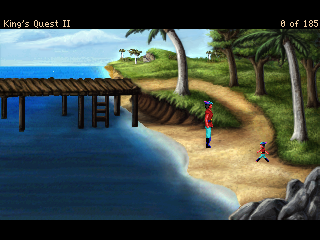