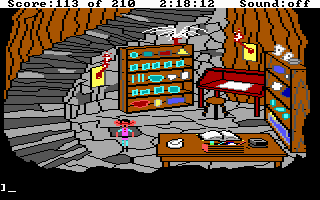 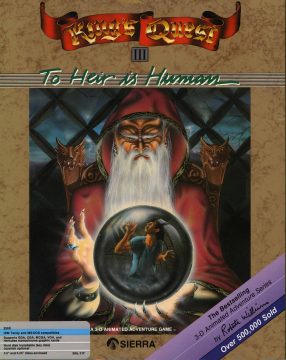 King’s Quest III leaves behind the adventures of King Graham and instead focuses on the life of a young boy named Gwydion. This poor young orphaned boy lives under the servitude of the evil wizard Manannan, an abusive bastard who will quite literally kill the boy if he’s lax in doing his chores. Obviously needing to escape, your goal is to sneak into Manannan’s study, learn to create some magic spells, and scour the land of Llewdor to find the perfect ingredients to get rid of your captor once and for all. The subtitle is a play on the term “to err is human”.

King’s Quest III works on a real-time clock, which is displayed at the top of the screen. This is important for tracking Manannan’s location, because he takes journeys in roughly half-hour cycles. When he’s away, it’s a race against the timer to collect all of the items you need, store them in some place he won’t find them, and make sure to cover your tracks so he can’t tell that you’ve been mucking around in his room. It’s a remarkably tense experience, even though it can get quite frustrating if you take too long and inadvertently get caught. 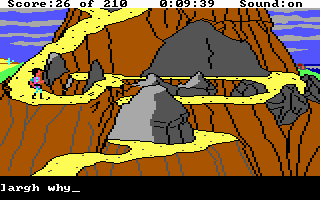 The realm of Llewdor is quite small compared to Daventry, consisting mostly of a small town, a cottage inhabited by three bears (you need to steal their porridge for one of the spells, and can sleep in one of their beds, if you feel like causing trouble), and a never ending desert inhabited by the snake woman Medusa. However, you can find a magic map that can warp you anywhere almost instantly, with one small issue. Manannan’s house is on top of a mountain with a narrow, windy path, which needs to be navigated very carefully. The map will only transport you to the base of the mountain – each and every time you want to return to the house, you need to walk this same narrow path upwards, which gets quite harrowing if you’re running short on time.

Creating spells is also a gigantic hassle. In addition to the numerous items you need to create the half-dozen or so magic spells, you need to use them in the precise order and speak a number of enchantments. Since the original release is entirely text-based, you need to type in each and every one of these commands – if you forgot to get an item or make a typo (even a misplaced comma), you’ll screw up the process and inflict some comical ailment on yourself, triggering a Game Over. Not all of the spells are necessary, but some of them allow for alternate puzzle solutions. Of course, once you leave Llewdor there’s no way to create any more spells, so this is an easy way to mess up your game.

Once you’ve finally gotten rid of Manannan, the game leads you to stumble on its twist – that Gwydion is actually the long-lost son of Graham and Valanice, who had been kidnapped in his youth. An oracle tells him of his twin sister Rosella, who has been kidnapped by a three headed dragon, so Gwydion signs up with a group of pirates to take him back to the land of Daventry to save the kingdom and become reunited with his family. It’s here that King’s Quest III mostly drops its adventure game pretenses and instead turns completely linear, as you navigate a series of mountain paths to find your way to the dragon’s lair. This generally involves walking along narrow paths or climbing over rocks, always the most clumsily implemented aspects of Sierra’s AGI games. The first part of the game is fairly strong, so it’s a shame that it ends up on such an annoying note. 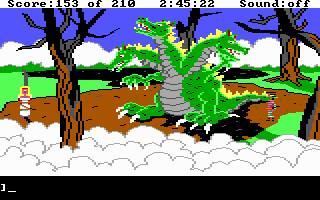 There are not one but two fan remakes of King’s Quest III. The first, released by Infamous Adventures in 2006, is a pretty faithful recreation of the original game, while the second, released in AGD Interactive in 2011, is a more substantial overhaul. Both were created with Adventure Game Studio and feature the same interface, VGA-style graphics and full voice acting. The assets in both cases are completely different, though. In general, the graphics and voice acting in the AGDI version are far superior over Infamous Adventures’.

Both versions are similar in expanding the land of Llewdor, as well as removing the looping in favor of natural boundaries. Some of the puzzles have been changed – you need to figure out a password to get into Manannan’s lab in the AGDI version – and the spell enchanting is much less irritating, largely thanks to the icon-based interface. There are also numerous cutscenes to flesh out the story – the Infamous Adventures’ version depicts Gwydion’s nightmares of being kidnapped, and another that ties the characters from King’s Quest III with the events of King’s Quest V, while AGDI’s version also not-so-subtly gives away the twist. The major difference between the two is that Infamous’ version stays very close to the storyline of the original game, while the AGDI version expands it a bit, and ties in a bit more with their KQII remake. Indeed, the AGDI version is the better of the two, besting the Infamous version in practically every category, but both are fairly decent, and are more enjoyable ways to experience King’s Quest III than playing through the AGI original.