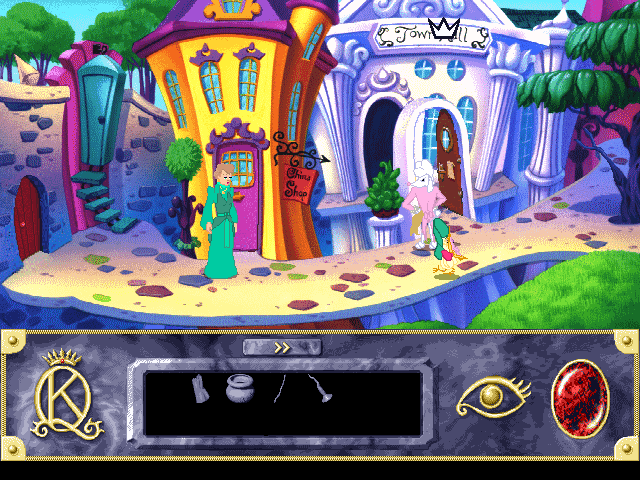 After King’s Quest VI, Roberta Williams took a break from the series and attempted to push forward the gaming medium with Phantasmagoria, a live action full motion video horror game. It was a marked departure from her other games, being that it was frightfully gory in spots, in the name of making games “for adults”. When she returned to the King’s Quest series with the seventh game, she went in the total opposite direction of Phantasmagoria, instead turning her series into a Disney cartoon. It is indeed a fantastic looking game but, like King’s Quest V, the march forward in visuals meant the actual game had to suffer. 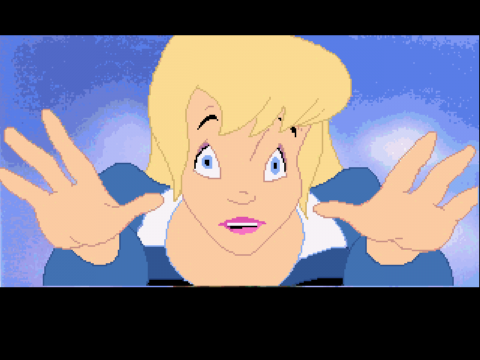 King’s Quest VII stars the women of Daventry, with Rosella returning alongside Queen Valanice, marking her first (and only) appearance as a playable character. The animated intro depicts Rosella singing a Disney-esque ballad about how she doesn’t want to get married yet, while her mother looks on sternly. The flighty princess is then distracted by a tiny flying seahorse, and both Rosella and Valanice are sucked into a pool, with both being transported to separate parts of another foreign world. The initial goal is, of course, to meet up and find their way home, but during their travels they come upon the scheme of Malacia, herself an amalgamation of various Disney villainesses, who wishes to execute a number of evil deeds. A secondary goal is to maybe find a groom for Rosella along the way, as the title implies. (It’s a reference to the cult classic fantasy adventure movie/novel The Princess Bride.)

The quest is divided up into six chapters, with the viewpoints alternating between Valanice and Rosella. Valanice starts off stranded in a desert and eventually ends up into the colorful town of Falderal. Rosella, in the meantime, gets turned into troll and is stuck getting betrothed to the troll king. Eventually she gets turned back into a human and ends up in Ooga Booga land, a Halloween-themed town that may well have been lifted from The Nightmare Before Christmas, before eventually meeting up with her mother and foiling Malacia’s plot. Like Phantasmagoria, you can start at the beginning of any of the six chapters at any time, in case you get stuck and want to see the later parts of the game.

The King’s Quest series were always meant to be family games, but the animated stylings, along with the generally broad themes, makes it feel markedly less mature than King’s Quest VI. In fact, it really does feel remarkably shallow, beyond just being “kiddie”. It uses the same basic interface as Phantasmagoria, meaning it only uses a single icon for moving your character or interacting with the environment. While perhaps done to make the game easier to play for non-adventure fans, without a “Look” icon, it completely removes the details of your surroundings. 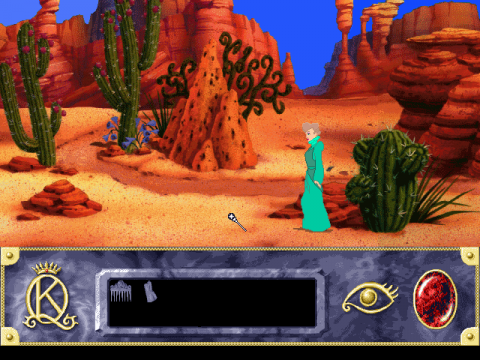 The dialogue, too, is incredibly sparse. Like the rest of the series, it features a number of strange and memorable characters, like an oddly friendly grave digger with a penchant for absurd machinery, a hilariously sexist troll, a bull who runs a china shop (a gag most kids probably wouldn’t get), a snotty poodle named Archduke Fifi le YipYap, and a slightly obnoxious take on Chicken Little. Also amusing is the Mock Turtle who runs a faux shop, which can only be entered by (literally) taking a grain of salt. The finale also marks the return of Edgar, Rosella’s not-quite love interest from King’s Quest IV. Much of the backstory explaining his connection was excised from the final game, so his appearance only makes sense upon reading some external documentation. While these secondary characters are colorful, the script barely gives them more than a dozen lines to shine, and it makes them seem remarkably thin. The leading ladies are fairly unremarkable too – here Rosella is a whiny spoiled girl with a slight valley accent and Valanice scarcely has a personality beyond her motherly mannerisms.

Although there are technically death sequences, you can pick up immediately before your fatal move. While this reduces some frustration, the save system has been cut down so you can only record one game at a time anyway. Instead of saving your progress in multiple spots, you simply move the “bookmark” to the new spot when you quit. It is also entirely impossible to make the game unwinnable, one of the few steps KQVII makes in the right direction. However, in keeping with the spirit of the older games, in certain areas it will randomly bring a dangerous character on screen, forcing you to exit quickly or be killed.

Beyond its general sparseness, King’s Quest VII is just astoundingly dull. As per standard procedures, you spend much of your quest running back and forth across the lands, gathering new items. Both of the characters move slowly, requiring roughly twenty seconds to saunter across a single screen, and running a simple singular fetch quest can take several minutes of aimless walking, walking, walking. Nearly all of the Sierra games from the past decade implemented speed controls to give the pacing a kick in the rear, so why is this absent from King’s Quest VII, forcing you to watch the same tortuous animations? The puzzles themselves are unimaginative at their best or stupidly convoluted at their worst. During your exploration of Falderal, the moon falls out of the sky (it’s merely a piece of cheese), and into a fountain. It looks like you should be able to reach in and grab it, but you can’t. Instead, you need to go through a roundabout series of events, starting with finding a wooden nickel randomly left in a bird’s nest, giving it to a shopkeeper to get a book, giving the book to another character (for reasons that aren’t entirely clear) to get a shepherd’s crook, and then using that to drag the cheese out. 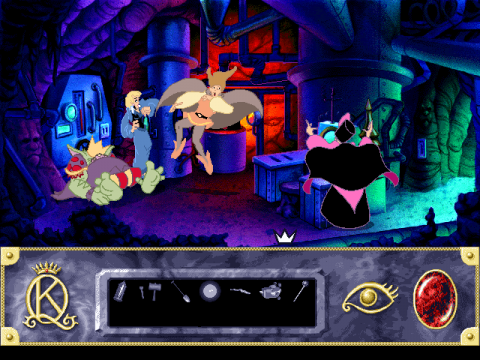 The developers at the time probably figured no one would mind, because it looks so gorgeous. Because hey! You’re literally playing a cartoon! To its credit, the game does look pretty damn good. The backgrounds are gorgeous, now that the visuals support SVGA graphics, and the paintings no longer suffer from the dithering that permeated the older SCI games. And for all of the time you spend watching people trot along, they are remarkably well animated, to the point where each action has incredibly fluid, unique frames of animation. And from a distance, the character artwork looks pretty good too – not on par with Disney, or even Don Bluth, but a fair bit better than the average Saturday morning cartoon. The few full motion video cutscenes don’t fare as well, though, as they’re hastily drawn, badly detailed, and suffer from both a low resolution and a dismal frame rate.

It’s weird that a game meant for a younger (or at least wider) audience is so incredibly boring – its intended charms are almost all but completely lost amidst the drudgery. Unfortunately The Princeless Bride was also the last “true” King’s Quest game, before ditching the adventure game framework in favor of action gaming in its next installment.