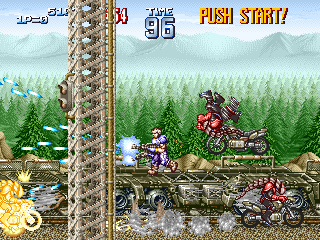 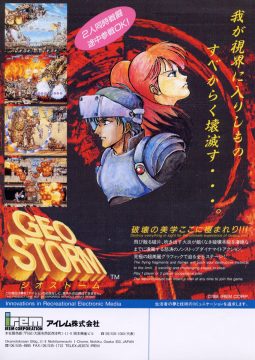 If you played GunForce, a thoroughly below-average run-n-gun with the occasional neat idea, you’d be forgiven if you skipped the follow-up. But you’d be missing out; GunForce II is an exponentially better sequel that improves on the original in every way.

Released in 1994, GunForce II (known as Geo Storm in Japan) was developed by Nazca Corporation for Irem, and is the latter’s last arcade game. Nazca Corporation were a group of developers that worked on a number of titles for Irem that shared similar graphics and design, including Armed Police Unit Gallop, Superior Soldiers, Undercover Cops, and In The Hunt. Irem began facing financial problems in 1994, shuttering its arcade division, and Nazca Corporation upped sticks, made Neo Turf Masters and Metal Slug: Super Vehicle-001 for the Neo-Geo, before they signed with SNK to make the rest of the Metal Slug franchise. 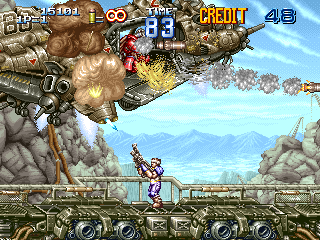 Taking control of either Max (a pal can join you as Lei) you fight across five stages, taking down enemy soldiers, mutants, aliens, vehicles, and more, for reasons too vague to mention. The best thing that can be said about GunForce II’s story is that the game is too entertaining to miss having one.

Anyone familiar with Contra or GunForce II’s predecessor will take to the controls right away – there’s a button to shoot in one of eight directions in combination with the joystick, another button to jump, and you can enter vehicles by jumping into them. Everything is faster, tighter, and more responsive, with leaping far less moon-jumpy than the original.

A neat twist to the gunplay is that you can now dual-wield your standard issue blaster with any special weapon you collect, and they will often shoot at different angles, providing some strategy. The special weapons span the run’n’gun gamut from lasers to flamethrowers, all with satisfying kick and kaboom. The vehicle-hijacking mechanic returns from the first GunForce, again much improved: there are now 11 different variations to commandeer, including motorbikes, tanks, hovercraft, and several types of mechas. Your aim is to defeat foes, collect medals for points, and save female POWs. GunForce II is a score-attack game – complete the last level, and rather than being greeted with a game over screen, you’re thrust back to the beginning of the first stage. 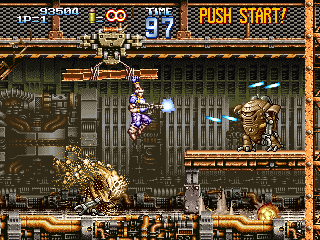 The first stage sees you fight your way forward on the back of a runaway locomotive, before taking down the insectoid, minigun toting robotic boss. Blasting your way through mechas as you push forward into an enemy base in level two, you’re faced with a steampunk tower on tank treads. Stage three takes the game vertical, asking you to climb chains while taking on hordes of foes, and then hop onto a motorcycle while you’re pursued by a crab-like robot, in a real highlight of the game. A post-apocalyptic ruined city forms the base of the penultimate level, before taking you skyward in an elevator for a face-off with a reptilian, bomb-spitting machine. Jumping into a ship at the start of the final stage, the game briefly turns into a shoot-em-up as you avoid missiles and blast a spacecraft to gain entrance. You’re instantly beset by a raft of extra-terrestrials, clearly influenced by H. R. Giger’s work on the Alien movies. The final boss is an unsettling centipede-like robot that dives at you as you work your way up a missile shaft.

Visuals have been massively overhauled, skewing more towards the first Metal Slug than the original GunForce. While not quite hitting the heights of the former, the graphics feature some wonderfully chunky and detailed pixel art, and punchy and expressive animation. Best of all are the bosses, from truly impressive steampunk behemoths that fill the screen to more alien creations in the second half. GunForce II is a busy game, too – between the enemies, pick-ups, explosions, and projectiles, there’s a lot to keep track of. You’ll be thankful, then, that the use of color and design means you’re rarely confused as to what’s going on, with most deaths feeling fair rather than cheap. The backgrounds help capture the future post-apocalyptic setting, with enough detail and variety to keep things interesting. It’s a shame there’s little in the way of parallax-scrolling, but what is here looks great, albeit with occasional slowdown when things get too busy. 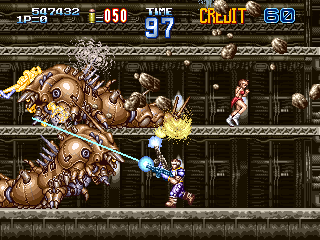 Heavy metal synth tracks complement the action perfectly, though you’ll be hard-pressed to hear them over the din of the mayhem on screen. A particular highlight is the repeating boss theme, all eerie foreboding that gets the pulse pounding during the game’s tougher tests. Several of the tracks are remixed or reworked versions of tunes from Nazca Corporation’s earlier effort, Air Duel. The sound effects are much better and more varied than the original GunForce, with some (notably the Wilhelm Scream-esque enemy cry) being later used in the original Metal Slug.

It’s believed that Nazca Corporation disbanded when SNK went bankrupt in 2001. It’s difficult to pin down who was who from the mysterious collective, as most worked under pseudonyms, including Akio, Susumu, Tomohiro, KOZO. It has been revealed that Platinum Games producers Atsushi Kurooka and Atsushi Inaba were part of the unit, and that composer HIYA/HIYA-UNIT was Takushi Hiyamuta. KIRE-NAG was Kazuma Kujo, who later formed Granzella Games, and Akio contributed illustrations to Street Fighter V: Arcade Edition and Mobius Final Fantasy.

GunForce II is a very good game, a must play for Metal Slug and run-n-gun enthusiasts, and a damn fun time for everyone else. With wonderful presentation and action-packed gameplay, it even outshines some of the Metal Slug franchise while not quite hitting the heights of the series’ very best installments. It was ported to the PC and Mac by DotEmu in 2011 as part of the Irem Arcade Hits compilation, along with the original GunForce and 16 other classic titles. Emulation is solid, as expected from DotEmu, and it’s the best way to play the game today.